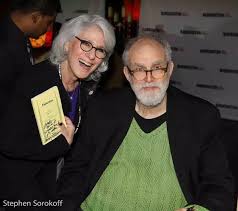 On Sunday, July 19, Jamie deRoy & friends presents a special interview with William Finn, filmed in 2007 at The Metropolitan Room. Best known for his musicals, which include Falsettos, for which Finn, won the 1992 Tony Awards for Best Score and Best Book, A New Brain (1998) and The 25th Annual Putnam County Spelling Bee (2005).

From the 2016 Broadway revival of Falsettos the cast performs “The Baseball Game”. They include Stephanie J. Block, Christian Borle, Andrew Rannells, Anthony Rosenthal, Tracie Thoms, Brandon Uranowitz and Betsy Wolfe. The show was filmed and is currently streaming www.BroadwayHD.com

There are guest appearances by Wendy Scherl singing “Anytime/I Am There” from Elegies: A Song Cycle and Sally Wilfert “I Have Found” from The Royal Family of Broadway.

A special thank you to Lincoln Center for the Performing Arts and Broadway HD for permission to use the clip from Falsettos.