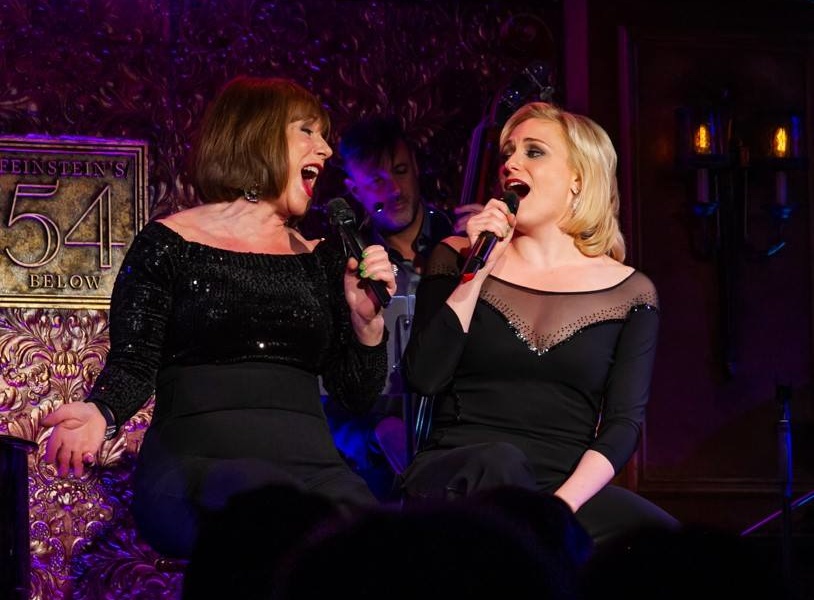 Jana Robbins & Haley Swindal’s, well put together show We Just Move On The Songs of Kander & Ebb has been selling out and it is easy to see why. Originally started at Feinstein’s/54 Below in August, I finally had a chance to admire what these two women can do and they can do it all.

These two have a lot in common, each having played the role of Sally Bowles in Cabaret. In green nail polish and black cat suits they started off with “We Just Move On” and “All That Jazz” from Chicago.

I sat there the entire evening wondering why Ms. Swindal was not on Broadway. Towards the end of the night, she shared the news that she would indeed be starring on Broadway as Mama Morton in Chicago for two weeks beginning March 4th and had gotten the news that day.

Jana started off the solo’s with “Life Is” from Zorba and made us really understand and feel the lyric.

“Why Can’t I Speak” and “Maybe This Time” from Zorba and Cabaret showed an emotional, well built tour de force performance from Haley. Her voice is comedic, yet really beautiful, with rounded out syllables that make us understand a lyric.

“I Don’t Care Much” from Cabaret (Jana), and “Sing Happy” from Flora the Red Menace, showed the duo again performing solos and showing off their acting and singing chops. As did “My Own Space” and “Sometimes A Day Goes By” from The Act/ Woman of the Year.

The duo started this journey after performing together in This Ones For The Girls. Haily, whose love for The Rink had her wanting to perform the show with Jana, who actually didn’t know the show. After seeing the two sing “The Apple Doesn’t Fall (Very Far From the Tree)”, “Chief Cook and Bottle Washer” (Jana), “Colored Lights” (Haley) and “We Can Make It”, I would love to see these two do this Kander and Ebb gem.

A hilarious “Grass is Always Greener” from Woman of the Year, had some fabulous parody lyrics Kudo for those.

Funny Lady was represented by “Isn’t This Better” (Jana) and “How Lucky Can You Get”(Haley).

One of my favorite Kander & Ebb songs a “Quiet Thing” from Flora the Red Menace was one of the songs that closed the show.

With Joe Goodrich on piano, Barbara Merjan on drums and Matt Scharfglass on bass the encore powerhouse “Nowadays” from Chicago  shimmered.

Celebrities and singers have been attending these performances and you can see why. In glorious voice Haily shines, but she is complimented by the consummate actress and director Jana. Ms. Robbins has a fabulous back and putting shows together and it shows in this cabaret that has you wanting more, not less.

Do not miss Jana Robbins & Haley Swindal: We Just Move On The Songs of Kander & Ebb: Feinstein’s/54 Below, 254 West 54th St. Feb 12th at 7pm. ***The show is sold out, but get on the standing line as this is one hot show and look for details about another up-coming performance.