Actress, singer, trumpet player, stripper, producer and consummate artist is what you get when you see Jana Robbins perform in her new cabaret act “I’m Still Here.” Starting out with “I Gotta Be Me” from the Broadway show Golden Rainbow, Robbins looks like she hasn’t aged. Elegantly dressed in black and diamonds she radiated a love of performing. In this show we get to know how Jana’s career started and we see a very personal side that is endearing. As she graced us with “Impossible Dream,” we learned Ms. Robbins arrived in New York when she was 20 and saw her first show in a bubble tent down near 14th Street…. Man of LaMancha. She got her first role at 21, but she wanted love, as she lapsed into a “Dream Medley.” With Jana it is not only her powerful belt but also her connection to lyric and strong acting choices. I loved hearing her sing Mama Cass’s “Dream A Little Dream of Me,” as strains of the show Gypsywere hauntingly subtle. Bravo musical director, singer and pianist Joe Goodrich. Next up a “Standard Melody” of “Time After Time,” “The Shadow of Your Smile” and “The More I See You.”

Ms. Robbins has done several Broadway shows, but the one she loved the most was where she played Mazeppa – the bump it with a trumpet stripper – while standing by for Tyne Daly as Mama Rose, a role she played for 40 performances to critical acclaim. The audience was treated to a Gypsy Medley of “Small World,” “You’ll Never Get Away From Me” and “Together Where Ever We Go.”

Next up “As If We Never Said Goodbye” from the show Jana had wanted to do Sunset Blvd. Back to Gypsy with “Everything’s Coming Up Roses” and Mazeppa ‘s version of “You Gotta Get a Gimmick” complete with trumpet solo, booty shaking and shimmy’s. Can I just say Bravo right now!

Jana may have produced Little Women but here she sang “Here Alone,” from the show. “Come In From The Rain,” led to an astonishing “I’m Still Here.” Once again you are reminded of just how great her phrasing and acting choices are. They are strong, they are different and they are unique and interesting.

Kudos to Jason, for great lighting and sound. The use of stars and the lighting around the stage was well done.

As with most cabaret shows Jana’s encore was the heartbreaking and tender “My Mother Was a Singer,” By Eileen Valentino sung to her mother who was in the audience. Dry eyes were rare after this tribute. “It Started With a Dream” by Cy Colman and David Zipple was the perfect ending to the set. 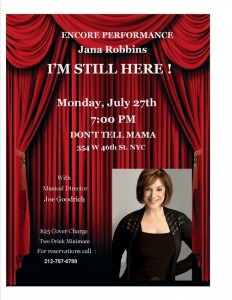 Broadway producers, Jana Robbins is still here and is a thrilling force to be reckoned with. Broadway and Cabaret singers, this is a performance not to miss.

Look back to this site for additional dates to this marvelous night of musical heaven. In the meantime I offer to you this amazing performance of Jana as Rose.

Pen lent by R.K. Greene. It’s amazing how many I lose.