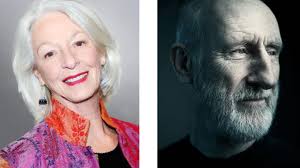 Bill (Cromwell) and Nancy (Alexander) have spent fifty full years as husband and wife.  They practically breathe in unison, and can anticipate each other’s every sigh, snore and sneeze.  But just as they settle comfortably into their new home in Grand Horizons, the unthinkable happens:  Nancy suddenly wants out.  As their two adult sons struggle to cope with the shocking news, they are forced to question everything they assumed about the people they thought they knew best.  By turns funny, shocking and painfully honest, Bess Wohl’s new play explores a family turned upside-down and takes an intimate look at the wild, unpredictable, and enduring nature of love.

Grand Horizons is co-commissioned by Williamstown Theatre Festival and Second Stage Theater. The commission is supported in part by The William and Mary Greve Foundation.