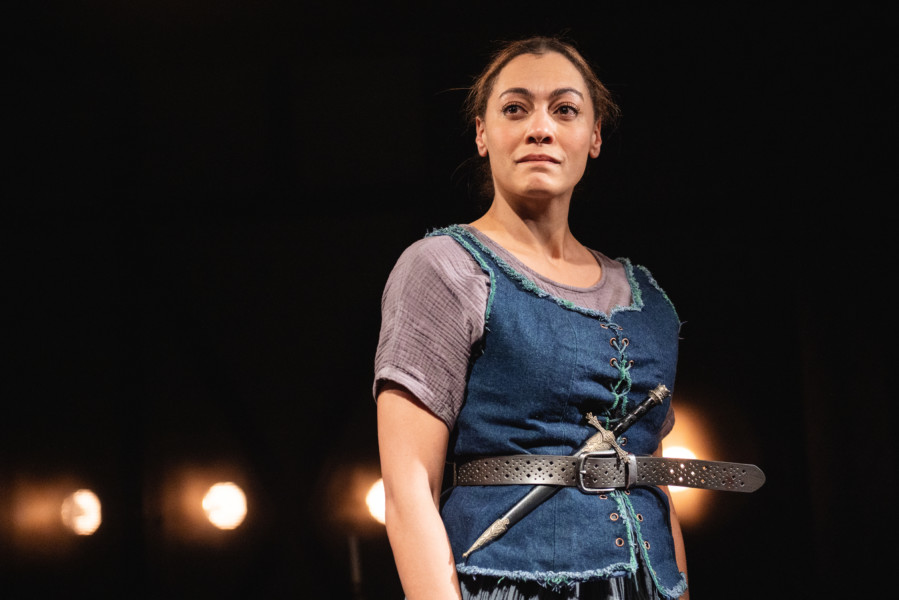 Talene Monahon’s The Lamentable Comedie of JANE ANGER, that Cunning Woman, and also of Willy Shakefpeare and his Peasant Companion, Francis, Yes and Also of Anne Hathaway (also a Woman) Who Tried Very Hard, is a Jacobean Feminist Revenge Comedy. And funny it is. 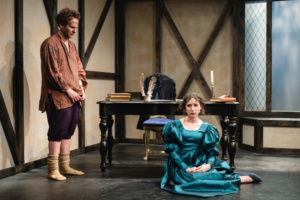 Monahon’s  play is based on a 1589, women pamphlet titled “Jane Anger Her Protection for Women,” no-one  to this day knows who the author was.

Hello! Hi! How now!
Well, here we are. It’s back, baby!
The death carts are out, the plague screecher is running around screeching, the playhouses have closed, fleas are swarming the streets, people are freaking out. It’s a GREAT time to be a Cunning Woman.

Jane Anger played by the brilliant Amelia Workman, speaks to us telling us

History-wise, it is 1606 and the sickness is back. The nobility have escaped to the countryside. They are putting up X’s on the doors. Right away the play becomes relatable. 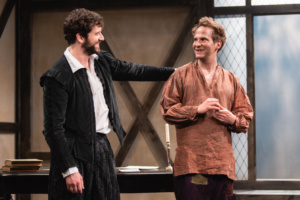 From there we meet William Shakespeare (Michael Urie) and the man who comes to empty his chamber pot Francis (Ryan Spahn). Frances is career-obsessed man posing as a youth, when  in reality he is more like 40. Shakespeare is having a bad case of writers block and has taken to stealing another writers work. 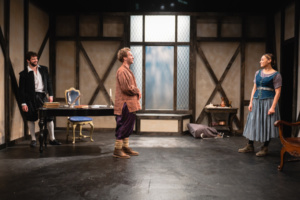 When Jane arrives through the window asking for a favor, sexual tensions ensue. Then his long suffering wife, Anne Hathaway (Monahon), shows up and a comedy of horrors takes over, until the morality of the play finishes the night. 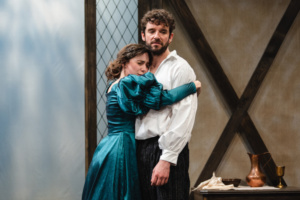 Monahon is a clever writer. In JANE ANGER she pokes fun at Shakespeare, being obsessed over being an actor and theatre itself. The comedy is witty and crisp with takes on the plague, spacing during a plague, “Who’s on First?”, the chastising of women and the misogyny some men possess and all of it brings laughter. 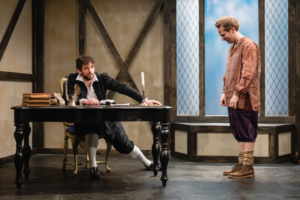 What needs work is the direction by Jess Chayes. Where there is physical comedy between Spahn and Urie, who are in actuality a couple, as soon as Jane enters the sexuality or should I say the physicality should be ramped up.  The middle drags because of this and the fact there is no reveal. For that matter there really is no secret.

Spahn does his best work here. His physicality is riotous. Urie is an actor’s actor. He truly is a gift to theatre with his sudden moods splayed all over his face and body like a regal gift.  Until this play is finished Monahon needs to step back. She is serviceable, but this play has the chance to really say something. It is along the lines of The Inspector General and The Alchemist. Originally the project started as a 2020 digital MCC Lab for Urie and Spahn. Monahon then included Jane and Anne. Though critics have been invited, this is in essence a workshop. A delightful one and worth the price of admission. I think if worked on this could be a major work. 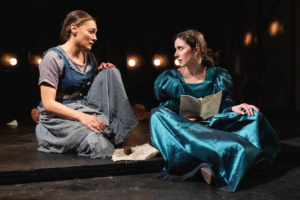 Another reason to see JANE ANGER is Amelia Workman. This is the first time I am seeing this actor’s work, but I will be following her career. She truly makes this play a sensation.

JANE ANGER is a play for now and for the centuries to come.