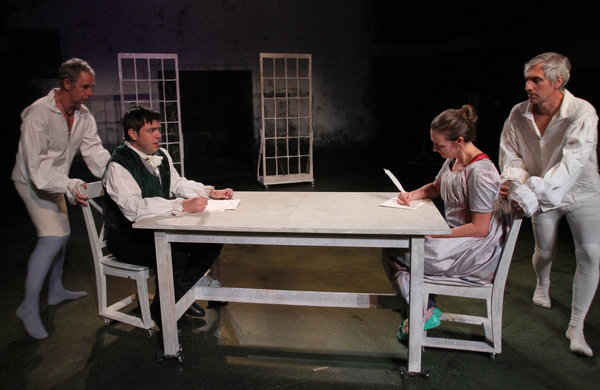 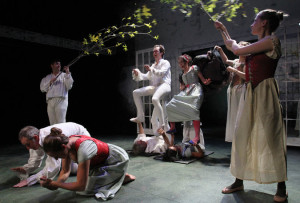 Jane Austin’s Sense & Sensibility by the Bedlam Theater Company is highly energetic, frenetic and creative. Playing to sold out crowds at the Gym at Judson, adapted for the stage by Kate Hamill and directed by Eric Tucker, this is more of a Monty Python version than classical theatre. Taking extreme liberties with the text, the themes of the book stay intact, if not slightly off kilter. Part of this is due to the ensemble of 10 highly skilled actors who take on the assorted 23 major characters. The change is dizzying and sometimes hard to follow. 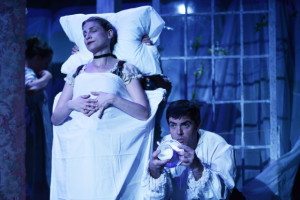 The show starts as the ensemble clad in street clothes, starts to dance as if at a rave. As the clothes morph from this century to early-19th-century, so does the dancing. In small breaks the characters mutter to themselves, each other and us, the gossip of the day. How the generation of today is obsessed with entertainment media and reality TV. This was the past generations format of entertainment. If you listen closely you can hear who is sleeping with whom, be it true or false. Think old style telephone. The game continues through out the show.

As the dancing ends, Mr. Dashwood (John Russell), kicks the bucket leaving his wife (Samantha Steinmetz), and three daughters: The eldest Elinor (Andrus Nichols), the sense of the story; Marianne (Ms. Hamill who also adapted the play), an overly romantic, dramatic passionate girl; and Margaret (Jessica Frey), the youngest. Mr. Dashwood’s son John (John Russell) by a previous marriage inherits everything because women were not allowed. Despite being well off, his selfish, vain wife Fanny (Laura Baranik) kicks the family out to a modest cottage, when Elinor falls for her Fanny’s brother Edward Ferrars (Jason O’Connell, who doubles as his foppish younger brother). Marianne flips for the handsome philander John Willoughby (John Russell) and becomes a scandal. Marianne spurns the dullish Colonel Brandon (Edmund Lewis) who truly loves her. This is a tale of All’s Well That Ends Well as hearts are broken and fate steps in so that true love wins in the end.

The actors are all winning in their craft. The direction by Eric Tucker is a masterpiece of swirling sets by John McDermott which make the while piece seem as if we are on the carousel of life and we are only its players. Weaving in and out are tables, chairs, a divan, French doors, trellises and tree’s, asking us to fall down this rabbit hole. Les Dickert’s perfect mood lighting lets us know the time of day, as well as the passage of time. We see the nightmares in which seems more real, than real life.

Bedlam’s Theatre Co. is a highly inventive company and they have a captive downtown audience. The audience was in stitches as they flock to this camp style version, which use the imagination.