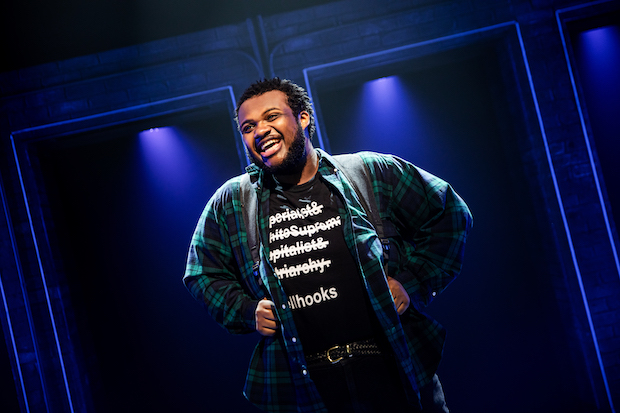 On All That Chat johnny242 posted: Went to the matinee yesterday (5/18/2022) Twenty five minutes into the show at the beginning of a new scene an announcement was made that there will be a brief pause & the show would resume shortly. Twenty minutes later JAQUEL SPIVEY’s understudy KYLE RAMAR FREEMAN came on stage, continued in the role of Usher and was BRILLIANT. Hope that all is well with Jaquel. Greatful to have seen both amazing performers.

On Twitter: Thomas Lee @Artseminator May 18 Who went on for #JaquelSpivey at today’s matinee of @StrangeLoopBway? It was about 15 minutes in and I didn’t catch the understudy’s name when they made an announcement (two are listed in the Playbill). He and the show were fabulous. (Get well soon, Jaquel!)

Maximinalist @Maximinalist 20h Reading on Twitter that Jaquel Spivey had to step out 30 minutes into STRANGE LOOP and really hope he’s doing okay.
On Redditt: Posted by u/Massive_Network3533 2 days ago Jaquel Spivey in “A Strange Loop” It appears Jaquel has been off for a few shows, with Kyle Freeman (who is phenomenal!) stepping in to play Usher. Does anyone know why Jaquel has been out, and when they’re due to return?
khali1920 · 2 days ago I was also curious. We saw Kyle on Saturday night and at first I was so disappointed but he was amazing.
schimmdog43  1 day ago· edited 1 day ago He’s back in as of today’s matinee ( source: I’m there now)

Edit: there was a stoppage and Kyle will be coming in as Usher. I hope Jaquel is doing all right.

Also wondering this! Saw on BroadwayWorld that Jaquel was out Friday/Saturday. I went last night and saw Kyle (who is great!!).

yeswithaz So funny – I went tonight and had no idea there was an understudy (didn’t look at my playbill). Kyle was indeed phenomenal.

Jaquel posted on Instagram he had gotten sick mid-show, now this is gone.

Now this is A Strange Loop!