Jason O’Connell an Actor on the Rise and the Reason To See Happy Birthday, Wanda June

Jason O’Connell an Actor on the Rise and the Reason To See Happy Birthday, Wanda June

One of the best shows we saw this season was early on. Happy Birthday, Wanda June played Off-Broadway at the Gene Frankel Theatre, produced by the Wheelhouse Theatre Company. Written by novelist and short story writer Kurt Vonnegut Jr. in the 70’s, the play is even more relevant today. 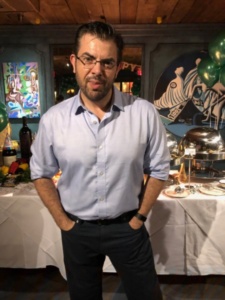 Happy Birthday, Wanda June takes a searing and darkly comedic look at American culture through the brilliantly perverse lens of Kurt Vonnegut. After being presumed dead for eight years, respected war veteran and big game hunter, Harold Ryan, returns home and brings with him an old way of thinking, celebrating a Hemingway-esque machismo and American exceptionalism. Harold soon discovers that the society he returns to has made attempts to progress into a more modern, enlightened cultural narrative. Happy Birthday, Wanda June is a dynamic and often hilarious meditation on toxic masculinity and a capitalistic America’s failed attempts at progress cloaked in honor and morality. Simply put, and as the first few lines of the play state, this is a play about men who enjoy killing, and those who don’t.

One of the reasons to see this show Happy Birthday, Wanda June  Jason O’Connell. O’Connell’s performance is over-the-top, running the gambit from whisper to roar. His accents and alpha-primate physicality make this role fully fleshed out. He is menacing and vulnerable making us care and fear for him all in the same breath. He is the macho male whose intelligent makes him truly frightening.

O’Connell studied theatre before moving to New York, working steadily as an actor ever since. He is known for his work Off-Broadway in Pride & Prejudice, ​Sense & Sensibility and​A Midsummer Night’s Dream. O’Connell spent multiple seasons at Texas Shakespeare Festival (Hamlet, Mercutio) and Nebraska Shakespeare Festival (Richard III, Petruchio), and has appeared numerous times at the Hudson Valley Shakespeare Festival in NY.  Roles there include Benedick, Thersites, Claudius, Berowne, Kent, Parolles, and the lead in David Ives’ The Liar. Jason will return to the festival next summer with his adaptation (with co-writer Brenda Withers) of Cyrano DeBergerac, in which he will play the title role. He also wrote and performs a one-man show about his lifelong obsession with the Batman movies, The Dork Knight, which has enjoyed very successful runs in NYC and beyond..

T2C had a chance to talk to this amazingly talented performer.

Suzanna BowlingMay 17, 2022
Read More
Scroll for more
Tap
Lindsay Mendez Sings Who Knows? From I Can Get It For You Wholesale
Adam Gwon’s Ordinary Days: A Show That Should Not Be Missed