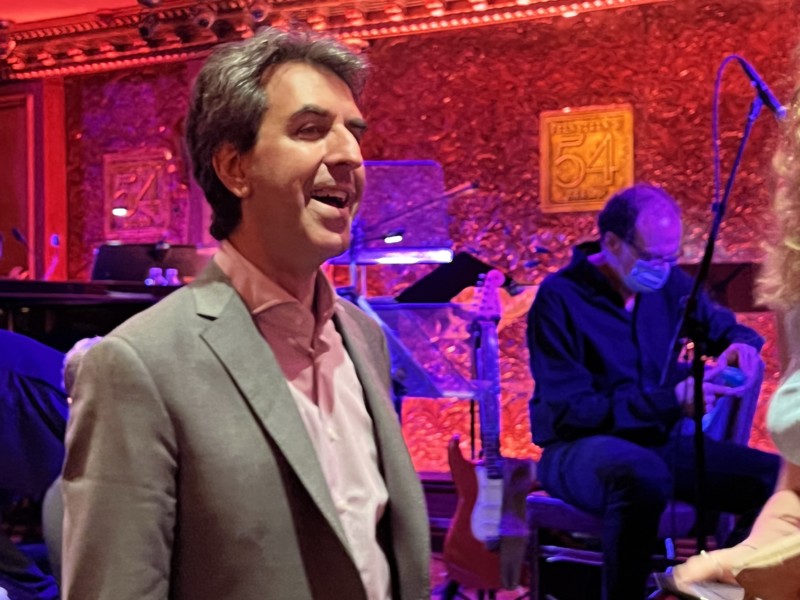 Jason Robert Brown is back to Broadway with Mr. Saturday Night and last night began a spectacular three night new concert at Feinstein’s/54 Below. Brown showed off his musical prowess with a series of musical styles to be cherished.

Brown opened up with the New Orleans sounding “Step It Up” that was made for the audience to dance for joy.

A world premiere of a new song “KPR,” which Brown claimed was more like Sesame Street, but all I could visualize was a whole Disney movie being centered around the sound and the characters in the story line. Brown’s beats have a fabulous musical vocabulary that are oh so danceable. Hislyrics have a spiritual side. If only we can all have Kindness, Patience and Respect!

“It All Fades Away” from Bridges of Madison County  was given a gospel rendition. “Everybody Knows”, on Brown’s album “How We React and How We Recover,” is the perfect love song. Then we got “Boat,” from a new show Brown is writing.  Now I knew of two new shows coming, but Brown has four and we thrillingly got premieres from all of them.

One of the shows I knew about was Farewell My Concubine. From that show we got the amazing Cheeyang Ng performing “You Ji” and if I wanted to see the show before, this made me want to see it even more.

I am breaking up this review into two parts as I took a lot of video and Brown’s music is so delicious it needs time to digest. Ending this section is the inspirational song “Sanctuary,” dealing with issues of separation, isolation, silence, and identity. Brown’s songs help to heal a wounded population. This song has stacked gospel-like harmonies and engaging vocal lines such as “I am searching for sanctuary, will you shelter me?” The song featured Ng, Anastasia Talley and a phenomenal nine-piece orchestra featuring Gary Sieger, guitar, Randy Landau, bass, Jamie Eblen, drums, Lisette Santiago, percussion, Tony Kadleck, trumpet, Alison Shearer, alto sax, Ben Kono, tenor and bari sax, Clint Sharman, trombone and JRB himself at the piano.

More on all this tomorrow.

Jason Robert Brown: Feinstein’s/54 Below. To get tickets go here.