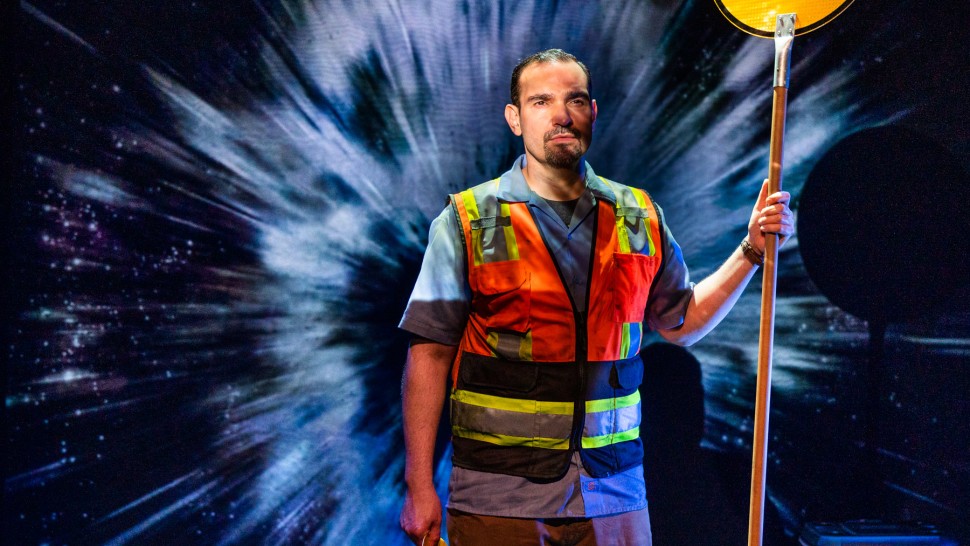 We had Sea Wall/ A Life, which stared Jake Gyllenhaal and Tom Sturridge. Now we have Stephen Lloyd Helper’s A Sign of the Times, with Hamilton’s Javier Muñoz. Running 95 minutes, we are confronted with time, life, death, the origin of the universe, the existence of God, and the loss of a child, yet again and again and again. T.S. Eliot, Albert Einstein, and William Shakespeare are quoted to make this seem more than it is. We are told we are in a metaphysical black hole and really what it feels like is some else’s purgatory.

Muñoz is an ex-physics professor, who has traded his old life to direct traffic with a sign due to his profound loss. His son has died due to Cancer, he is separation from his wife and his best friend is estranged. His loss is so great that he has named his sign Fred, just like Tom Hanks did with the volleyball Wilson. He can really only communicated with inanimate objects and us. This menial job has given him a break from his responsibilities and his life. When he is thrown into the afterlife due to an accident, he is tortured by what he didn’t accomplish. Instead of that being the end, the play rambles on for another half hour and we lose what ever interest we had.

Muñoz is likable and deserves credit for learning all these words. However the subject and being in someone else’s therapy is unappealing.

Kristen Ferguson’s projections are first rate and David Van Tieghem’s sound design breaks up the endless words, but Mr. Helper extended monologue doesn’t manage to connect with his audience. Curiously, he also directed the piece which didn’t help. I was seriously relieved when I left the theatre and was able to feel the cold wind on may face.