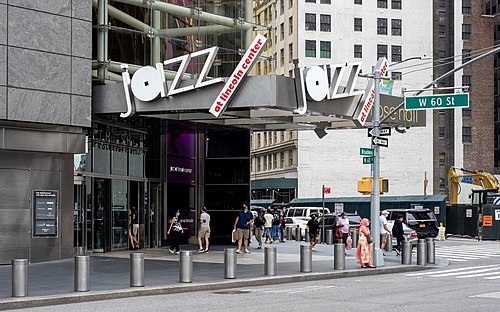 Jazz at Lincoln Center and Managing and Artistic Director Wynton Marsalis proudly announce the organization’s 35th season of concerts featuring JALC’s customary mix of American-premiere commissions and exclusive collaborations by iconic guest artists from across the globe, as well as celebrations of milestones and major figures in jazz and its related genres.

The Jazz at Lincoln Center Orchestra with Wynton Marsalis – an ensemble of 15 virtuosos, composers, arrangers, educators, and unique soloists performing an unprecedented variety of styles that span jazz’s entire documented history – will demonstrate its virtuosic performances throughout the season, on tour across the country, and abroad. The Jazz at Lincoln Center Orchestra with Wynton Marsalis presents several of these cross-cultural investigations. Mideast Meditations showcases new compositions by Marsalis and Naseer Shamma, the eminent Iraqi oud virtuoso-composer-educator. On The Shanghai Suite Marsalis refracts the scales and melodies of Shanghai into songs that sing the dialect of swing. Joined by iconic Cuba-born clarinetist-saxophonist Paquito D’Rivera, the JLCO interprets commissioned pieces by mid-career maestros Elio Villafranca and Edmar Castañeda that explore Afro-Caribbean and Pan-American streams of expression. And, joined by master tenor saxophonist-flutist Lew Tabackin, the JLCO celebrates Japanese-American composer-pianist Toshiko Akiyoshi’s magisterial legacy.

Lodestar Cuban pianist-composer Chucho Valdés celebrates his 81st birthday with a recent masterwork for big band and voices. Brazilian 10-string mandolin wizard Hamilton de Holanda and South African pianist-composer Nduduzo Makhathini commingle their cultural DNA to explore the diaspora of musical language from Africa to the Americas through the slave trade from colonization until the present day. Grammy nominated Carlos Henriquez, bassist of the JLCO, leads a celebration of the respective centennial birthdays of Mambo Kings Tito Puente and Tito Rodriguez with a hand-picked big band.

Jazz at Lincoln Center serves the largest jazz education program network in the world, and its initiatives are based on the organization’s 35-year history of education in jazz performance and appreciation. These programs reach all populations, from infants to seniors, and advance JALC’s belief that jazz education is for all – regardless of experience. The goal of each program is for participants to learn the communal history of jazz in a sociopolitical context, receive guidance on better communication of personal objectives while maintaining balance in a group, and gain awareness of the mission of jazz musicians today – building on the aspirational foundation laid down by earlier generations.

With the lodestar composer, pianist, and orchestra leader Duke Ellington as a foundational guide, Jazz at Lincoln Center continues to produce an extensive range of educational and advocacy programs for all ages. The organization’s signature education program, the Essentially Ellington High School Jazz Band Competition & Festival (EE), takes place May 11-13, 2023. For the 28th year, the program spreads the message of Duke Ellington’s music, leadership, and collective orientation, providing high school ensembles with free transcriptions of original Duke Ellington recordings – accompanied by rehearsal guides, teaching notes, original recordings, professional instruction, and more – to over 7,000 schools and independent bands in 55 countries. Regional festivals return as in-person programs in 20 locations, including five festivals in Australia, as charts and resources continue to be made available to schools worldwide. This year’s music includes the first-ever publication of four works by Afro-Cuban-New York jazz and salsa pioneer Machito from his legendary Kenya album, made available to schools for the first time. For the second year, Jazz at Lincoln Center presents its popular Journey Through Jazz education concerts for adults hosted by the JLCO, presented in The Appel Room and digitally captured for wider distribution. The first concert focuses on what attributes of America’s indigenous art form make it so compatible with other forms of music, empowering anyone who fully engages with it. The second concert, Jazz Chronicles: Old and New, is devoted to the stories that propagate and perpetuate the oral tradition of jazz, linking contemporary practitioners to past masters.

Other highlights of the 2022-23 Education season include:

– For the first time since early 2020, WeBop, an interactive program for families with children ages eight months to five years old, will return as in-person classes beginning in October of 2022. A number of online classes will still be available.

– The family-oriented Jazz for Young People concerts celebrate two important centennials – Who is Charles Mingus? held live and in-person in Rose Theater (October 22, 2022) and Who is Thad Jones? (March 25, 2023).

– Blue Engine Publishing continues with more music from the library of the Jazz at Lincoln Center Orchestra with compositions and arrangements by JLCO members and Wynton Marsalis.

Throughout the summer of 2022, Jazz at Lincoln Center will build upon its successful outdoor concert initiatives from the summer of 2021 and continue to create collaborative concert events through September with organizations throughout New York City and environs beyond, with MoCA Westport, Caramoor, Times Square Alliance, Bryant Park, SummerStage, Lincoln Center, and more.

The Jazz at Lincoln Center Orchestra with Wynton Marsalis, which, Marsalis has observed, “might be the most flexible and all-encompassing ensemble in the history of our music,” tours its vast repertoire – revisiting symphonic works from Marsalis’ distinguished corpus, presenting new cross-cultural commissions, and delving into JALC’s vast book of modern jazz arrangements – extensively throughout the 2022-23 season.

The orchestra will collaborate with various organizations in the United States and abroad to perform Marsalis’ large-scale works and engage in residency activities.

On three separate occasions during the 2022-23 season, JLCO performs Marsalis’ epic jazz-gospel suite All Rise (1999), scored for the 15-piece JLCO, symphonic orchestra, and choir, in which Marsalis unites disparate elements, Stravinsky to gospel, into a cohesive work without a trace of self-consciousness. On September 8, 2022, the JLCO collaborates with the Los Angeles Philharmonic – which first performed what the Los Angeles Timescalled an “inspirational jazz symphony with a mission” on September 15, 2001, four days after the tragic events of 9/11 – at the Hollywood Bowl. The following month, JLCO presents successive All Rise residencies at the University of Michigan (October 10-16, 2022) and at Hancher Auditorium at the University of Iowa (October 18- 22, 2022).

Directly following the University of Iowa residency, the Jazz at Lincoln Center Orchestra with Wynton Marsalis visits Mexico for concerts in Guadalajara, Cervantino, and Mexico City (October 25-29, 2022), before a five-concert tour in Texas (October 30-November 5, 2022).

From January 24-February 10, 2023, the Jazz at Lincoln Center Orchestra with Wynton Marsalis tours the United States with the transformative Iraqi oud virtuoso Naseer Shamma, following their American premiere performances at New York’s Rose Theater. The venues include a residency with Symphony Center Presents in Chicago (January 26-27, 2023) and concerts in Omaha, Nebraska; Milwaukee, Wisconsin; and Madison, Wisconsin.

The Jazz at Lincoln Center Orchestra with Wynton Marsalis completes the 2022-2023 season with a month-long European tour in June, including performances of The Jungle (composed in 2016), Marsalis’ grand evocation of New York City, with the Luxembourg Philharmonie (June 6-9, 2023) and with Orchestre de Paris (June 10-14, 2023) in Paris. From Paris, JLCO will crisscross the continent, with concerts every night through July 9, 2023. Featuring today’s rising jazz stars under the music direction of trumpeter Riley Mulherkar and curated by Jazz at Lincoln Center, JALC Presents “Songs We Love” Tour through IMG, tours 45 cities in early 2023.

The cabaret-oriented Songbook Sundays series continues in September and November. Dizzy’s iconic Tuesday-Saturday evening Late Night Series, featuring some of the most talented emerging artists in jazz, relaunches at the end of September.