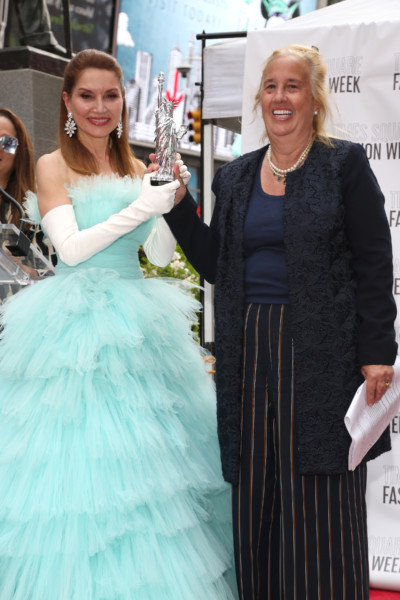 The 3rd Annual Times Square Fashion Week took place at Father Duffy Square in the heart of Times Square. Fashion and Philanthropy Icon Jean Shafiroff who emceed last year’s event, took part in this year’s fabulous event as the Mistress of Ceremonies. Jean was introduced and presented Gale Brewer, President of the Manhattan Borough with the “I Love NY Leadership award.”

Over 1,000 attendees were on hand to see the runway show from designers Cesar Galindo, House of Barretti, Gloria Lee, and Raphelita. The event was a combination of street runway, digital shows on billboards, double decker bus, and a finale cocktail event! There was a live performance featuring award-winning TV host and Broadway performer, Cindy Ashton.

Jean Shafiroff is a philanthropist, humanitarian, TV host, writer, and the author of the book “Successful Philanthropy: How to Make a Life By What You Give”. Jean is often referred to as “the first lady of philanthropy” by the press because of her generosity and extensive work as a volunteer fundraiser and leader in the philanthropic world. She serves on the boards of many charitable organizations and each year chairs upwards of eight different charity galas. Among the many causes she champions are those involved in women’s rights, rights of the underserved, health care, and animal welfare.

Jean serves on the boards of the American Humane, Southampton Hospital Association, NYC Mission Society, French Heritage Society, Couture Council of the Museum at FIT, Global Strays, New York Women’s Foundation, and Southampton Animal Shelter Foundation Honorary Board. A Catholic, she served on the board of the Jewish Board for 28 years and now is one of their honorary trustees.

In addition, Jean is an ambassador for American Humane and is the national spokesperson for the organization’s “Feed the Hungry” Covid-19 program, an initiative designed to provide food for 1,000,000 shelter animals.  Jean is the ambassador of the Southampton Animal Shelter Foundation and a key donor and volunteer fundraiser for their work. She is a New York Women’s Foundation Board Alumna who remains very active with the Foundation and with women’s issues in general.

Jean is the producer and host of the television show “Successful Philanthropy” which airs six times weekly through LTV studios in East Hampton, NY, as well as in New York City on Manhattan Neighborhood Network (MNN): Spectrum Channel 34 and 1995, Verizon/FiOS Channel 33, and RCN Channel 82. The show will open in additional markets in 2021. On her TV program Jean interviews an eclectic mix of leaders in the world of philanthropy as well as actors, artists, business and civic leaders, and even a U.S. presidential candidate.

Genevieve Rafter KeddyMay 16, 2022
Read More
Scroll for more
Tap
Taste of Upper West Side Returns
Thoughts of a Colored Man Partners With The YMCA To Give Free Haircuts To The Bronx and Brooklyn