Jeff Harnar Makes Love To His Audience With Easy To Love: The Words and Music of Cole Porter

Jeff Harnar Makes Love To His Audience With Easy To Love: The Words and Music of Cole Porter 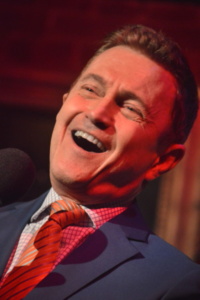 It’s week two  at the new Cabaret Room created by Mark Nadler at The Beach on East 70th Street and Second Avenue, where Jeff Harnar presented his Cole Porter show  “Easy To Love: The Words and Music of Cole Porter”.  This is part of the series Cole and Slaw at the Beach, where different top performers celebrate Porter in their own way. Mark Nadler opened the room and series last week  with “Cole Porter After Dark”. 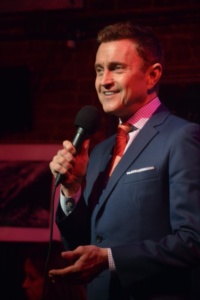 Harnar is an expert on Porter, having performed Porter at The Lyrics and Lyricist Series, various cabaret rooms all around the US, and at Carnegie Hall in The Cole Porter Centennial Gala  in 1991.  He debuted this particular show at the cabaret series at The Russian Tea Room in the early 90’s. 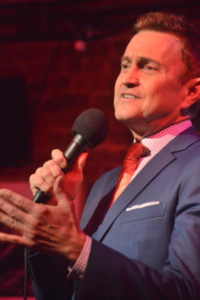 These were all love songs, longing for love, being in love, loving other items. There were no revenge songs. 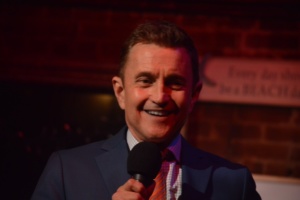 The songs chosen were in the range from 1925 to 1956 and no matter how old or new the songs were, they were all sophisticated and not outdated.

Musical director Christopher Denny opened the show with an overture of “Anything Goes” and “Let’s Do It, Let’s Fall in Love” making way for Jeff’s entrance.

Entering the room singing “I’m Throwing a Ball” Tonight”, he cleverly walked through the room shaking many of the audience’s hands, as if welcoming  them to his party in his living room, which is the essence of what the room is like. He then took the liberty of updating some of the guests names in the song to Lady Gaga, Katy Couric, Kelly Rippa etc.

Jeff told us he was introduced to the songs of Cole Porter as a young kid by his parents would listen to Frank Sinatra. He then got to see the black and white movie of “Born To Dance” and he was hooked. He mesmerized us with “I’ve Got You Under My Skin” from the movie. The song written in 1936 could have easily been written yesterday.

Porter was bi-coastal writing songs for Hollywood as well as Broadway and sometimes almost at the same time.

He went through the laundry list song ‘It’s De-Lovely” with ease, as if he was telling a biograph about love and life.

“A Little Skipper from Heaven Above” was discovered by Jeff when he performed on the Porter show at ‘Lyrics and Lyricists’. Jimmy Durante sang it in the Broadway Show “Red, Hot and Blue” also starring super stars, Bob Hope and Ethel Merman.  He did a perfect imitation of Durante

“In the Still of the Night” and “I Am Love” were sung passionately and slow. You could feel the love, in the way he sang these songs.

A medley of the five songs e performed at the Centennial at Carnegie Hall in 1991 consisted of “You Do Something to Me”, “You’ve Got That Thing” “You’d Be So Nice to Come Home To”, “Let”s Not Talk About Love” and “From This Moment On”. How perfect that these songs blended together.

In all the years of writing songs, it wasn’t until 1956 that Cole Porter received a Gold Record for his song.  It was Bing Crosby’s recording and Crosby’s 21st Gold Record.  The song “True Love” from the motion picture “High Society.” Actually this song was disliked by Porter himself.  Harnar sang this with his heart and made us all feel as if he were singing only to the listener, as passion melted from his eyes.

“Begin the Beguine”, had a waltzy feeling, which had us waltzing along.

Another medley followed, but this time with a partner singing counterpoint and duet.  The partner, his musical director Christopher Denny who brilliantly sang with and to Harnar.  Of all the years I have known Denny, the only singing or vocal moment was a line or a word or two.   This was one of the highlights especially with the song “Cherry Pies Out to Be You” in which they verbally attack each other and then they come together at the end, with “Let’s Be Buddies”.

Porter’s love song to his home “I Happen to Like New York” showed his love to the city. He loved it no matter how gritty it was. “At Long Last Love” showed the accomplishment of reaching it.

“Night and Day” had Jeff coming through the audience singing face to face to the most of the people as if they were his one and love.

Ending the show with “Can Can”,  we all wanted to get up dance but we were dancing in our seats.

We surely didn’t want this show to end.  This was a love affair of Cole Porter and the magic of Jeff Harnar. Jeff not only sings beautifully, he performs the songs with passion. He carefully researches every piece of material.  He makes each person feel that they were the only ones that these love songs were sung to.  He included us all in this party and we were his special invited guest.  Sadly this was only a three performance run and sold out, but I am sure it won’t be the last.

This show was created by Sarah Lazarus and arranged by Alex Rybeck.