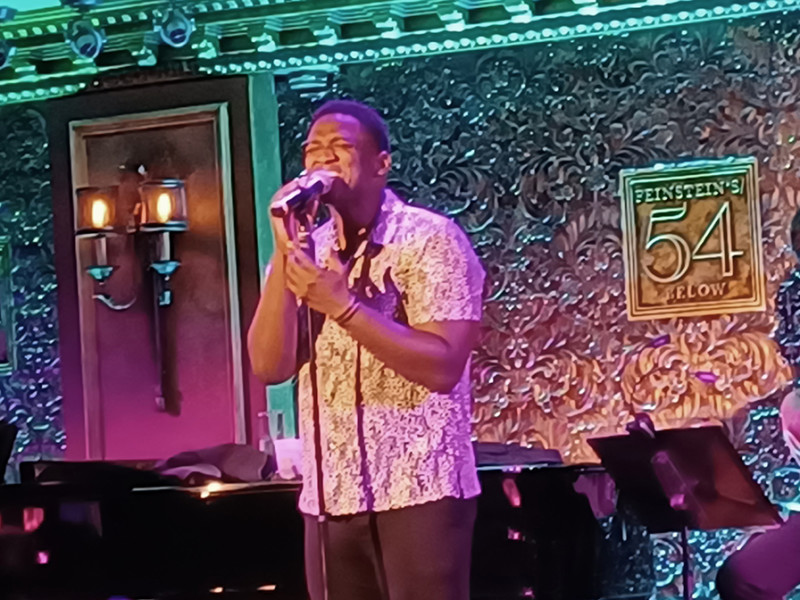 Broadway theater lovers are alternately holding their breath and sighing with relief at the thought of The Great White Way reopening. Meanwhile, smaller venues are getting back on their feet as well. One of my favorites is Feinstein’s/ 54 Below, where Broadway performers regularly get up close and personal with their fans.

It’s hard to believe that it has been over eighteen months since my last visit there. So I was happy to be welcomed back to its warm, beautiful confines last Friday night by the talented Jelani Remy.

Remy will be back on Broadway when the Temptations musical, “Ain’t Too Proud,” reopens on October 16.  Last Friday night, he shared his personal journey, and his passion for performance, with a room full of enthusiastic visitors, friends, and family.

He opened his show with a witty parody of “This is The Moment” from “Jeckyl and Hyde,” in which he joked, “This is my moment….here with me tonight…. most of them white!”  Both his mother and his Carribean cousins were also in attendance, allowing him to make the evening a very personal one.

After explaining how his father tried to steer him into sports, he sang a heartfelt rendition of “I’m Not My Fathers’s Son” from “Kinky Boots”.  Fortunately, his family eventually recognized and supported his passion for theater.

He shared his love of divas, and his enjoyment of transforming into anyone he chooses in the theater, by performing “Roxy” from  “Chicago” as “Jelani.”  He then donned a blonde wig and a New Jersey accent to channel Audrey from “Little Shop of Horrors,” singing the ever hopeful standard, “Somewhere that’s Green.”

Mr. Remy was unabashedly enthusiastic about his love of girl bands.  He shared that admiration  by performing “Say You’ll Be There” as recorded by the Spice Girls, and “Secret Love Song” as recorded by Little Mix. He then segued into “I Wanna Dance With Somebody” to get the room jammin’ again.

He was at his best when he could let loose his soaring falsetto. Sometimes that was slow and lyrical, as when he sang “Bring Him Home” from “Les Miz.”  But then he rocked the house with a version of “Thinking Out Loud” inspired by the Soka music of his native Carribean culture.

He was good at tugging our heartstrings, too, with songs of romantic longing, like “Fifty Percent” from “Ballroom” or personal aspiration in “Proud of Your Boy” from

“Aladdin”, which he sang straight out to his beaming mom.

Remy’s set was pretty loose and casual, befitting an intimate evening which felt like being in his living room. So when he offered to have some volunteer come up from the audience to sing with him, I expected an enthusiastic amateur. Turns out we were set up, as he brought up another talented Broadway performer, Thayne Jasperson, currently in rehearsal to re-open “Hamilton,” to do two very nice medleys with him which they had prepared.  One was the classic mash up of “Get Happy” and “Happy Days are Here Again”.  The other was a far less common mix of “Somewhere Over the Rainbow” and “The  Rainbow Connection.”

He closed the evening with an encore of “Just My Imagination” which had us all singing along.  I’m so glad it’s not just my imagination that Broadway, and Broadway performers like Jelani Remy, are back onstage sharing their talents with us again.

Suzanna BowlingMay 6, 2022
Read More
Scroll for more
Tap
Seasons of Love with Anthony Rapp at Feinstein’s/54 Below
My View: The Hit Maker Has Another Hit Coming Out…Steve Tyrell “Shades of Ray”