Jennifer Holliday Wows at Arts For All Benefit

Jennifer Holliday Wows at Arts For All Benefit 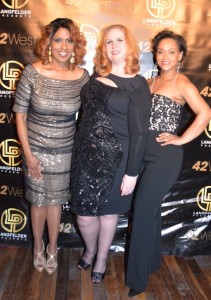 Last night was a night to remember. Jacob Langfelder in partnership with Arts-For-All, Jill Bernard and Rashad Chambers presented a one night only concert featuring Tony and Grammy Award winner and the original Dreamgirl Jennifer Holliday along with the Tony Winning star of the upcoming Roundabout Theatre production of She Loves Me, Laura Benanti, two time Tony Winner for Assassins and Fun Home‘s  Michael Cerveris’ and The Color Purple‘s Rema Webb. Julie James, host of SiriusXM’s Broadway Names with Julie James hosted the perfect night at 42West located at 514 West 42nd Street between 10th and 11th avenues.

Tony Award-winner Laura Benanti who recently joined CBS’s “Supergirl,” showed her comedic side. This is one funny woman. Then she flawlessly sang “Vanilla Ice Cream,” as those resent were the first to hear this thrilling soprano take flight.

Rema Webb who is currently in the Broadway Revival of The Color Purple sang from her show prior. I always knew “Let Them Sing,” from Violet, should be sung by a woman. Then she brought the audience to tears with Oleta Adams “I Just Had To Hear Your Voice.” She recently starred in You’re Standing In My Way: A New Song Cycle by William Finn and Deborah Abramson at Barrington Stage Company as well as A New Brain at Encores! William Finn was in the audience to hear Rema watch and hear “Change,” bring down the house. The casts from The Lion King, The Book of Mormon and The Color Purple all cheered with delight. I have now discovered a talent I need to keep my eyes open for. I am sure the rest of the audience felt the same way. 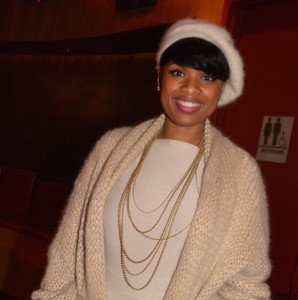 And then there was Jennifer Holliday. She talked about battling MS, depression about how young she was when she started and she was disarming. Then she sang. “Blues in the Night,” “The Look of Love,” “The Song is You” and “At Last” were all flawless. This is a women who sings with all her heart and her soul. She embodies the song’s lyric’s and melds into the music. If that weren’t sang “One Night Only” from the 1981 smash hit, Dreamgirls. Taking a break, she did not disappoint as she embodied her show-stopping, heart-wrenching performance of the torch ballad “And I am Telling You, I’m Not Going.” There was not a cell phone that was not recording and not a dry eye in the house. Jennifer Holliday has the best voice of this century and anyone who was at The Out Hotel at 42West last night knew this was one special evening. What made this even more remarkable is Ms. Holliday was not feeling her best, yet she gave her all so others could have art.

Please if you like this performance donate to Arts For All  to offer accessible artistic opportunities to children in the New York City area who face socio-economic, physical, or emotional barriers to exploring the arts. Arts For All, has professional artists work with youth organizations to build self-confidence, self-expression, teamwork, resilience, and creativity in children.