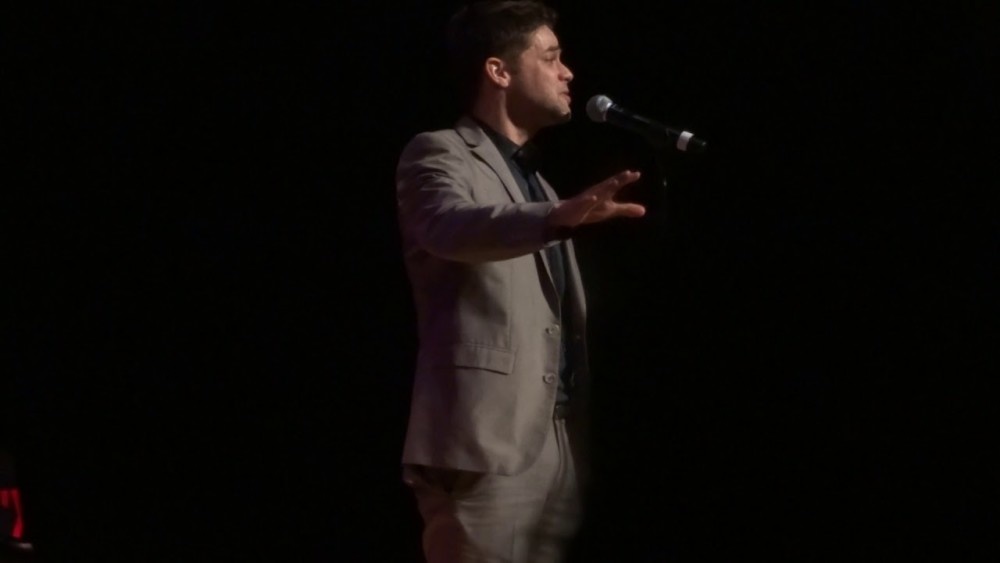 I love sitting in Seth Rudetsky’s living room… or what feels like his living room, when he does his highly personal series of performance and conversation called Broadway @ Town Hall.  On Monday night, producer Mark Cortale gathered about 1500 of their “closest friends” there, to join Mr. Rudetsky in exploring and celebrating the talent of stage and film star, Jeremy Jordan.

Most cabaret style shows are done, by definition, in the smaller rooms around town.  The Town Hall stage was set as intimately as possible, with only a grand piano, a microphone on a stand, and two chairs for them to sit on as they chatted between songs.  That was it.  And that was all that was needed for a thrilling evening.  You don’t need big sets with big talent.

Mr. Rudetsky is a superb pianist, coach, musical director, actor, singer, raconteur, and conduit to all the greatest musical theater performers in NYC.  He is regularly heard as the afternoon host of Sirius XM Satellite Radio’s On Broadway and as the host of Seth Speaks on Sirius/XM Stars. He also wrote and performed in the deliciously funny off Broadway and Broadway musical, Disaster.

Mr. Jordan has grown from fresh faced kid with tons of talent to leading man with a still boyish appearance, balanced with personal maturity, a great sense of humor, a humble soul, and a seemingly boundless talent. He first came to Broadway as a swing for Rock of Ages before being asked to play Tony in the West Side Story revival…well, twice a week, anyway.  He first got national attention as the songwriter, Jimmy, on the TV series, Smash, in a role modeled after songwriter Joe Iconis, whose score for his musical, Be More Chill, has become a viral phenomenon.  He starred opposite Anna Kendrick in the film of Jason Robert Brown’s The Last Five Years.  TV then called him back to play a series regular in Supergirl for three years.  He starred opposite Laura Osnes in the try out of Bonnie and Clyde at Papermill Playhouse. Luckily for him, if not for Bonnie and Clyde, the closing of that show allowed him to star in Newsies, earning Tony, Grammy and Drama Desk nominations.  This season, audiences got to see him in the straight play, An American Son, starring opposite Kerry Washington, which role he repeated for the film adaptation.

So there they were, in the faux living room, just shooting the breeze and singing some casually selected tunes, or so it seemed. Of course, there’s a lot of work to making it all seem so easy. But these two very talented men made it happen magnificently, to everyone’s delight.

Mr. Jordan is a soaring tenor, who pours his heart into every song.  At the same time, he has a laid back, seemingly effortless way of being in the moment, which draws us in like a magnet.

He opened his show with a parody of “Everyone’s Coming Up Roses” with clever lyrics he wrote himself. “I’ll be swell” he said.  And he was.

He traced his humble beginnings in NYC after graduating Ithaca College as a musical theater major in 2007. He wasn’t a singing waiter, but he got his first job in NYC as a waiter by singing for his potential employer, who apparently was a fan.  Success, as he sang next, seemed “So Far Away.”

Rock of Ages got him out of the restaurant to Broadway. That was followed by his stint as a “Two Day Tony” every week in the West Side Storyrevival directed by Arthur Laurents. It was his rendition of “Something’s Coming” that won him the role, and his recreation of that performance at Town Hall was truly exceptional.

Smash brought him to television. He performed Joe Iconis’s song, “Broadway, Here I Come”, which is a dark and brave song about suicide and putting yourself out in the world.

The Last Five Yearsis an audience favorite, chronicling the end of a relationship with the former couple each traveling opposite timelines in song. Mr. Jordan  gave us a spot-on version of “Moving Too Fast” from his performance in the 2014 film version of that show.

Mr. Jordan’s all-in performance as Clyde Barrow, opposite the equally passionate Laura Osnes, should have kept Bonnie and Clyde the musical alive much longer on Broadway that it did. I remember how all over each other they seemed physically during that production. But that’s acting, right? So it was funny to learn that he was a wee bit shy sitting naked in a bathtub for one scene, with Ms. Osnes peering into it at all he had for six long minutes. A device covered in bubble wrap and glitter was created to serve as strategically placed soap suds.

But the most laugh–out-loud moments of the evening were provided when Mr. Rudetsky brought a girl from the audience up onstage to be Mr. Jordan’s Bonnie as he sang her a love ballad.  This young woman was a very mature looking sixteen, whom everyone assumed was older. She spent the whole song blushing, covering her face and turning away from Mr. Jordan, as he pleaded “Look at me!” and ran around the stage trying to get into her sightline. Priceless.

He then nailed the big song, “Santa Fe” from Newsies, showing all those who didn’t realize that he can sound like a genuine New Yorker, even though he really hails from Texas.

At the suggestion of his performer wife, Ashley, he created a medley of two classic ballads, “Smile” and I’ll Be Seeing You,” to close a cabaret show which he thought ended on too much of a down note. Mr. Rudetsky had to wryly point out that both these songs are a bit of a downer as well. But beautiful.

When asked by Mr. Rudetsky what it feels like to be so successful, Mr. Jordan humbly said that he doesn’t feel like a big success; just that he has had big successes.  He still feels himself growing as an artist. I’m sure we all look forward to seeing more of that talent growing here in the future.

Birdland, the Jazz Corner of the World Makes Plans to Reopen With Limited Schedule