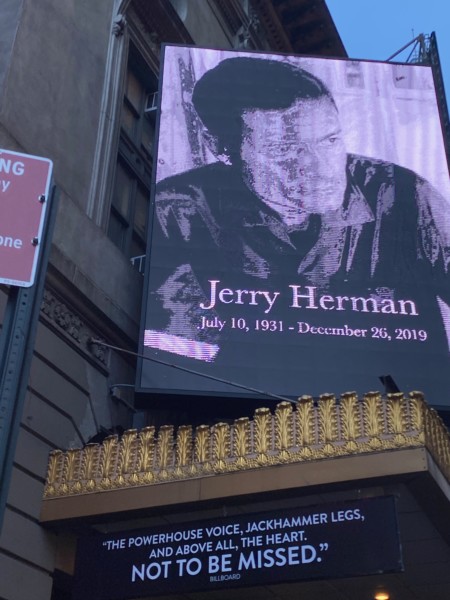 Broadway paid tribute to legendary composer and lyricist Jerry Herman at the Lunt-Fontanne Theatre yesterday. The star studded performances were a once a lifetime remembrance of the man who gave us Milk and Honey, Hello Dolly!, Ben Franklin in Paris, Mame, Dear World, Mack & Mabel, The Grand Tour, A Day in Hollywood/A Night in the Ukraine, La Cage aux Folles and Jerry’s Girls.

Milk and Honey was Herman’s first show and nothing was sung from that. Hello, Dolly! his 1964 musical won 10 Tony Awards, including Best Musical. The show album Hello, Dolly! An Original Cast Recording was inducted into the Grammy Hall of Fame in 2002. The album reached number one on the Billboard album chart on June 6, 1964, and was replaced the next week by Louis Armstrong’s album Hello, Dolly!

Starting off this tribute Jeremy Jordan sang a lovely and moving rendition of “It Only Takes a Moment” that was heartbreakingly beautiful.

On Tour with Ms. Carmello, as Horce Vandergeller is John Bolton who treated us to “It Takes a Woman”.

A 29-piece orchestra along with Kelli O’ Hara had “Before The Parade Passes By” sounding better than ever.

Follow us tomorrow as we bring you the songs from Mame, sung by Marilyn Maye, Jeremy Jordan, Lorna Luft and Kristin Chenoweth as our coverage of Jerry Herman A Memorial Celebration continues.