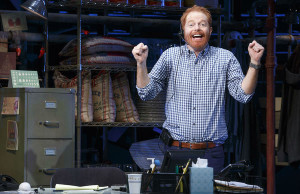 Becky Mode’s Fully Committed, is getting a first class revival at the Lyceum Theater, with Jesse Tyler Ferguson as it’s leading player. Fully Committed first debuted in 1999, with Mark Setlock (who helped create the characters, which he drew from his own experiences), but the script has been updated to seem more current for the Broadway revival. Now the restaurant is so pretentious it serves herb-crusted grouper speckled with fresh hyssop oil on a bed of wild ramps, peppermint snow or  crispy deer lichen atop a slowly deflating scent-filled pillow, dusted with edible dirt.

Ferguson shows off his acting chops playing over 40 characters and holding down the fort for ninety minutes. He plays Sam Callahan, a lowly reservationist at the hottest restaurant in town, that is so over booked or “fully committed,” that the only reservations you can get are on the sixth day of every month the third month out at 9am., which is opened up for reservations. With energy that rivals the energizer bunny, Ferguson leaps into Gwyneth Paltrow’s needy and demanding assistant Bryce, whose demands include a table for 15 on Saturday, no “female wait staff,” no legumes, Bunny Vandevere, a socialite whose husband “may have invented Botox,” demanding socialite Carolann Rosenstein-Fishburn, who wants what she wants…NOW!, a  narcissistic chef, a power-drunk maitre d’, British celebrity chef Heston Blumenthal, a man who makes Sam’s day, his lying co-worker, a mobster who wants “The Lady Is a Tramp” sung at his table and his dad who wants him home for the holiday’s. Sam is of course an actor who is waiting for his big break as his acting chum does a number on his head, his cell phone has to be manipulated to get a signal and food is a scarcity in the basement where he is trapped.

Jesse Tyler Ferguson, is the star of ABC’s “Modern Family,” started off in Broadway musicals. I’ve never been a huge fan but in the piece his sense of humor and comic timing is dead on. Ferguson’s flexibility of character is an accomplishment.

Derek McLane’s set is a knock off of The Color Purple. What is it with all these chairs piled sky high?

Fully Committed does not seem at home in the Lyceum Theatre as it really is a more intimate show.

If you like comedy served at you at rapid pace, you will love this tour de force performance by this capable actor and this serviceable play.