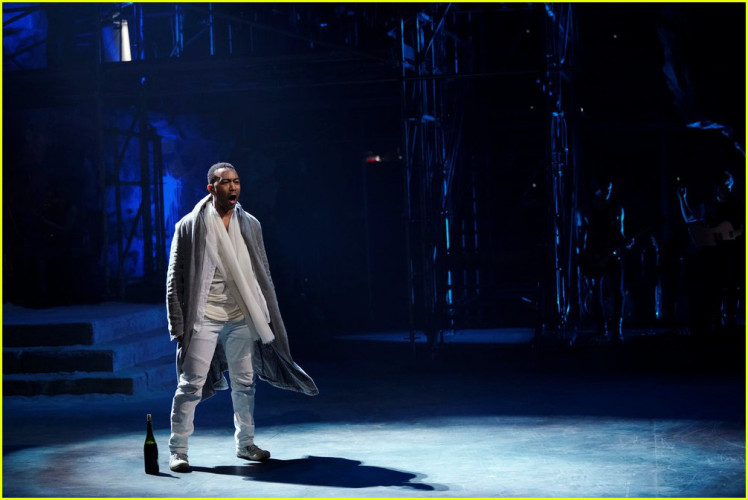 Ross
I’m always hesitant when I see an exclamation point after pretty much any title of any show.  It’s like they are daring me not to be excited by it, especially after the word, ‘Live‘. But regardless of that punctuation mark, I was truly eager to see Andrew Lloyd Webber and Tim Rice’s iconic stage musical, Jesus Christ Superstar, Live in Concert on NBC last  Easter Sunday (as us Canadian’s call it, as we also celebrate Easter Monday…I’m not sure why). I can remember listening to that 1970 concert album endlessly back in my childhood home of London, Ontario, hypnotized and dreamily fascinated by the soaring vocals and heighten dramatic flair of this tale.  It was not a story I knew well. Truth be told, all my religious upbringing and teaching surrounding the story of Jesus and his crucifixion was basically incapsulated within that record sleeve (for those of you who remember records and the sleeves they come protected in). The story that this particular musical told was really my only teaching guide. All I know about this story is due to Andrew Lloyd Webber and Tim Rice; not the greatest teachers (nor the worst) but they were the only ones I had at my disposal.

I must also admit that from my obsessive listening in my youth, I know every word to every song, and can sing along quite precisely from beginning to end (and I so wanted to. Luckily I recorded it, so I will do just that when not surrounded by my friends, cause really, no one wants to hear my singing, especially with those stellar voices doing great work on television).  The production returned the iconic musical back to its organic roots. The musical started out as a concept album, and was then adjusted onto the stage and a magnificent movie directed by Norman Jewison in 1973 starring Ted Neeley, Carl Anderson and Yvonne Elliman. The film was staged and shot in Isreal, but balanced a 1970 esthetic with the classical story line. Jason Ardizzone-West, the production designer for this television special knew that he needed to return the focus to that same blend but with a modern-esque semi-staged rendering that was somewhere between an Encores! production and a star-studded concert. Director David Leveaux (Public’s Plenty), with an assist by television director Alex Rudzinski played to the musical’s strengths by heightening the theatricality of the telling and deepening the spectacle.

The overall effect was magnificent, creating an atmosphere that utilized the live audience remarkably well, as this tale is about celebrity in a way, while showcasing some amazing singing performances and engaging and stunning group dynamics and structure. Although I think the directing team failed at bringing together the emotional inter-relational dynamics between the characters, leaving a few of these singers, John Legend most noticeably, to fend for themselves regarding emotional intent, engagement, and physicality, the overall effect, especially in regards to the brilliant choreography of Camille A. Brown, worked in the big picture.  Her choreography encapsulated each style and moment with a strength and a fierceness that jumped out of the television screen and into the imagination of all viewers. And the moments, especially that final fading image, went far beyond the expected, transporting us into a heavenly moment of adoration for the orchestration of the production.

John Legend did a marvelous job giving us a real, angry, thoughtful Jesus singing beautifully from moment to moment, but he is not an actor, and his body never seemed to be fully engaged with anyone around him, doing the desired work with simplistic and typical body motions, but not connecting in any real or authentic way beyond his emotional voice. Sara Bareilles (Waitress) seemed desperate to bring him into her loving arms, singing her few songs with such aching beauty that it was hard to imagine not being effected.  Her rendition of “Could We Start Again, Please?” and the iconic “I Don’t Know How To Love Him” was casting at its best. Bareilles is perfect for the part of Mary Magdelene, warm and engaging, and then rising majestically above and beyond any other rendition that one could remember.
Other wonderful moments belongs to these magnificent singers and actors: the incomparable gorgeously voiced Norm Lewis (Porgy and Bess) as Caiphas and Jin Ha (If/Then) as Annas giving us evil and power effortlessly (click here for a wee bit of their wonderfulness).  Rocking out wonderfully, although the microphone/sound volumn levels were no one’s friend on this broadcast, especially at the beginning, Erik Gronwall (“Swedish Idol” winner, 2009) inhabited Simon Zealotes with the exact fortitude and style that this production most inventively needed to succeed. Ben Daniels (Broadway’s 2008 Les Liaisons Dangereuses) as Pontius Pilate, along with Legend in moments, seemed to get overwhelmed closer to the end by the demands of the soaring musicality, screaming and screeching out the last few dramatic moments with a worn out harsh sound that was sadly not what was needed.  Rice and Webber’s rock opera requires singers who can rise to these moments, and although the piece in general flew above expectations, these moments were the few that fell with a bit of a thud.
The true star of this production, beyond the surprisingly wonderfulness of Alice Cooper singing “King Herod’s Song“, was former Hamilton lead/Broadway star, Brandon Victor Dixon portrayal of Judas.  Besides the fact that the part is really the emotional tormented center of the show, rising and falling throughout, the performance by Dixon (Shuffle Along…) flew high above the temple utilizing the strength of his voice to bringing the fear and betrayal to the heart of the matter. He dove into the wild and traitorous journey with an urgency that encapsulated all that this story requires. His suicidal moment felt a bit disappointing in its power and direction, although it certainly didn’t lack the emotional pain it created. In the end, though, it was really the grand finale, that most wonderful title song, “Jesus Christ Superstar” that rocked this broadcast into another dimension.  Sexy and exciting in the glittery creation by theater designer Paul Tazewell, Dixon delivered the most shining moment in this tale, almost making it impossible for Legend to give the final punch to the stomach during his final scripted moments. He was saved though, as the walls separated into a glorious light-filled cross made out of thin air, floating away most beautifully (good job: lighting design by Al Gurdon) during “The Crucifixion“, the most fitting and powerful ending of the story and the broadcast. My memories of the iconic film have been replaced, and for that, I am truly thankful.

Suzanna BowlingJanuary 19, 2023
Read More
Scroll for more
Tap
Learn About Design With Clint Ramos
Noises Off An Old Chestnut at the Walnut