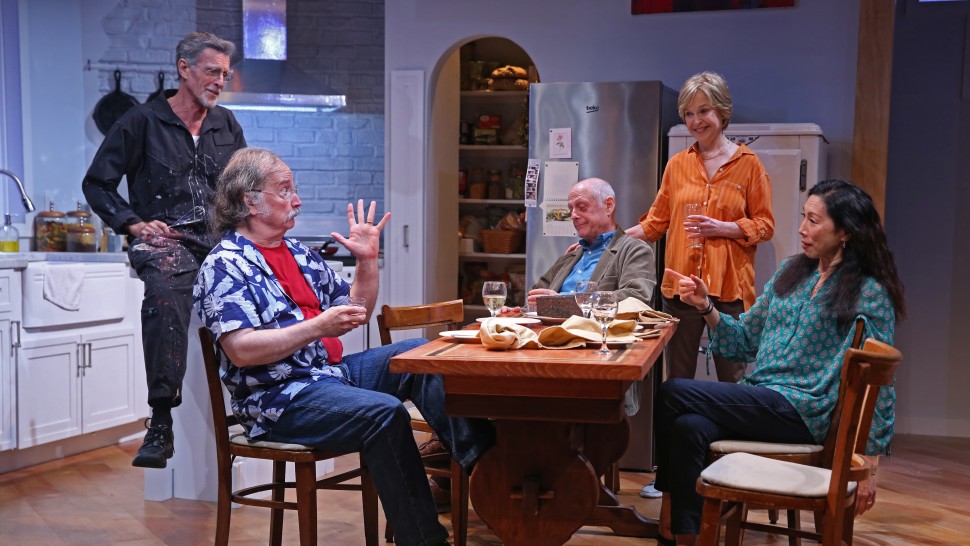 Michael Tucker’s new play Fern Hill, has some wonderful veteran actors. Jill Eikenberry, Mark Linn-Baker and John Glover who lead this wonderful ensemble cast, who play three couples, six friends who are making plans to move in together, in order to deal with their old age.

Fern Hill, is a farmhouse belonging to Sunny (Eikenberry, Tucker’s L.A. Law co-star and spouse) and Jer (Mark Blum). They are celebrating their husband’s birthdays. Vincent (Glover), is 80, Jer, 70 and Billy (Linn-Baker), who is 60. Vincent and Billy’s wives are younger. It turns out that Sunny and Jer’s perfect marriage is not so perfect, which throws the friends off kilter. Billy, a rock musician, loves to cook. He is married to Michiko (Jodi Long), who he rarely sees, since he still lives his life on the road.

Vincent, is a celebrated painter married to Darla (Ellen Parker), who is half his age and has just captured her first photography solo show.

“The Commune Project”, as Sunny and Billy dub it appeals to all the friends except Sunny’s husband. The idea is to all live together in the farmhouse and face the health issues together. “When we need it, we pitch in and hire a caretaker to, you know, deal with the bedpans”. Jer, insists, “It will be the end of privacy as we know it.”

When an affair is revealed Sunny is ready to move on, but now Jer wants back in. An impromptu group therapy has the friends dishing on their own marriages in order to save Sunny and Jer’s.

The cast’s performances seem full of camaraderie, with Glover walking away with the play in a stellar performance.

Nadia Tass keeps the show at a clip and Jessica Parks’s farm set kitchen makes you want to join in the festivities.

There is nothing revolutionary here. Tucker does write terrific comic dialogue, even if the show does feel like a sitcom. Act 1 feels predictable, but Act 11 adds some meat into the mix, with some insight and thought.

After all the cooking, I was ready for a satisfying lunch out.