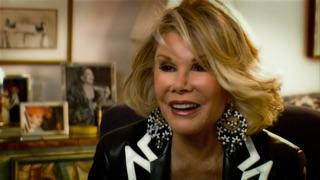 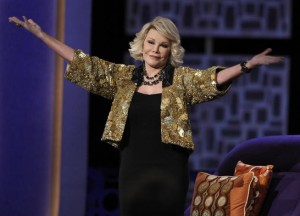 Exit Laughing is the first in a planned series of documentary films about the grandmasters of comedy (and the future inductees of the Comedy Hall of Fame) as an initiative to bring arts programming for comedy to public television.

Joan Rivers embodied New York; brassy, forward, honest, smart and very funny.  She defined the culture as she wrote the history of comedy.  Unlike female standups before her, Joan talked about issues, not wishes.  She was critical to breaking the glass ceiling of then male-dominated standup comedy.  In the process she revolutionized the field as a pioneer to forge a path for the wave of female standups in the 1970’s and 1980’s and beyond. Joan was essential to the evolution of comedy from entertainment to social commentary in the latter half of the 20th century.  As an act of both history and education, the Comedy Hall of Fame has created a documentary to understand and examine how comedy grows from one generation to the next, while celebrating Joan’s impact, innovation and influence. This historical program covers her journey, process, insights into the field and her impact on other comedians.

CHF continues to grow the Archives and will produce more films in an effort to continue the oral traditions that form the foundations of the art form. “Comedy exists today because it was built on the shoulders of past generations of comedians who have pioneered the vast language of comedy and grown its power as an engine for social change,” said Jeffrey Pancer, the curator of the CHF’s archives. “As such, Joan Rivers’ legacy and impact has been defined by other comedians: the artists that she knew and those she influenced, offering a unique perspective from the comedians that create the history of the field.”

Founded in 2004 with the mission to preserve legacies, educate the public about comedy’s power to communicate and celebrate the grandmasters of comedy through live and filmed programs like Joan Rivers: Exit Laughing, the Comedy Hall of Fame functions through digital and film archives, symposia, educational initiatives, programming, performance and annual inductions, rather than a brick-and-mortar edifice with a collection of props and artifacts. In 2006 the Hall began The Comedy Hall of Fame Archives with an interview of Art Buchwald. Since then, the Archives have grown into the world’s most comprehensive oral history of comedy. In 2007 the Hall established the Comedy Hall of Fame Foundation as their charitable arm, dedicated to funding and implementing educational initiatives in the classroom. Since then, the Laugh It Out Program has reached thousands of NYC middle & high school students, using the power of comedy to engage students in the classroom.