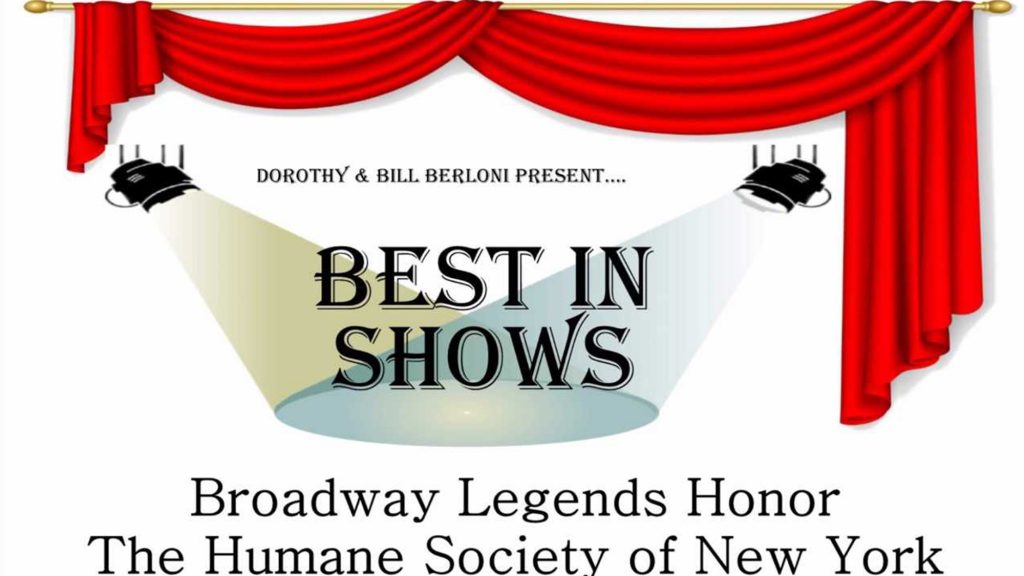 Joanna Gleason, Andrea McArdle, Brad Oscar, Laura Osnes and Karen Ziemba will star in the 2017 Best in Shows, a star-studded cabaret evening benefitting the Humane Society of New York, on Sunday, October 22, 2017 at 7 pm at Feinstein’s/ 54 Below.

James L. Nederlander, President of the Nederlander Organization, will be awarded the Humane Society of New York’s Sandy Fund Award in recognition of his deep concern and support of the needs of rescued animals.  Best in Shows, presented by Dorothy and Bill Berloni, will have music direction by Seth Rudetsky, who will also host.

Mr. Nederlander has a special connection to The Sandy Fund, which is named in honor of the original canine star of Broadway’s Annie.  It was his father, James M. Nederlander, who produced the legendary musical, and so gave Sandy his very first acting job. Sandy quickly became a Broadway star, playing 2,363 performances of Annie on Broadway, and performed for two American Presidents at the White House.  The Sandy Fund Award will be presented by Andrea McArdle, who created the role of Annie.

James L Nederlander (Jimmy) is the President of The Nederlander Organization. He is the third generation of a family known for owning and operating theatres around the world, as well as theatrical productions, cultural presentations and popular music attractions.  Among Mr. Nederlander’s recent producing credits are On Your Feet! The Gloria and Emilio Estefan Story; Hello Dolly starring Bette Midler, The Humans, Kinky Books, The Elephant Man starring Bradley Cooper, School of Rock, A Doll’s House, Part 2, Cats, and War Paint. He is the recipient of several Tony® and Drama Desk Awards for Best Play or Musical, including a special Tony® Award for La Tragedie de Carmen in 1984.

Jimmy is also a committed leader and philanthropist who sits on the Board of Trustees of many leading organizations such as the New York Philharmonic, Actors Fund of America, The Broadway League, The Fisher Center for Alzheimer’s Research Foundation, The Intrepid Sea Air Space Museum, NYC & Company and New York Restoration Project.

Seth Rudetsky spent many years on Broadway as a pianist and conductor as well as two years as a comedy writer on “The Rosie O’Donnell Show” (three Emmy nominations).  He is the afternoon deejay on the SiriusXM Broadway channel as well as the host of “Seth Speaks” on SiriusXM’s Entertainment Weekly Channel. He’s performed his show, Deconstructing Broadway in London, Boston (Irne award) and L.A. (with Barbra Streisand in the audience!), and co-wrote and co-starred in Disaster! on Broadway. He’s written Seth’s Broadway Diary Volume 1 and 2, with number 3 on the way and has also authored two young adult novels; “My Awesome/Awful Popularity Plan” and “The Rise and Fall of A Theater Geek.” He has a rescue kitty from City Vet and two rescue doggies from Animal Care Center. He and his husband produced the “What the World Needs Now Is Love” recording with Broadway Records featuring Idina Menzel, Audra MacDonald, Gloria Estefan and so many more to help the victims and families of the Orlando shooting. On Inauguration Day they started Concert For America, which benefits five civil/human/environmental charities and has featured Barry Manilow, Vanessa Williams, Andy Cohen, Alan Cumming and many more. Seth’s deconstructing videos can be found on www.http://sethrudetsky.com

The Tony-honored animal trainer Bill Berloni’s rescued animals have starred in many of Broadway, television and Hollywood’s biggest shows and movies, starting with the original Sandy in Annie in 1977, to the newest Toto on NBC’s “The Wiz Live.” Bill is the recipient of a special 2017 Drama League Award for “Unique Contribution to the Theatre.” Bill and Dorothy Berloni met over twenty years ago and have been rescuing and training animals ever since. Their new musical Because Of Winn Dixie had its most recent run at the Alabama Shakespeare Festival in January 2017, where it was called “A Triumph” by USA Today.  It is the first theater piece to showcase the human/animal bond using a real rescue dog as the star.  The Berloni animals (who are all rescued), their family and the Humane Society of New York have been showcased in the reality series “From Wags to Riches with Bill Berloni” on the Discovery Family Channel. Bill and Dorothy focus their efforts on helping the Humane Society of New York, where Bill is Director of Animal Behavior and Training. Once again, they are bringing their two worlds together – the Humane Society of New York and Broadway – to help raise money for animals in need and recognize people who champion animal welfare.

Best in Shows will be held on Sunday, October 22 at Feinstein’s/54 Below, 254 West 54th Street (between B’way and 8th Ave).  Doors open at 6 pm; the show begins at 7 pm.  All tickets include an open bar and hors d’oeuvres.  Tickets will go on sale on Tuesday, September 5. For further information, visit http://www.humanesocietyny.org.

Aisle Say on the Square: Getting Through the Pain
Katie Thompson and Joe Iconis Part of Playwrights Horizons, Musical Theatre Factory