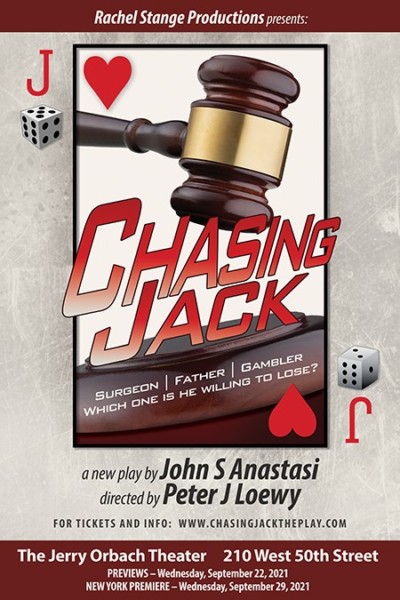 John S. Anastasi’s Chasing Jack had a delightful short run in 2017 and was invited to join the 131 productions participating in the 2019 New York Summerfest it was honored with both The Best of Festival Award and The Best Play Award.

The play was then added to the 2020 schedule of Florida’s Willow Theatre when it was abruptly shut down, along with every other theatrical production in Boca Raton, on the afternoon of its Opening Night (Thursday, March 12) due to COVID-19.

Directed by Peter J. Loewy and featuring Emanuele Secci as Dr. Jack Chase, the play is not so much a courtroom drama as it is a courtroom bombshell.

Chasing Jack is a high-stakes, tightrope-walking, rollercoaster of a play. Of the 47 shows opening in New York in the next three months?  This is the one to see. Guaranteed, it will move you to the edge of your seat and leave you there until the curtain.  It’s the story of the suave Dr. Jack Chase.  A world-famous-Harvard-educated heart surgeon whose very serious gambling addiction has landed him in a very serious Manhattan courtroom where the blue-collar family of Michael James claims that he is directly responsible for the death of their Michael. This is Jack Chase’s last-chance malpractice lawsuit. He needs to win this case. Every segment of his life depends on the win. The audience watches his nail-biting trial in real time. VERY. REAL. HOLD YOUR BREATH. TIME. Addiction is ruthless.  But it makes for riveting theatre. And isn’t that why we’ve all come back to the Broadway neighborhood?

John S. Anastasi works written for the stage include: In My Father’s Eyes, a play with music, produced at the Forum Theater (New Jersey) and the historic Mishler Theater (Altoona, PA.). Music by David Friedman. It was selected as an alternate at the New York Fringe Festival summer 2003. Stolen Lives, a two-character drama, presented at the Acorn Theater at Theatre Row after being presented at the Mishler Theatre. Pied a Terre enjoyed a successful off-Broadway premier at the Kirk Theater at Theatre Row in 2007.  Since being published by Samuel French in 2008, Pied a Terre has been produced at the Cork Theatre in Ireland and has been fully translated to Chinese and produced at the Shanghai Grand Theatre in China as well as multiple cities in China. I Forgive You, Ronald Regan was produced Off-Broadway at the Beckett Theatre in Manhattan in Summer 2013 and published by Dramatic Publishing of Chicago. Transition was presented at the Dorothy Strelsin Theatre and the 5th Wall Theatre/Richmond Triangle Players in Richmond, Virginia.

The Off-Broadway Premiere will be on Wednesday, September 29th at 7:30pm.

Chasing Jack will begin Preview Performances Off-Broadway on Wednesday, September 22nd at the Jerry Orbach Theatre (210 West 50th Street) in Times Square on the corner of Broadway and 50th Street on Wednesdays at  7:30pm, Saturdays and Sundays at 5:00pm $39.50 –  $49.50