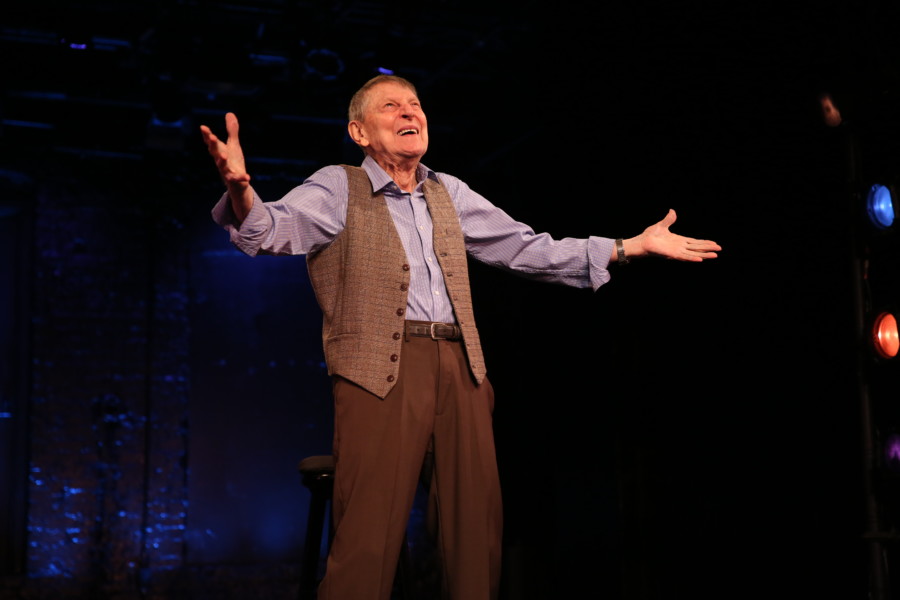 I became a fan of John Cullum when I saw him in Shenandoah and then the film 1776 singing “Molasses To Rum To Slaves.”

Starting off with “On A Clear Day,” you can hear hints as to what a great voice this man possessed. He tells his story like a bard, recalling his audition song “On The Street Where You Live.” His last name was often mispronounced. He came to New York full of ambition and his drive paid off. His audition for Shakespeare is hysterical, animated and a rollercoaster of emotions.

We learn about his father and in the midst of the beginning his career his mother is killed in a car accident. She was his most loyal and constant supporter and it broke his heart. Her accident affected him until now. In a sense this is Cullum’s recovery.

“I Wonder What The King Is Doing Tonight,” from Camelot was the next musical entrée. Though Cullum had one of the best musical theatre voices, like Len Cariou that time has passed.

Cullum was cast in three Joe Papp’s Shakespeare in the Park in rep and with no notice had to go on in a role he hardly knew. His acting is superb.

His first musical audition he came snookered. Singing “There But For You Go I” from Brigadoon for Alan J Lerner, Fredrick Lowe and Moss Hart. He got called back and then cast in Camelot as Sir Dinadan understudying Richard Burton and Roddy McDowell. Cullum sang the title song like Burton and it works. He became lifelong friends with Burton.

Next was We Take the Town with Robert Preston and we are treated to a song from the show.

Having to audition for On A Clear Day for a year after being told the role was his, they cast others, so he took the film “Hawaii,” then he got a call to go to Boston. He replaced Louie Jordan. He had 5 days to learn the show. He rehearsed a total of one day with the cast. 15 minutes after opening night there was no contract and Jordan was not informed. Singing “Come Back To Me” with gesturers and more talk, Cullum’s singing is pleasurable.

Singing “I’ve Heard All Before,” “Father’s Going To Make It Alright,” and “The Picker’s Are Coming” we are lead into Shenandoah. “Meditation” was also offered. Back in the day Cullum’s performance won him Best Actor in a Musical.

Next up was On The Twentieth Century and Madeline Kahn. This role also won Cullum another Tony. Madeline took the score down and Cy Feuer never forgave her. Cullum missed her singing and gave us “I Rise Again.”

Speaking a very little about “Northern Exposure” he tells how he was offered Urinetown, which he hated. His wife’s pet name for him is Agnes and as he reads “Don’t Be The Bunny” to her, he sees the humor. He was nominated for another Tony for that role, thanks to John Rando.

The Scottsboro Boys was one of his last Broadway shows. He tells how he has worked in the theatre for 60 years to an almost perfect life.

Cullum finishes the piece singing Camelot. Though Cullum’s voice is failing, he is charming and his stories, enchanting. This is a must for every theatre performer.

Lonny Price and Matt Cowart direct the show with a personal style and it is highly likable. Julie McBride is a wonderful accompanist. He also thanks his wife and the audience. Cullum is a class act.

You can catch John Cullum An Accidental Star until April 22nd.

Suzanna BowlingJanuary 22, 2023
Read More
Scroll for more
Tap
What to Watch in The New Year: April 13
Listen and Stream The Sound Inside from TheaterWorks Hartford