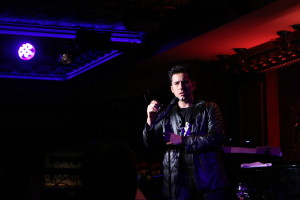 John Lloyd Young was in the house Wednesday night at Feinsteins/54 Below and the women in the audience were swooning over him.  A spotlight hit the entrance to the room as John Lloyd Young appeared in a leather jacket, wearing shades. As he made his way through the audience to the stage singing Hoagy  Carmichael’s Stardust you could feel his sexual chemistry. Young, is best known for winning the Tony, for his role as Frankie Valli in the mega Broadway hit Jersey Boys  He went on to recreate the Frankie Valli role in Warner Brother’s film adaptation, directed by Clint Eastwood.  President Barack  Obama appointed Young to the President’s Committee on the Arts and Humanities. 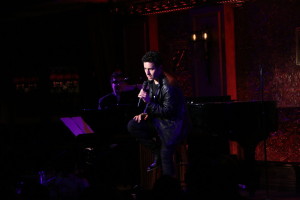 Young is captivating to watch. He puts his heart and sole in each song. On several of the numbers he is backed up on vocals by his  talented musical director Thomas Fragher.  The video demonstrates Young impressive talents.
John Lloyd Young will be at Feinstein’s /54 Below from July 5-9, 2016
Feinstein’s/54 Below
254 West 54th St
Cellar
Related ItemsFeinstein’s/54 BelowFrankie ValliJersey BoysJohn Lloyd YoungMagda KatzNewPresident Barack Obama
Cabaret