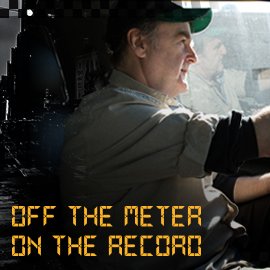 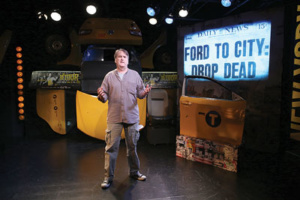 Downstairs at the Irish Rep’s W. Scott McLucas Studio Theatre, John McDonagh’s one-man play Off the Meter and On the Record, will have you laughing at his 35 year plight behind the wheel of a NYC yellow taxi cab. McDonagh’s hysterical escapades lead him into auditions for a reality show, a stint with Steven Fry and local mobsters and billboards for the IRA. 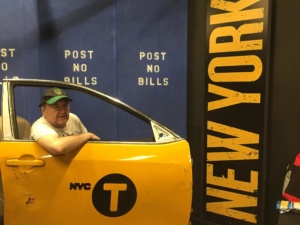 McDonagh is a likable fellow, with a welcoming presence. He is currently the producer and host of Radio Free Eireann and Talk Mac, We and Thee with Malachy McCourt and Corey Kilgannon, on Pacifica station WBAI, so he has the gift of gab. John began his career driving a taxi after serving in the U.S. Army in Germany during the Vietnam War. He met his wife working for an Irish newspaper. During his well put together show, McDonagh illustrates how the city, the people and taxi’s have changed in the past four decades that he’s been driving in the five boroughs. After all now Via, Lyft and Uber dominate the pay for ride consumers and taxi’s are no longer the only game in town. From customers who won’t pay, to the police who throw the homeless into his back seats, McDonagh still manages to organize the “Cabbies Against Bush” campaign during the 2004 republican convention. John was even featured in the BBC program Steven Fry in America, when he took him to meet the mob.

We forget about what it was like back in the old days when you were robbed, had guns or knives put to your head or throat. There were no cell phones to call for help. Shifts were 12-hours with no heat or air conditioning. As McDonagh puts it “you’d get back to the garage and you’d be rubbing the pollution off your face and arms.” From stories about drug dealers, to women in labor and the countless drunks who don’t even know where they live, McDonagh delights in his tales.

The show is well paced by director Ciarán O’Reilly. I adored the taxi part set salvaged from Long Island City adorned by Charlie Corcoran (The Emperor Jones), with subtle lighting by Michael O’Conner. The projection design by Chris Kate and sound design by M. Florian Stabb, really let us see and hear NYC through out time.

Off the Meter and On the Record and John McDonagh are a pleasant way to remember the past, while laughing away the future.