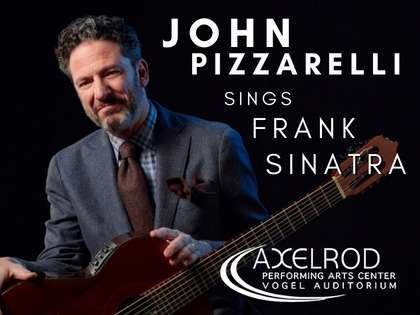 World-renowned guitarist and singer John Pizzarelli has been hailed for reinvigorating the Great American Songbook and re-popularizing jazz. Over the years, he expanded his repertoire to include songs by Paul McCartney, Joni Mitchell, Neil Young, Tom Waits, Antônio Carlos Jobim and The Beatles. His interest in Frank Sinatra led him to dedicate two albums to the legendary vocalist: “Dear Mr. Sinatra” and “Sinatra & Jobim @ 50.”

Pizzarelli will honor Ol’ Blue Eyes at 8 p.m. Thursday, August 11 at the Axelrod Performing Arts Center in Deal Park with his show, “John Pizzarelli sings Frank Sinatra.” He will perform classic Sinatra tunes such as Witchcraft, In the Wee Small Hours of the Morning and Ring-a-Ding-Ding! He will also relate stories from his time spent as opening act for the Chairman of the Board.

Over the years, Pizzarelli has played clubs and concert halls on the jazz circuit, opening for such greats as Dave Brubeck, Ramsey Lewis and Rosemary Clooney. In 1993, he was honored to open for Frank Sinatra’s international tour and later joined in the celebration for Sinatra’s 80th birthday at Carnegie Hall. He brought the house down singing I Don’t Know Why I Love You Like I Do, accompanied by his father, jazz guitarist Bucky Pizzarelli.

He has also appeared as a special guest on recordings for James Taylor, Natalie Cole, Kristin Chenoweth, Rickie Lee Jones and Dave Van Ronk, as well as leading jazz artists such as Buddy DeFranco, Harry Allen, Ruby Braff and Johnny Frigo. In 2005, Pizzarelli was featured opposite Donna Summer, Jon Secada and Roberta Flack on the Grammy Award-winning collection, Songs from the Neighborhood: The Music of Mr. Rogers.

Tickets are $45 in advance and $50 at the door. The Axelrod Performing Arts Center is located at 100 Grant Avenue in Deal Park, just five minutes from downtown Asbury Park, with plenty of free parking. For more information, call 732-531-9106 or visit www.axelrodartscenter.com.