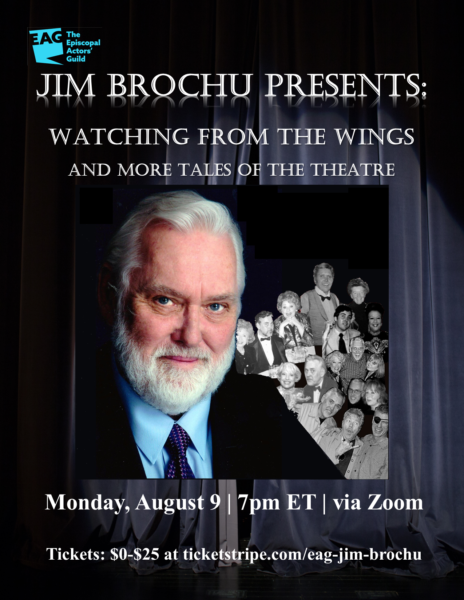 Award-winning actor/playwright Jim Brochu has traveled the world presenting enthralling programs about the legendary, the famous, and the near famous of show business. On August 9, he will be gracing the Guild Hall Zoom with his latest program based on his insightful and funny new memoir, Watching From the Wings. The event takes place Online via Zoom at 7:00 P.M. (ET). Tickets: $0-$25, available at https://ticketstripe.com/eag-jim-brochu

Throughout his 50+ year career, Jim has collected an intimate and hilarious treasure trove of up-close and personal stories of the greats of film and theatre. Joined by our host, award-winning Broadway icon, EAG Member, and author of I’ve Slept with Everybody: A Memoir, Sondra Lee, Jim will bring the subjects of his stories back to vivid life, filling in all the delicious details.

All proceeds from this special one-night-only event will go to help NYC’s professional performing artists in need.

“Jim Brochu has lived among the stars, from Marlene Dietrich to Zero Mostel to Katharine Hepburn. Now that’s a constellation! Jim flew up there, and in [Watching From the Wings], you will, too.”—Michael Riedel, New York Post

“An entertaining and educational first-hand account… [Brochu] paints a portrait of the Golden Age of Broadway as seen through the eyes of someone trying very hard to make it, sometimes living on the periphery and watching it all from the wings, and sometimes taking center stage.”— Steve Schalchlin, from the preface of Watching From the Wings

“You want dish? What Watching From the Wings offers is dish that is pure Wedgwood China. Jim Brochu serves up delicious stories on celebrities from those he’s known, worked with, or simply rubbed elbows.”—Peter Filichia, Broadway Radio

You might know Jim from his guest hosting duties on Turner Classic Movies, as well as his many film and television appearances. Jim Brochu is the only actor in America to have won the New York Drama Desk Award, the Washington, DC Helen Hayes Award, the Los Angeles Ovation Award, the South Florida Carbonell Award and the Palm Springs Desert Star Award, all for Best Actor in a Play. The play in question was Zero Hour in which Jim portrayed the great Zero Mostel for over six hundred and fifty performances. He’s appeared on Broadway in Brigadoon opposite Christine Ebersole and Len Cariou as well as Oliver! with Brian Stokes Mitchell and Melissa Errico. In Washington, DC he was Willy Clark to Theodore Bikel’s Al Lewis in Neil Simon’s The Sunshine Boys. Recently, Jim starred in the Off-Broadway revivals of  The Man Who Came To Dinner as Sheridan Whiteside and at the York Theatre as Sir in The Roar of the Greasepaint; The Small of the Crowd.  As a solo cabaret artist he has appeared at Feinstein’s, 54 Below, the Triad, Metropolitan Room, Birdland and Town Hall. He is married to songwriter-singer Steve Schalchlin, a partnership now in its 37th big year.

Award-winning dancer, actress and director Sondra Lee first appeared on Broadway in High Button Shoes. She was the original Tiger Lily in Peter Pan on Broadway, a role which endeared her to millions when it aired nation and worldwide on television. Sondra acted in many plays, operas and movies, created the role of Minnie Fay in Hello, Dolly!, and danced in Jerome Robbins’ Ballet: U.S.A. She appeared quite memorably in Frederico Fellini’s La Dolce Vita. Her memoir, I Slept With Everybody, is an insightful and entertaining look at her life in the world of dance and theatre.

THE EPISCOPAL ACTORS’ GUILD (est. 1923) is a 501(c)(3) charitable organization. EAG ‘s mission is to provide emergency aid and support to professional performers of all faiths and none who are undergoing financial crisis. The Guild is also dedicated to helping emerging artists advance their careers through scholarships, awards, and performance opportunities. Throughout the year, EAG hosts events and fundraisers including concerts, variety shows, play readings, and professional workshops. www.actorsguild.org

Genevieve Rafter KeddyMay 16, 2022
Read More
Scroll for more
Tap
Liza, The Golden Years of Broadway and Wicked
To Be or Not To Be Could Hamlet Be a New Broadway Musical