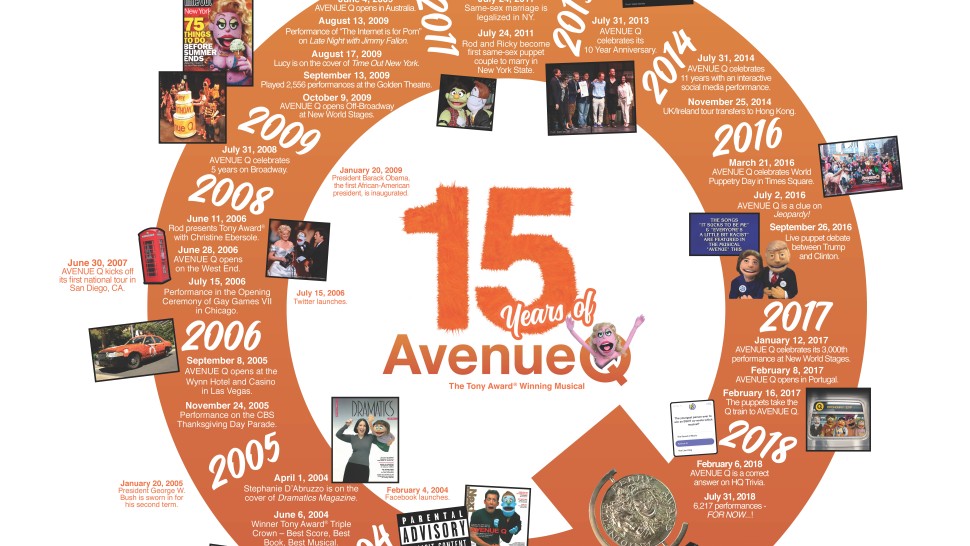 The Tony Award winning Best Musical AVENUE Q – which has been part of the fabric of New York since its sensational debut in 2003 – will mark its 15th anniversary with two weeks of special unique performances at New World Stages (340 W. 50 St.) from Monday, July 16 to Sunday, July 29, 2018 it has been announced by the show’s producers Kevin McCollum, Robyn Goodman and Jeffrey Seller.

The 15th anniversary performance will take place on Tuesday, July 31 at 7pm.

Each of the special anniversary shows will feature audience giveaways and a different surprise number in the show by members of the musical’s legendary original Broadway company and other AVENUE Q alumni.

Tuesday, July 31 The 15th anniversary performance with the current cast of Avenue Q.

As previously announced, The AVENUE Q 15th Anniversary Reunion Concert, a special one-night-only event, will feature the show’s creators and cast members from Broadway and beyond performing cut and alternate versions of songs and sharing behind-the-scenes stories from the show’s history on and Off-Broadway.  The concert will be performed for two performances only at 7:00 PM and 9:30 PM on Monday, July 30 at Feinstein’s/54 Below.  www.54Below.com/Q15

Since it roared into the spotlight – with its singular cast of people and puppets including Princeton, Kate Monster, Rod, Nicky, Trekkie, Christmas Eve, Gary Coleman and Lucy T. Slut – opening on Broadway on July 30, 2003, AVENUE Q has given over 6,000 performances, running seven years on Broadway before transferring to New World Stages in 2009, where it continues to play to large and happy houses.

AVENUE Q has music and lyrics by Robert Lopez and Jeff Marx, book by Jeff Whitty, and is directed by Jason Moore. Based on an original concept by Robert Lopez and Jeff Marx, with puppets conceived and designed by Rick Lyon, AVENUE Q has musical supervision by Stephen Oremus, choreography by Ken Roberson, scenic design by Anna Louizos, costume design by Mirena Rada, lighting design by Howell Binkley, and sound design by Acme Sound Partners. Music director is Brian Hertz. Animation design is by Robert Lopez, incidental music is by Gary Adler, and casting is by Cindy Tolan & Adam Caldwell. Christine M. Daly is Production Stage Manager.

AVENUE Q became an overnight sensation on Broadway in July 2003 following a sold-out engagement and was extended four times after being presented Off-Broadway by Vineyard Theatre and The New Group.

AVENUE Q is produced at New World Stages, as it was on Broadway, by Kevin McCollum, Robyn Goodman, Jeffrey Seller, The Vineyard Theatre and The New Group.

At New World Stages, AVENUE Q performs Mondays, Wednesdays, Thursdays and Fridays at 8:00 pm, Saturdays at 2:30 pm and 8:00 pm, and Sundays at 3:00 pm and 7:30 pm. Tickets can be purchased through Telecharge. A limited number of rush tickets are available at the box office for each performance.