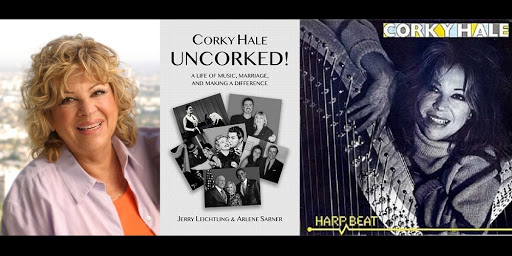 Corky Hale (Pianist, Harpist and Vocalist) has performed at The White House with Tony Bennett, soloed with Barbra Streisand in Central Park and at the Hollywood Bowl, and performed with Björk on her MTV Special in London.  Hale has also appeared with George Michael at London’s Royal Albert Hall and Washington, D.C.’s RFK Stadium.  She has played harp for Liberace (on his television show and at Madison Square Garden) and Judy Collins, piano for Billie Holiday, Mel Tormé and Peggy Lee, and sung with the bands of Harry James, Ray Anthony and Jerry Gray.Hale produced Give ‘em Hell Harry, starring Jason Alexander at the Tiffany Theatre in Los Angeles in 1992.  Since 2000 Hale has frequently produced and performed her star-studded show Corky Hale and Friends:  From Tin Pan Alley to Beverly Hills, at the Beverly Hills Civic Center.  In March 2003 her Salute To Hollywood Songwriters opened the newly restored Ferry Building at a Gala for San Francisco’s Raising Hope charity, and in 2002 this show opened the 25th Anniversary Season of the 1,000-seat La Mirada Theatre.  In that same year Hale’s musical Boulevard of Broken Dreams broke Box Office records at the Coconut Grove Playhouse in Florida.  She also produced 1998’s Lullaby Of Broadway at the Tiffany Theatre in West Hollywood, voted one of the “10 Best Shows” of the year by the Los Angeles Times.  Later a concert version of the show starring Sally Kellerman was presented at the University of Judaism.

On November 22, 2007, Corky Hale made her debut at Carnegie Hall as a Piano Soloist with the New York Pops Orchestra, under the baton of Guest Conductor, Barry Levitt.  In 2008 she appeared Hale’s harp, piano and vocals can be heard on her three albums “CORKY!;” “Have Yourself A Jazzy Little Christmas;”and her current CD “Corky Hale and Friends…I’m Glad There Is You.”  Corky Hale’s CDs are available at www.cdbaby.com and www.amazon.com.Her sold-out performances at the Oak Room at the Algonquin in New York, Davenport’s in Chicago, the Cinegrill and Herb Alpert’s Vibrato Grill Jazz…etc. in Los Angeles, the Plush Room in San Francisco, and Pizza On The Park in London have led Los Angeles Times’ jazz reviewer Don Heckman to observe that Hale is “more than a triple threat,” and the San Francisco Examiner’s Philip Ellwood noted her performances are “of cyclonic proportions.”  She has also been seen and heard on The Tonight Show With Johnny Carson.

She has been happily married since 1970  to songwriter Mike Stoller of the team Leiber & Stoller, whose show Smokey Joe’s Café still holds the record as the longest running musical revue in Broadway history.  She and her husband built the state-of-the-art Dorothy Hecht Health Center in partnership with Planned Parenthood Los Angeles, which serves 2,000 women monthly.  She and her husband are currently building another health center in South Los Angeles.  In 2011 Hale was honored as the Champion of Choice by NARAL Pro-Choice America (National Abortion Rights Action League) for her lifelong advocacy for women’s reproductive rights.  READ MORE

Our interviewer is James Gavin, a free-lance journalist and author of four books and dozens of NY Times Articles. He is a world-wide public speaker, a Grammy nominee and recipient of two ASCAP Deems Taylor – Virgil Thompson Awards for excellence in music journalism.

G. H. HARDINGSeptember 20, 2021
Read More
Scroll for more
Tap
The Glorious Corner
What to Watch: May 30