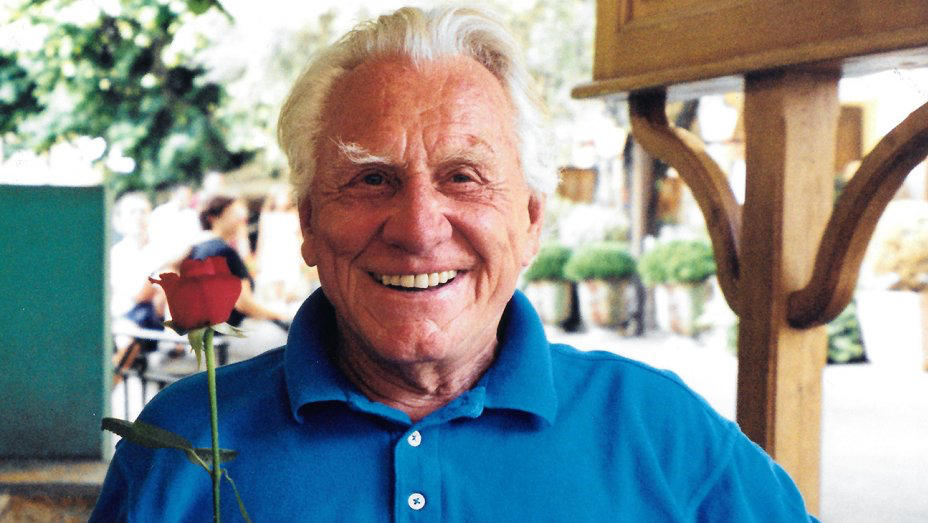 Joseph Sirola, the genial actor and Tony Award-winning producer who was known as “The King of the Voice-Overs,” has died. He was 89.

Joseph A. Sirola, whose strong, craggy, face you’ve seen on television, screen and stage, and whose voice – rich, deep, resonant, distinctive and in such demand that he was called “The King of Voice-Overs,” died ??? at the NewYork-Presbyterian Weill Cornell Medical Center in New York City. He was 89 years old.

His death was confirmed by his long-time companion, and the absolute love of his life, Claire Gozzo, who said he died from complications of respiratory failure.

Following graduation, and his service in the Korean War, he landed a job at the Kimberly Clark Co. as a sales promotion manager. At 28 years old and with a bright future Park Avenue, Joe decided to please his drama-major girlfriend and enroll in an adult education ‘Acting 1’ course at Hunter College. Soon he was having fiery Monday morning meetings with his ‘Kleenex’ sales team, and then running off, to auditions.

After talking his way into his first audition, Joe opened off-Broadway in his first professional acting job. Brooks Atkinson of the NY Times, the most prestigious and respected critic in all Broadway at the time said, “Joe Sirola played the part of the gassed-up landlord vigorously, alternating between tender remorse and brutishness.”

This led to a co-starring role with Tammy Grimes on Broadway in “The Unsinkable Molly Brown,” in which he created the role of Christmas Morgan.  While performing on stage with Tammy Grimes at night, he was busy days with the CBS series, “The Brighter Day” in which his role as Peter Nino was a regular for some two years. His ‘fans’ from the series included Ethel Merman, Richard Rogers, Tallulah Bankhead, Mary Martin, and many other notables.

He continued on Broadway with the Steve Lawrence-Eydie Gorme hit, “The Golden Rainbow” and a particularly notable theatre role playing Ludlow Lowell in the acclaimed Broadway revival of “Pal Joey.” One of Joe’s favorite theatre role was Alfie Doolittle in “My Fair Lady,” and being able to sing “With a Little Bit of Luck.”

And then there were his Hollywood movies– co-starring in character roles with Rock Hudson and Gina Lollobrigida in “Strange Bedfellows”; with Clint Eastwood in “Hang ‘Em High” and others such as George Stevens’ “The Greatest Story Ever Told,” “Super Cops,” and “Hail to the Chief.”

Joe appeared in over 600 Television appearances, too – everything from his own series “The Montefuscos,” “The Magician,” and co-starring with Jack Scalia in “Wolf,” to guest star spots in such popular shows as “Quincy,” “Matt Houston,” “Mission Impossible,” “Visions,” “Rhoda,” “Hawaii Five-O,” “The Untouchables,” “Andy Griffith,” “Perry Mason,” “Man from U.N.C.L.E.,” “Get Smart,” “NYPD Blue,” “Rockford Files,” “Civil Wars,” “Silk Stalkings” playing ‘Champagne Tony Marella,’ and roles of  which he was particularly proud, playing Tom Paine in Steve Allen’s “Meeting of the Minds” and opposite James Cagney in “Terrible Joe Moran.”

Ultimately Joe was probably best known for his voiceovers which were a career in themselves and heard coast to coast. His amazingly successful record as spokesman for top nationally recognized products won him some 25 “Clio” Awards.  The voices you heard for Vicks Formula 44, Wendy’s, Boars Head Meats, Mobil, GE, Nyquil, Ford, Hertz, Club Med, and so many more, were all the voice of Joe Sirola.  His voice also highlighted the entire “I Love New York” campaign and is the one heard, for over 20 years, on the Empire State Building tour.  The distinguished Wall Street Journal paid tribute to this area of his talents with an extensive front-page story in 1970 titling him, “The King of the Voice-Overs.”

In the last few years Joe returned to Broadway as a Tony Award-winning producer.  Among his NY Theater producing credits are Cagney: The Musical,the Tony winning Best Musical A Gentleman’s Guide To Love And Murder; The Trip To Bountiful; The Motherf**ker with the Hat; Love Letters (Revival); Ghetto Klown;Rogers And Hammerstein’sCinderella; Stick Fly andTime Stands Still.

Joe was a long-time bachelor who lived life to its fullest while remaining devoted to his family, both in New York and abroad, and his trademark rose garden. And, in 1998, happily discovered that he had a daughter and three granddaughters living in Holland.

Joe is also survived by all his showbiz friends and colleagues who loved him and shared so much of his generous life at places like the Players Club, The Friar, Wykagyl Country Club, National Arts Club, The New York Athletic Club, The Lambs, Sardi’s, and at Joe’s annual “Champagne and Roses Soirée” on his fabulous penthouse garden.

Joe loved performers and performing and was a performer through and through.  The week before he died, while gasping for air, Joe said to his press representative, “Hey kid, when I get outta here, we have to find me a new agent!”

On the big screen, Sirola appeared in Strange Bedfellows (1965) opposite Rock Hudson and Gina Lollobrigida; in George Stevens’ The Greatest Story Ever Told (1965); with Clint Eastwood in Hang ‘Em High (1968); and in The Super Cops (1974), directed by Gordon Parks.

Sirola portrayed bandleader Freddy Fleet on a season-three episode of CBS’ The Andy Griffith Show and was U.S. spy Jonathan Kaye on a few installments of the original Hawaii Five-O.

He played the patriarch of an Italian-American family on NBC’s The Montefuscos, a sitcom from That Girl creators Bill Persky and Sam Denoff that lasted just a handful of episodes in 1975. He also was a regular on another short-lived NBC series, 1974’s The Magician, starring Bill Bixby.

This obituary was loving written by his longtime publicist Gary Springer.

Suzanna BowlingOctober 17, 2021
Read More
Scroll for more
Tap
The Kennedy Center and Broadway Center Stage Marches Out a Magnificent Music Man
Is My Very Own British Invasion Headed To Broadway?