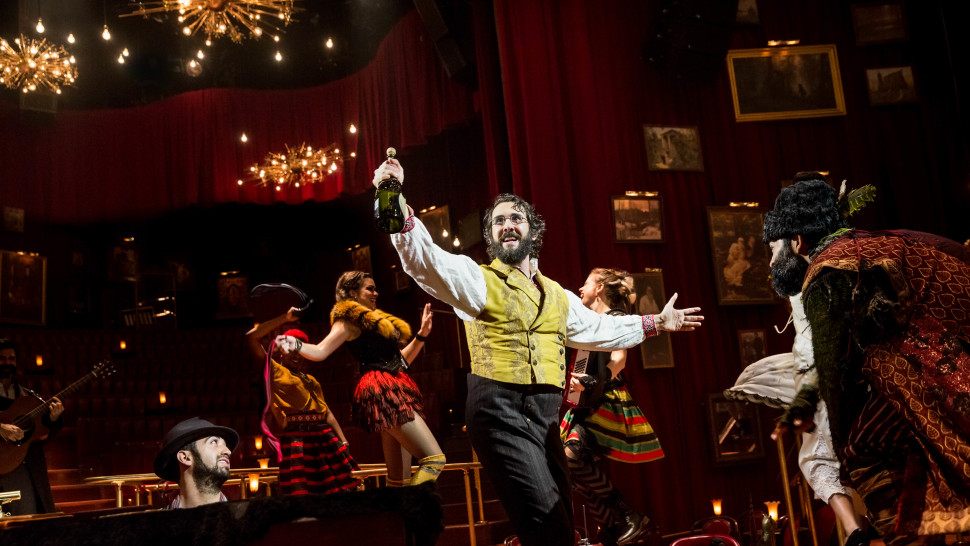 Josh Groban Shines in The Visually Stunning Natasha, Pierre & the Great Comet of 1812

Josh Groban Shines in The Visually Stunning Natasha, Pierre & the Great Comet of 1812 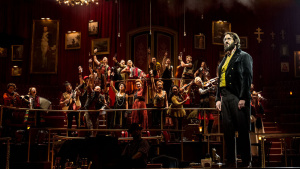 The visually stunning Natasha, Pierre & the Great Comet of 1812 at the Imperial Theatre, has improved in many ways from it’s other three incarnations. The set has always been spectacular, but here at the Imperial Theatre, set designer, Mimi Lien, along with the gorgeous lighting by Bradley King have transported us to the Russian Opera. The audience is everywhere including onstage. Runways, make shift bars, staircases, red velvet and stunning starburst chandeliers twinkle as they rise and fall. Even the half-period/half-punk costumes, by Paloma Young, set the tone. I expect all these elements to be Tony nominated, if not win. Rachel Chavkin’s direction is another work of art. Ms. Chavkin moves her players around with such grace and intimacy, the audience is sure to be astounded in it’s opulence. Again I see a Tony nod.

Another plus to this version, is the debut of Josh Groban who sings so superior, it is hard not to be in awe. His rendition of “Dust and Ashes,” is heavenly. Like any of the arias from Les Miz. I expect this song to stand out long after this show. Every time Mr. Groban opened his mouth, it was divine and this is not easy with Dave Malloy’s semi operatic score. More on that later. Mr. Groban plays piano and accordion, besides everything else. Even Mr. Groban’s acting is splendid. 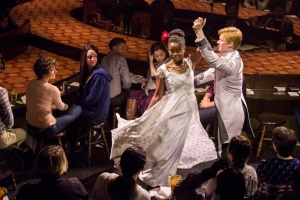 For those who do not know Natasha, Pierre & the Great Comet of 1812, it is an abridged version of “War and Peace.” Think musical cliffs notes. The opening number, introduces the principals, singing “It’s a complicated Russian novel Everyone’s got nine different names So look it up in your program We’d appreciate it, thanks a lot.” From there we follow Natasha (Denée Benton), who is engaged to the Russian Prince Andrey (Nicholas Belton), who leaves ASAP to fight in the war. She goes to stay with Marya D(A husky and take charge Grace McLean) along with her cousin and confidante, Sonya (played by a wonderfully moving Brittain Ashford). Andrey’s father (also Mr. Belton) and his plain put upon sister Mary (Gelsey Bell) disapprove, which in a way starts the ball moving. Natasha, dazzled by Moscow society, falls for Anatole (the delightful Lucas Steele). Anatole is known for being a womanizer. He gets his sister Hélène (the sexy Amber Gray) to help bring them together. Her cuckold, husband Pierre (Groban) is a friend of Prince Andrey. Anatole’s friend Dolokhov (the highly sexy Nick Choksi), stirs up trouble and in the end Natasha follows her heart to ruin. It isn’t until Pierre shows her kindness that she can smile again.

I was a huge fan of this show in its previous incarnations. What I love about this production is the diction of the actors and the fact you can finally understand the lyrics, which are highly clever. The changes in the book, add more for Pierre. Josh Groban brings the pain and despair of Pierre to light, something Dave Mallory could never do. I see a Tony nod here. Lucas Steele has also grown into his part and deserves a Tony nod. 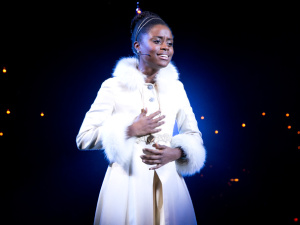 What is lacking from this production is the force of energy that was Natasha. The role made Phillipa Soo a star, this will not do the same for Denée Benton, who is beautiful, sings well, and can act. What she lacks is star power and why her name is over the title is beyond me. Who would have been a better choice is Solea Pfieffer who does have the “it” factor. I never once cared for the plight of Natasha and that is a problem.

Also this production really shows off Dave Malloy’s score which is high on Slavic folk music, electronica , ballads and descriptive narration, where the characters sing about themselves in first person. Or Matias, who is an amazing music director, does well with the orchestrations, but this is not music that grows on you.

This show falls into the same category of Candide and Mallory is not Bernstein. I do not see Natasha, Pierre and the Great Comet of 1812 making the Tony cut for Best New Musical.

Suzanna BowlingSeptember 15, 2021
Read More
Scroll for more
Tap
Don’t Miss Rory O’Malley Singing All The Roles in Beauty and the Beast
Do Not Miss Ride the Cyclone