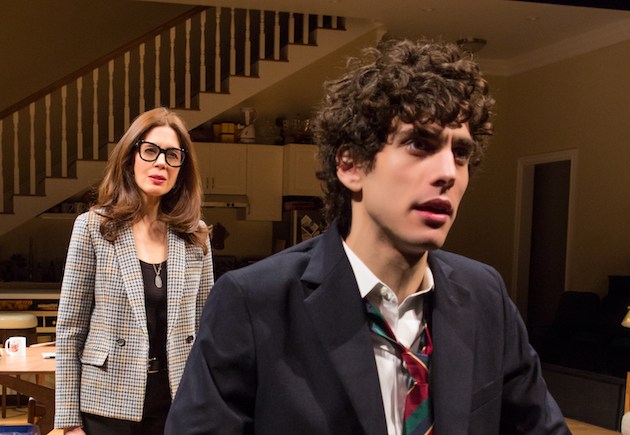 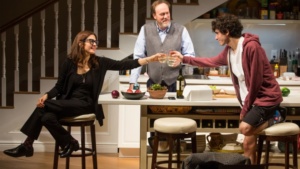 Joshua Harmon’s new drama, Admissions, playing at Lincoln Center’s Mitzi E. Newhouse Theater is a damned-if-you-do, damned-if-you-don’t play to review. It takes on the hard subject of integration. If we think that the most talented deserve to move forward no matter their gender or color, we are racist. If we think that we should step aside so that the numbers are more matched, then we have entered into the more “PC” version of life. My question is, where do those who step aside sacrificing their abilities go? This is what is addressed, though not answered in Admissions. 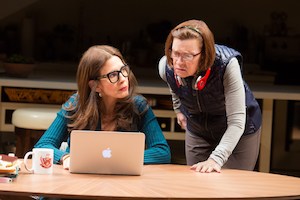 The show starts as Sherri Rosen-Mason (Jessica Hecht) is berating Roberta’s (Ann McDonough) work on Hillcrest’s admissions catalog. Among the 52 photos, only three feature students of color, and even though one is the correct demographics, it is not enough color for Sherri. She states, “If nonwhite prospective students open up that catalog and they don’t see anyone who looks like them, that will be the end of their journey”.  Sherri is condescending to her colleague, whom she feels is not liberal enough for this prestigious and expensive college-prep school in New Hampshire. The fact is, Roberta doesn’t “see color” and it is not pictures keeping back the students, but funding.

Back at Sherri’s home, she discusses her day with Ginnie (Sally Murphy) whose husband is a teacher at Hillcrest, while Sherri’s husband, Bill (Andrew Garman) is headmaster. It is implied that Ginnie’s husband isn’t further along because he is African American. 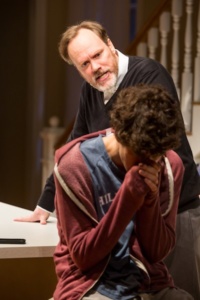 Charlie (Ben Edelman), Sherri’s 17-year-old son, dreams of going to Yale, but this has been derailed. His best friend Perry has been accepted and Charlie is furious because everything he has set his hopes, dreams, and hard work on is going to people of color or another gender, but not because they are the most deserving. Charlie is a better candidate, but Perry fits the demographics. Charlie was also in-line to be the editor of the school’s newspaper until a parent wrote that the editor had never been a woman, so, again Charlie lost out to someone not as qualified, but who made the quota’s look better. Charlie states, ” I would really like to meet the person who decides who counts as a person of color and who doesn’t”… “I’ll just stand in the corner taking it all in until I can’t fucking take it anymore.” What he is saying may be PC incorrect, but it is the truth, so the audience applauds. Then Charlie’s father berates him, calling him an “overprivileged brat” and a “racist spoiled little shit”. I seriously expected this play to end with this child committing suicide. 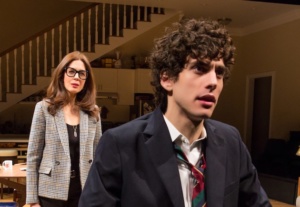 What happens next is rather brilliant. Sherri has managed to turn the school’s demographics to 18 percent but that is “still an embarrassingly low number, but it’s 300 percent better” than when she started. The problem here is lack of money to pay the tuitions and these numbers have come up due to scholarships. Charlie decides to do a 180-degree turn and puts his parents’ teachings into practice. He writes in the school paper and then tells his mom he is going to a public school and then to community college. He states that the money they pay for his tuition should be used to bring those numbers up. He’s “trying … to be the change I wanted to see in the world”… “If there are going to be new voices at the table, someone has to stand up and offer someone else his seat”.

Now you would think Charlie’s super-liberal parents would be thrilled over their son’s sacrifice, but no. They’ll fight for diversity when it doesn’t concern their lives, but when it hits home, all bets are off.  In their eyes, Charlie is jeopardizing his educational future and life and they are not having any of that.

The actors are all at the top of their game, hitting the ball out of the park.

Daniel Aukin’s direction throws Harmon’s words into our faces, showcasing the hypocrisy of where we are at. Admissions brings privilege and affirmative action into play but gives no resolve, maybe because there is none. As Hamilton puts it, we all want to be in the room where it happens, so let’s all get together and make it a bigger room.