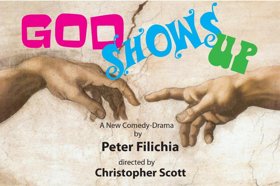 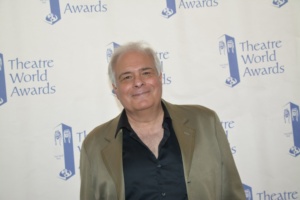 Eric Krebs will present God Shows Up, a new comedy-drama by noted theatre journalist and playwright Peter Filichia. Performances will begin on Thursday, January 31 at 7:00pm (for a limited engagement through February 21, 2019) at The Playroom Theater (151 West 46th Street – between Broadway 6th Avenue). Opening Night is set for Sunday, February 10 at 7:00pm.

“For a number of years, I have wondered, if there is a god, how would that god would respond to the world that those in his image have built,” said producer Eric Krebs explaining the motivation of the play. “I challenged Peter Filichia to write such a play, and here we are… God Shows Up. Peter’s script is far more controversial, funny and philosophical than I ever might have imagined. I can’t wait for the shouting matches to begin after performances.”

God Shows Up will play the following performance schedule: Thurs-Sun at 7 pm. All tickets are $20 and may be purchased online here.

Peter Filichia (Playwright) has written reviews and features for a newspaper (The Star-Ledger), magazine (TheaterWeek), and the Internet (Broadway Select, Masterworks Broadway, Music Theatre International, Playbill,Theatermania). He’s written six books on theater: Let’s Put on a Musical (1991 and 2007 editions); The Biggest Hit of the Season/The Biggest Flop of the Season (2010); Broadway Musicals’ Most Valuable Players (2011); Strippers, Showgirls, and Sharks (2013); and The Great Parade (2015). His one-act play Games, about bullying, has had school productions in all 50 states. His full-length play, Adam’s Gifts was a finalist for the first Terrence McNally Award. His ten-minute play Our Dead Classmate was produced in San Juan Capistrano. He was president of the Drama Desk Awards from 1992 through 1996, and now serves on its current nominating committee, as well as the selection committee for the Lucille Lortel Awards and the Theatre World Awards, whose ceremony he annually writes and emcees.

Christopher Sutton (_Dr. Thomas Isaac Reha_n) – New York: Mark Antony in The Harlem Shakespeare Festival’s Antony and Cleopatra, Henry VI, Ancient History, I Love You, You’re Perfect, Now Change, and the World Premieres of: Flight of the Lawnchair Man (Outstanding Actor Award), Lissabon, Lola-Lola, Bloodties, Valueville, Hell Is For Real, The Perfect 36, Battleship Potemkin, Golf, and The It Girl directed by Jerry Zaks. Christopher received an Outstanding Actor award for Monty Python’s Spamalot under the direction of Mike Nichols, and is a recipient of the Barrymore Award, and the Sudler National Prize in the Arts. Much love and gratitude for Eric, Chris, Peter, and of course, Lynnie and our Dylan. www.ChristopherSutton.net.

Suzanna BowlingMarch 2, 2021
Read More
Scroll for more
Tap
You are There at BroadwayCon With Disney Theatrical at 25: The Stars Align
Broadway’s Revival of West Side Story Continues its Nationwide Search for LatinX Performers For Maria, Anita, and Bernardo