Juan Carlos Quintero’s Table of Five! Will Get You In The Mood 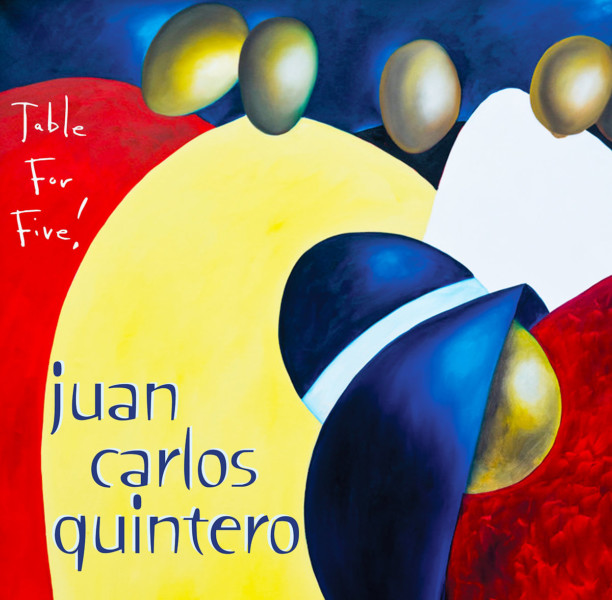 Juan Carlos Quintero’s Table of Five! Will Get You In The Mood

Musically through the soul and guitar of Juan Carlos Quintero’s music the heart and soul of Lastin Jazz comes through with a joy. He celebrates life with his music.

Quintero first picked up the guitar at age eight in his homeland of Colombia. He was inspired by masters like Quincy Jones, Gato Barbieri, Cal Tjader, Miles, Tito Puente, Antonio Carlos Jobim, Jeff Beck and Carlos Santana, but he felt that Chick Corea, Eddie Palmieri, Gato Barbieri and Gary Burton best brought out the excitement of bridging melodic improvisation with composition. He attended Berklee College of Music in the early 80’s and  launched his own solo career later in the decade. He studied composition at Boston’s New England Conservatory with George Russell before moving to Los Angeles, where he played session work with the help of his mentor Tommy Tedesco (The Wrecking Crew). He composed a volume of original music and sought out old Boston schoolmates to help bring the music to life.

Blending contemporary jazz with music styles from Colombia, he entered the world, of jazz and jazz radio. His first two albums, were self-titled efforts in 1990 (featuring Tommy Tedesco). Critically acclaimed records followed in 1997 with The Way Home on Escapade. He released records on Moondo Records, a label he founded in early 2000. A decade of music ensued with notable releases, Medellín, Los Musicos, Los Primos, Las Cumbias…Las Guitarras, Joy To The World, and Guitarras De Pasión. He was a world-class guitarist/recording artist able to produce, perform and record a world of music while nurturing a signature sound.

Table of Five! features Quintero’s longtime musical compatriots Eddie Resto/bass, Joe Rotondi/piano, Aaron Serfaty/drums, Joey Deleon/percussion, and Quintero on electric guitar. Quintero, who is known for his stylish, tasty work on the nylon string guitar, decided to record for the first time on the semi-hallow electric guitar to highlight the new direction of his music and label. Rather than focusing on the Latin repertoire, Quintero performs jazz standards, expanding the scope to include World Music as well as music from the Great American Songbook. Table of Five is the first of his own albums that Quintero produced since his debut album in 1988. “Participating as a player while being responsible for all aspects of this recording was a daunting task,” says Quintero. “But my bandmates, my brothers, had my back in every way.” Although Quintero was the sole producer, the arrangements were a collaborative effort shared by the entire band. Quintero says, “We all had input in the process. We basically worked from an outline of the arrangements, improvising the music as we went. I didn’t want to over arrange the songs so much that we changed them into something completely different. I feel you need to trust the composer and honor his or her intention. The core of the music needs to survive your treatment.”

Table of Five! comprises five jazz standards, three Latin standards, and two original compositions by Quintero. Although Table of Five is somewhat of a musical departure for Quintero, it reflects the colorful sounds and diverse rhythms of his birthplace, Medellín, Colombia. And as always, Quintero’s guitar sound is fluid with more than a touch of romantic wistfulness. He and his tight-knit band of high caliber, seasoned musicians have created a project where their improvisatory approach does not overwhelm the music; rather, it allows those beautiful melodies to shine.

Suzanna BowlingJune 20, 2022
Read More
Scroll for more
Tap
Respect Where The Demons of Aretha Franklin Take Over
Talking With Mrs. Doubtfire’s Analise Scarpaci About Her New EP and More