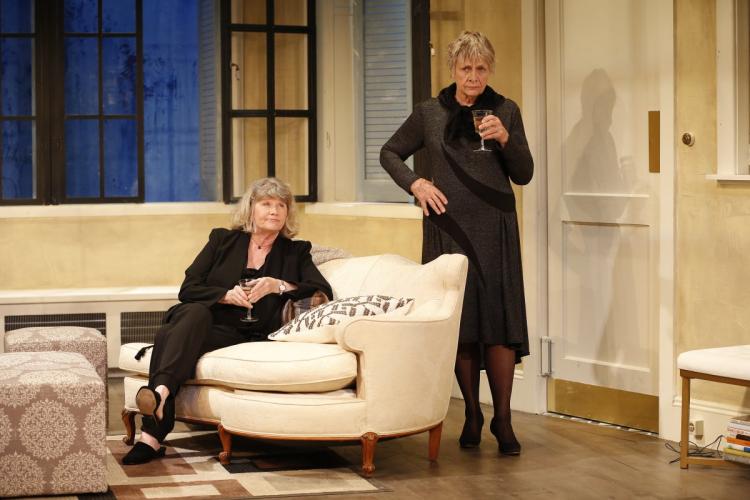 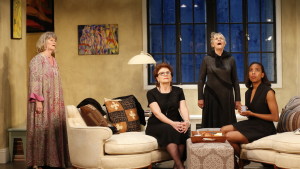 Israel Horovitz ‘s new play Out of the Mouths of Babes, at the Cherry Lane Theater, is entertaining summer fare. Giving laughs freely, the show brings back the feeling of Designing Women or The Golden Girls. Judith Ivey and Estelle Parsons take us on a whimsical fantasy, that could have been written out of the pages of Norman Mailer’s ex’s on a good day.

Here Evelyn (Ms. Parsons) and Evvie (Ms. Ivey), or “Snookie 2” have been gather to mourn their ex husband and lover in his Paris apartment by his last girlfriend Marie-Belle (Francesca Choy-Kee). Snookie 2 broke up Evelyn’s marriage to the man so the catty conversation is inevitable. It seems this lifelong womanizer had a habit of cheating. His first wife, the original Snookie, killed herself after Evelyn came along. All the ex’s have met while they were students at the Sorbonne.

In between Evvie was wife 3, Janice (Angelina Fiordellisi) who has tried to kill herself more than once. When Janice read about her former husband’s death online she shows up. She would have been invited had Marie-Belle thought she had still been alive. It turns out Marie-Belle is in contact with her dead husband who tickles her constantly. She wants the women to live as one.

All the women are about 10 years apart in age and each actress makes the most of their role. Ms. Parsons is hysterical especially in her repartee with Ms. Ivey. These two bring cynicism and acidity to a new level. Ms. Choy-Kee brings an air of lightness that makes this seem plausible. If you had been at the Norman Maier memorial and if you knew his ex wives this is actually more plausible than you would think. Insane yes, but plausible.

Barnet Kellman’s direction is like a roller coaster ride, fun but not anything more than that a carnival ride. Neil Patel’s set is full of art and if you read your playbill even more interesting when you see who supplied the paintings. Rosie O’Donnell, Eve Plumb, Billy Dee Williams and Tina Louise are all represented.

Out of the Mouths of Babes is just what New York needs to take it’s mind off the horrors of this world.

Out of the Mouths of Babes: Cherry Lane Theatre, 38 Commerce, until July 31st.

Suzanna BowlingMay 12, 2022
Read More
Scroll for more
Tap
Katdashiana Where Singing is More Like a Howl
The Beacon Awards and Inside Broadway Celebrated at The Essex House