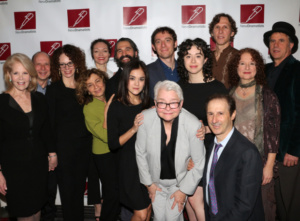 T2C talked to two-time Tony Award winner Judith Light. Light made her professional stage debut in 1970, before making her Broadway debut in the 1975 revival of A Doll’s House. Her breakthrough role was in the ABC daytime soap opera One Life to Live from 1977 to 1983, where she played the role of Karen Wolek. For this role, she won two Daytime Emmy Awards for Outstanding Lead Actress in a Drama Series. She later starred as Angela Bower in the long-running ABC sitcom Who’s the Boss? from 1984 to 1992, and later starred in many television films and short-lived series. She played the recurring role of Elizabeth Donnelly in the NBC legal crime drama Law & Order: Special Victims Unit (2002–2010) and Claire Meade in the ABC comedy-drama Ugly Betty (2006–2010), for which she was nominated for a Primetime Emmy Award in 2007.

She received her first nomination for a Tony Award in 2011, for her performance in the original Broadway play Lombardi. In 2012 and 2013, Light won two consecutive Tony Awards for Best Featured Actress in a Play, for her performances in Other Desert Cities and The Assembled Parties. From 2013 to 2014, Light played the role of villainous Judith Brown Ryland in the TNT drama series, Dallas. In 2014, she began starring as Shelly Pfefferman in the Amazon Studios critically acclaimed dark comedy-drama, Transparent for which she received Golden Globe, Primetime Emmy, and Critics’ Choice Television Award nominations.

She has also received the Drama Desk Award for Outstanding Costume Design, an Emmy Award, and an Academy Award nomination for Original Song. She also received the 2012 Director Award for Vision and Courage from the Athena Film Festival at Barnard College in New York City. She was the director of the Broadway musical Spider-Man: Turn Off the Dark and an off-Broadway production of A Midsummer Night’s Dream.

All photo’s and video Stephen Sorokoff.

Suzanna BowlingAugust 9, 2022
Read More
Scroll for more
Tap
He Says: Sojourners & Her Portmanteau The Star is Born
they promised her the moon There’s a Better Story Hidden Inside There