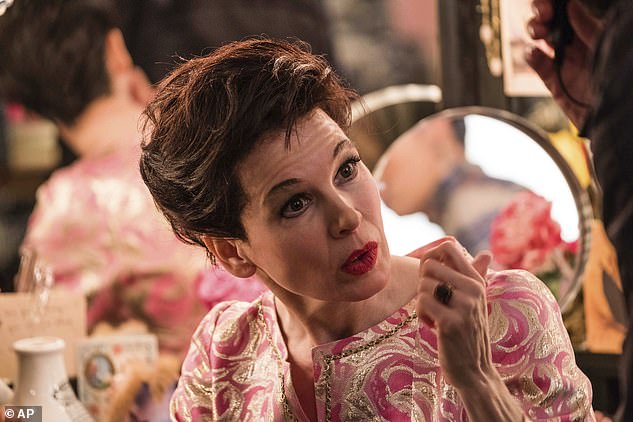 Just hand the Oscar over to Renée Zellweger, for her devastatingly heartbreaking portray of the legendary Judy Garland. Tom Edge’s script for Judy, focuses on the last year of her life, when she did a series of concerts in London. It is well crafted, thoughtful and makes us remember her life was beyond tragic. It’s almost as if she never stood a chance at being a well rounded and happy human being. Based on the stage play, End of the Rainbow, Judy grabs us and dares us to look away. You can’t as you realize just how doomed this amazing performer was.

Those years saw Judy, bankrupt, fighting for the custody of her two children and crowds booing. We get flash backs of a young Judy (Darci Shaw), being bullied, sexual touched, given drugs, not being able to eat, sleep or be normal teenager and we forget or refuse to remember this was this artists life. Director Rupert Goold (King Charles III), doesn’t manipulate his audience, but allows us to experience the pain, the self hate, the yearning for love and acceptance and Ms. Garland’s unavoidable ending.

Sid Luft (Rufus Sewell), an ex-boxer who was abusive, jabs and delivers the blow that finally sends Judy down the rabbit hole. His constant fight to take away Lorna (a wonderful Bella Ramsey) and Joey (Lewin Lloyd), drives Judy to London to financially recover. Judy is crippled by severe anxiety coupled with insomnia, which leads to self-destructive tendencies of alcoholism and drug use. As Judy implodes, the British personal assistant, Rosalyn Wilder (a winning performance by Jessie Buckley) assigned to her pulls Judy together, getting her onstage despite her steadfast resistance. Conquering her demons, Judy shines like the star she is. It has been inbred, it is her natural abilities, despite the emotional turmoil and they can not diminished her talents.

The only solace Garland finds in London, is with a couple of gay British fans (Andy Nyman and Daniel Cerqueira) who come to her concert every night. One faithful night, Judy goes to their flat and performs an impromptu rendition of “Get Happy” reduced to tears her new friend accompanies her on the piano. It is in this scene, that we realize how much Judy Garland desperately needed love.

When Mickey Deans (Finn Wittrock NYTW’s Othello), Judy’s last husband arrives in London, Ms. Garland demise begins in earnest. The opportunist Dean’s proposes a deal, which will give her back her children and a normal life. It is a lie and it destroys her.

Luft who stole Judy’s money, with a lot of it going to his excessive gambling, which the film glosses over, flies to London to tell her, her kids wish to stay with him. This is the nail in the coffin.

Ms. Zellweger is effervescent. We never see anybody up on that screen but Ms. Garland, being sarcastic, ironic, loving, needy, lost and forever a star. Zellweger channels the role while singing “By Myself,” “Come Rain or Come Shine”, “The Trolley Song” and Judy’s iconic “Somewhere Over the Rainbow”. She sings live, and I was in awe of what it took to get that sound and give across this magnificent performance.

Rufus Sewell, makes us see Sid in a multidimensional light.

It is in the end when Judy, longs to give back to her audience, but is so trapped she can’t finish “Somewhere Over the Rainbow”, and her audience for the first time gives back and sings to her, that you realize how much she gave and how little she got. She died at 47, heartbroken, used up and alone.