Julian Lennon and The Moms, Denise Albert Talk About “Love the Earth” 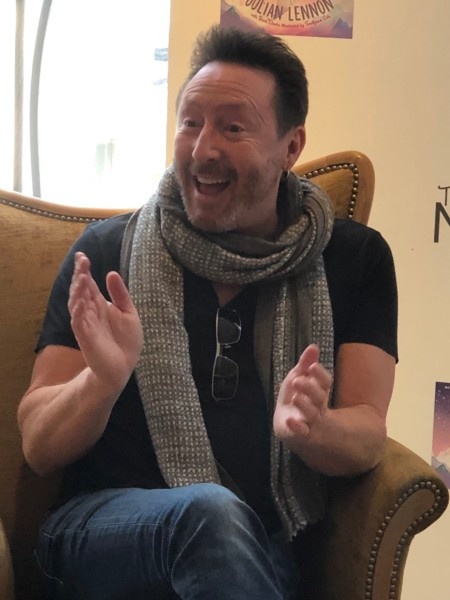 Julian Lennon and The Moms, Denise Albert Talk About “Love the Earth”

Julian Lennon, singer turned best-selling children’s author has written a new book. With the help of The Moms, Denise Albert, Lennon launched his latest book, “Love the Earth,” with Bart Davis and Smiljana Coh at a Mamarazzi event.

“Touch the Earth” and “Heal the Earth” proceeded Lennon’s newest book “Love the Earth”. These books use clever interactive narratives to send kid readers on wondrous trips to save the planet.

His team will soon head to LA to pitch it to potential Hollywood partners, as Gaumont is a worldwide TV distributer.

These books take the reader on wondrous trips to save the planet.

Julian Lennon, is the founder of the White Feather Foundation, which is named because when Julian was a little boy his dad said that if anything should ever happen to him that he would be okay, because a white feather would show him that everything would be all right. Julian was visited by members of the Mirning tribe, an indigenous group from the coastal regions of the Great Australian Bight. A tribal elder presented him with a white feather and asked Julian to use his voice to help them with their plight.

The White Feather Foundation, an organization that raises funds for environmental, humanitarian, and clean water projects. The WFF has helped build pipelines in Cameroon, wells in Ethiopia, latrines in Burkina Faso, and funded film fellowships for indigenous voices in New Zealand, among many other projects.

Julian began his career as a musician, releasing six albums (he sounds uncannily like his father).  Julian is the son of John and his first wife Cynthia and the reason behind the song “Hey Jude.” He entered into the world of humanitarianism bringing enlightenment to the earth through his books.

Julian produced Whale Dreamers, a documentary that shows how the Mirning were dispossessed of both their lands and their spiritual connection to the whales. The film was part of the Cannes festival in 2007; the same year, Julian founded The White Feather Foundation.

“Love the Earth,” takes four children of different backgrounds into a journey using a magic white feather that changes into the White Feather Flier. This magical airplane takes the children around the world and teaches them how to love and appreciate planet Earth. The children’s journey takes them to places where medical care is not easily accessible, to polluted oceans and to places where education is not a given and futures are not bright. The White Flier teaches the children how to overcome these obstacles through spreading hope and love. The message of love, humanity and hope is illustrated throughout the book.

Suzanna BowlingSeptember 23, 2022
Read More
Scroll for more
Tap
How To Turn Casino Bonus Offers Into Cash Money
What effect will AR have on online gambling experience?