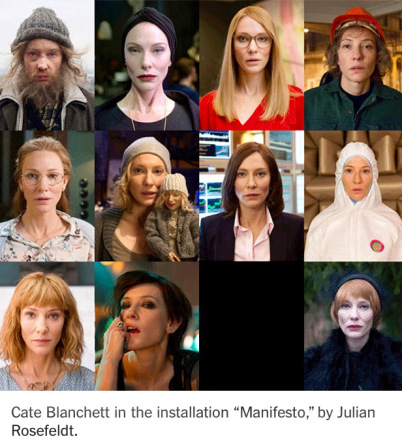 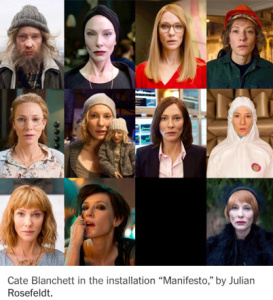 To be completely frank, this blog started out as basically an ode to Cate Blanchett, the central figure in Julian Rosefeldt’s video installation that I saw the other day at the Park Avenue Armory (that sadly closed today). I imagined writing about Blanchett as the brilliant actress that she is, and posting on the night she makes her Broadway debut in The Present. Sadly, I have not seen it yet, so no review tonight, but I will be posting my review next weekend as my press tickets are for this coming Thursday, and I can’t wait to see it. I’ve seen her numerous times on the stage here in NYC, but not on the Broadway stage. She blew my mind in Streetcar Named Desire and Hedda Gabler years ago at BAM, and Uncle Vanya in DC. I hear pretty good buzz about The Present, and of course, raves about her performance. The play itself is not getting the same raves as her performance though, but I’m going to stay clear of the reviews that come out tonight, I want to write my review fresh and clear of anyone else’s opinions. So stay tuned for mine… 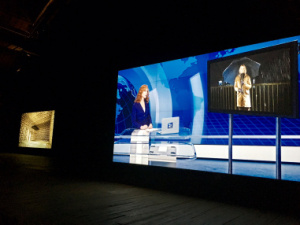 On the night of her Broadway debut, my plan was to talk about her career as an actress in such movies as Carol, The Curious Case of Benjamin Button, Blue Jasmine, Hanna, Babel, The Aviator, and the list could go on and on, but after taking in Rosefeldt’s astonishing installation, my focus has altered a bit. It did remind me of when she played Jude in I’m Not There, a rumination on the life of Bob Dylan. How she made us forget about the beauty that she is, and beguiled us into seeing only what she wanted us to see or hear or imagine. 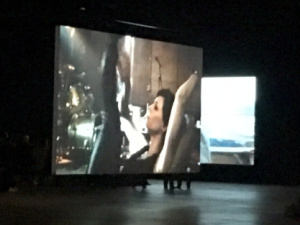 But what Rosefeldt has done here is beyond that. He has created something mind-blowing, significant, and in some ways, almost overwhelming. Walking into the vast space that is the Armory on Park Ave, it’s difficult to take in what assaults our senses. There are 13 large video screens spread out over this huge cavernous space. In front of each screen are benches and seats to recline on. We are beaconed to sit back and study each and every adventure that is presented. Linger over the individual passages, and truly listen to what is being said. At first it is difficult to absorb, as the experience of sound and imagery is overwhelming, but once our senses settle down somewhat, we find ourselves being pulled in to each and every moment and image. 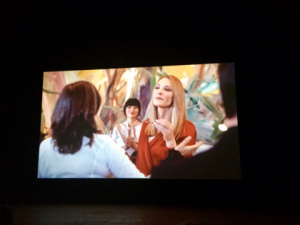 Rosefeldt amassed a number of influential manifestos, 50 in fact were chosen, from young artists who eventually became legends. Many of these artist I’ve never heard of, but each one created their own personal manifesto early in their respective careers. The topics variety including art, culture, society, poetry, literature, theatre, and performance. From the fifty, 13 distinct passages were created, blending segments together, editing and weaving them together, to represent different platforms, such as Dada, Futurism, Conceptual Art/Minimalism, and Surrealism/Spatialism. Each screen shows a 12 1/2 minute video presentation starring the magnificent Cate Blanchett inhabiting a central role in each of the 12 dramatic vignette (one is more of an introduction with just an image, and in another, she plays two characters). The monologues are fullsizerender-17delivered within the context of the vignette, and although they aren’t literally entwined to the visual, the ideas are connected, profound, and engaging. 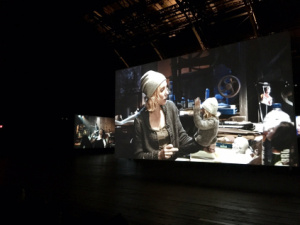 “Abandon love, abandon aestheticism, abandon the baggage of wisdom” (Kazimir Malevich, 1916); “Steal from anywhere that resonates with inspiration or fuels your imagination” (Jim Jarmusch, 2002); “A cool early morning wind is blowing around us; he who doesn’t want to shiver must stride out” (Bruno Taut, 1920). (Quotes collected and published in the NYTimes article, “Cate Blanchett Morphs a Dozen Times in ‘Manifesto’ by Robin Pogrebin, Oct 25, 2016” 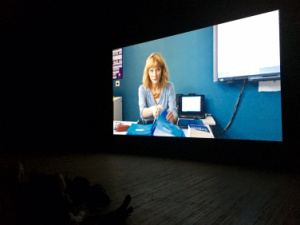 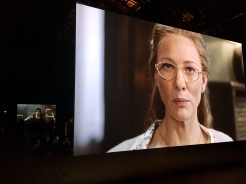 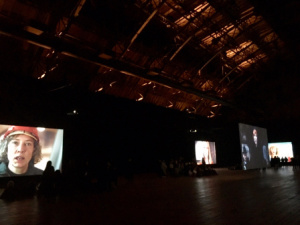 It’s a lot to take in, and I must admit that it took sometime to completely get past the feeling of being overwhelmed with the conceptually intense dialogue, which, I might add, is surprisingly profound in terms of the current situation of the world we live in. There is an idea that hangs over the whole space, that is asking us, as a member of our current culture, to take the time to listen to these important words. To go far beyond what is currently the norm, and invest our attention to the highly theatrical spirit of discourse and rebellion. Rosenfeldt felt that maybe the world has a unspoken need, and maybe even a hunger for something more than a tweet or a short proclamation on social media. To revolt again the “populists of our time” and take in a bigger idea rich in meaning and prophet-like concepts. In one moment midway through the 12 1/2 minutes, all 12 Blanchett creations come together and almost sing a unified discourse that is both abstract and startling. The 12 become unified in theme and ambition, giving us a raw and exciting moment of engagement, possibly jolting us out of passivity.

To sit in front of each is to be bombarded with a high level of intellectualism and grand thinking about what is happening to our world, what is wrong with our world, and what we need to do. Rosenfeldt states that each manifesto, although not presented in their entirety, aren’t meant to be taken in on their own, but to be compiled and compared in an never ending dialogue of constructive debate. Blanchett has outdone herself by inhabiting these 13 different characters in these 12 different setups, each as powerful and engaging as the next. Hours could be spent taking in one after the other, before circling around and re-engaging again with an old familiar face, searching for details in the abstractionisms. Highly theatrical and definitely star-driven (would this arena be filled if there was no star power within the video presentations?), it is also supremely inventive and exceptional. The show, I’m sorry to say is closed, but maybe somewhere it will pop up again, and if it does, find a few hours to spend gazing at the wonder of Blanchett. But in the end, be ready to be moved by far more then her exceptional talent.