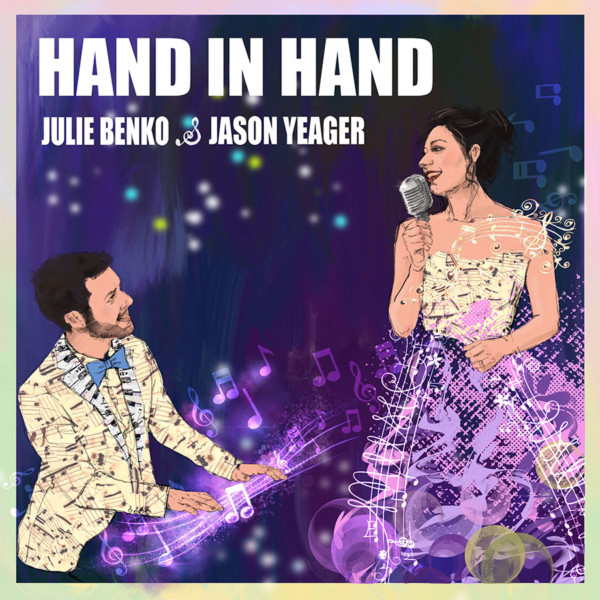 Club44 Records will release Hand in Hand – the debut duet album from the married musical team of Julie Benko and Jason Yeager – on CD and in digital and streaming formats on Friday, August 26. The pair will celebrate the new recording with a concert at Birdland Jazz Club on Monday, August 29 at 7:00 PM. Tickets are available HERE. Benko is a singer and actress who is currently appearing as the “Fanny Brice” standby in Broadway’s Funny Girl; she will take over the role from August 2 to September 4, and then every Thursday starting on September 8. Jason is an acclaimed jazz pianist and composer who has played concert halls around the world. Hand in Hand includes theater favorites (“People” from Funny Girl, “All I’ve Ever Known” from Hadestown), jazz standards (“The Nearness of You,”), and pop hits (“Mercedes Benz”), in addition to Yeager’s original songs. Benko is featured on vocals, clarinet, flute, and percussion, with Yeager playing piano, Wurlitzer, Rhodes, celeste, organ, and percussion. Hand in Hand is produced and arranged by Julie Benko and Jason Yeager. The album’s first single is a charming take on “Louisiana Fairy Tale,”the 1935 jazz classic popularized by Fats Waller, which will be released on Friday, August 12. A special EPK about the album’s background is available online HERE. The album will be available to pre-order on Friday, August 12. 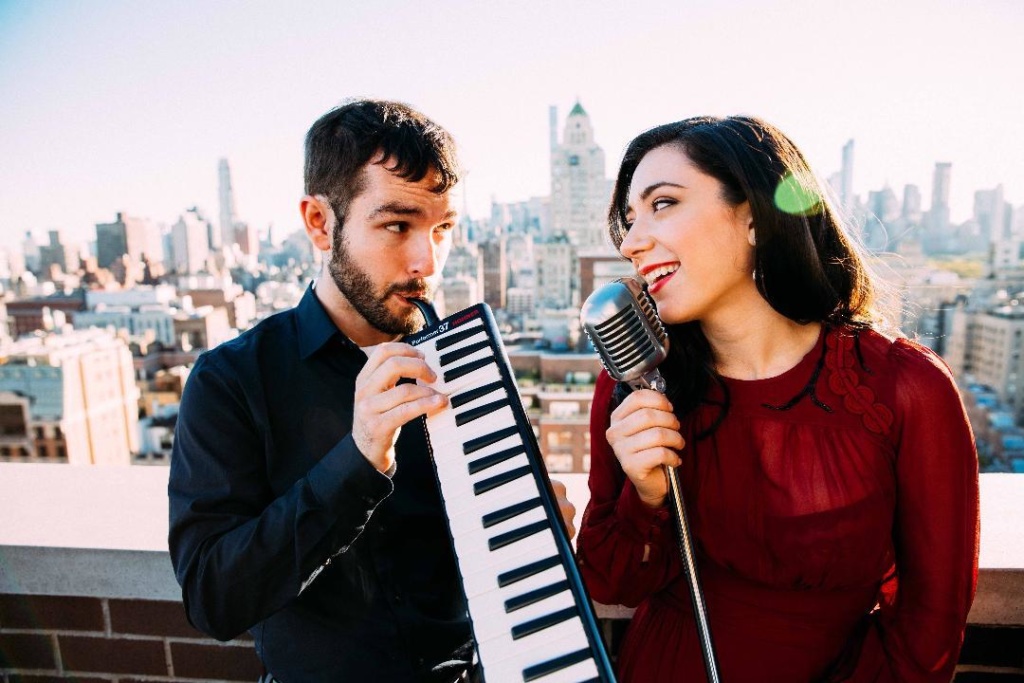 “Making this record was so rewarding because it feels like an extension of the beautiful intimacy of our life together,” says Julie. “Every single sound on the record was created by one of us. Making music together is one of the unique ways in which we can celebrate, support, and communicate with each other. The fact that we were the only two musicians on the record gave us freedom to be creative, and to try experiments that came to us spontaneously. We obviously have a real comfort together, which makes the musical process feel free and flexible. When I listen to the way we play together now versus the way we played together on my first record, it’s clear that our musical communication has taken major steps forward. Maybe that’s our marriage coming through; maybe it’s that we were quarantined together as our sole musical partners for over a year during the pandemic.”

“Every song that we chose has such a special meaning to us and has grown with us in our relationship,” Jason continues. “And then to be able to come home from the studio and set up microphones in our office and play around with adding extra musical layers, whether that was adding new instruments to the mix or backing vocals, was simply fun. At one point, we tried to capture our cat’s purr – his name is Thelonious Monk – and hide it in the percussion somewhere, but we couldn’t find a way without ruining the music. So, instead, we gave him a featured portrait on the back of the album artwork.”

With Benko’s Broadway roots, it was natural to feature several musical theater selections. Jule Styne and Bob Merrill’s “People” from Funny Girl is included, with the pair offering a romantic, bolero-inspired piano-voice take on the material. “I especially enjoyed finding our own spin on the Broadway tunes,” explains Julie. “With ‘People,’ what are you going to do… copy Barbra? What’s the point of that? So we tried to find the spirit of the scene the song grows out of. It’s a moment of intimacy, reflection, and seduction, which led to our delicate version.”

On Anaïs Mitchell’s “All I’ve Ever Known” from Broadway’s Hadestown, the Tony Award-winning “Best Musical,” Jason plays piano, organ, and cajón with Julie singing lead and background vocals. The couple first saw the show Off Broadway in 2016 and were dazzled by both the music and imaginative retelling of this classic Greek myth. Julie said, “This is amazing! It will definitely come to Broadway!” Jason was more dubious, replying, “Nah. It won’t do well on Broadway. It’s way too cool.” Mitchell’s New Orleans-inspired score was a natural fit for the Broadway and jazz pair, who themselves share an obsession with the history and music of New Orleans. As newlyweds, the two were particularly drawn to this song, which Orpheus and Eurydice sing together at the beginning of their love story.

A lilting take on Frank Loesser’s “If I Were a Bell” from Guys and Dolls and Jason Robert Brown’s “Another Life” from The Bridges of Madison County help round out the record’s musical theater repertoire. Reflecting on the second song, Jason adds: “We love Jason Robert Brown because he has such a strong and specific musical voice that bends into jazz, folk, and Latin vocabulary at times. That feels like a natural fit for us, since we do the same. And we are doing what jazz musicians have always done: reimagining and improvising on great songs from the theater in a personal and expressive way.”

Several other selections reflect the couple’s love of New Orleans, including the standard “Do You Know What It Means to Miss New Orleans?” “It is our favorite place in the world,” Jason comments. “It’s the only city where jazz is celebrated in the streets. Julie even wrote a play – recently named a semifinalist at the 2022 Eugene O’Neill National Playwrights Conference – set in Storyville, which some consider the birthplace of jazz. After we visited the first time, we could not stay away from this magical place. We try to return every year. In the meantime, we drink coffee with chicory from Café du Monde every morning.”

A special highlight is the pair’s joyously raucous version of the Janis Joplin hit “Mercedes Benz.” “We know that Janis’s raw aesthetic and original a capella arrangement might make this song seem an unlikely choice for us,” says Julie. “We had no sheet music or particular arrangement, just a fun romp on voice and Wurlitzer, with Jason simultaneously stomping his foot. Later, we decided to overdub additional layers of clapping, keyboards, and more stomping. It helped create an enhanced tapestry of rock ’n’ roll magic that makes it feel as though a whole crowd is rocking out with us.”

In addition to their love of classic idioms and vintage tunes, Julie and Jason thought it was important to include new songs for a new generation. One of Jason’s original compositions, “Sweet Pea,” is dedicated to legendary jazz songwriter-pianist Billy Strayhorn – composer of “Take the A Train,” and Duke Ellington’s longtime collaborator – who lived just a few blocks from the couple’s Harlem apartment and whose nickname was “Sweet Pea.” The poignant second original, “Just Begun,” features a melody Jason composed for Julie to walk down the aisle to at their wedding. The lyrics were added for this album.

“I’m very excited to be teaming up with Club44 Records for this project,” Julie concludes. “The team has been incredibly supportive, cheering our music as a duo and cheering me from the audience of the August Wilson Theatre. We are thrilled to be working with such an enthusiastic, genuine, kind group of people to bring this music to the public.”