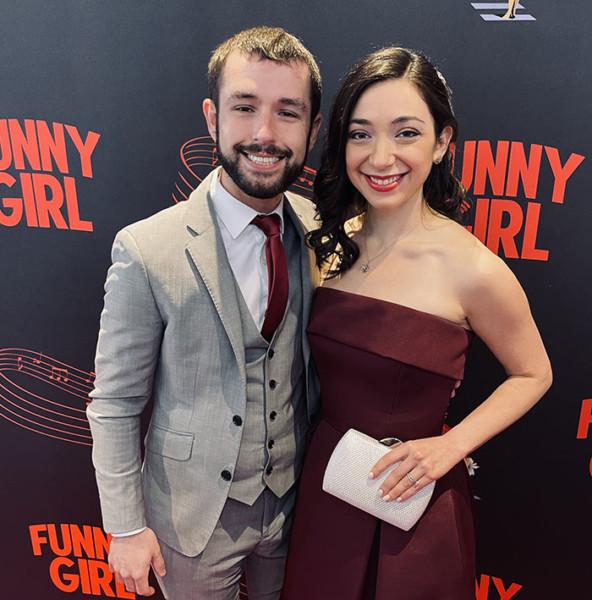 Remember we told you to keep your eyes on Julie Benko the understudy on Broadway’s Funny Girl?  Well CLUB44 RECORDS just signed the married musical team of Benko and Jason Yeager for their debut duet album Hand in Hand. Benko is emerging as a star Jason is an acclaimed jazz musician and composer who has played concert halls around the world. Hand in Hand includes theater favorites (“People” from Funny Girl, “All I’ve Ever Known” from Hadestown), jazz standards (“The Nearness of You,”), and pop classics (“Mercedes Benz”), in addition to Yeager’s original songs. Benko is featured on vocals, clarinet, flute, and percussion, with Yeager playing Wurlitzer, Rhodes, celeste, organ, and percussion. The album is scheduled to be released on Friday, August 26 to coincide with Benko’s next previously-scheduled weekend of performances in Funny Girl.

“I couldn’t be more thrilled to release our upcoming album on Club44 Records,” says Julie Benko. “Jason and I spent the pandemic isolating together, essentially becoming each other’s sole musical collaborator for a while. It was in this time—leading up to our wedding—that we developed most of these arrangements.  I think the intimacy and joy of that moment is evident on every track of the record. We had so much fun discovering our own interpretations of Broadway tunes and the Great American Songbook, as well as recording two of Jason’s original compositions. This album is a true celebration of love—for our community, for social justice, for theater, for music, for each other. I am so proud that Hand in Hand has found its musical home at Club44, and I can’t wait for the world to hear it!”

Joel Lindsey, co-founder and A&R Director of Club44 Records, adds “A colleague sent me a rough recording of Hand in Hand and said, ‘I know you’re not really looking for anyone new to sign right now, but I’d love for you to listen.’ She was right; we had our hands full and our release schedule was stacked up nicely the way we wanted it. But I gave it a listen anyway. By the third song, I was hooked! I started forwarding the project to other colleagues asking them to listen. There are a lot of reasons why a record company signs a project but, in this case, we simply fell in love with it and, once we met them, we fell in love with Jason and Julie! This may be the first you’re hearing of Julie Benko and Jason Yeager, but I promise you it won’t be the last!”

Julie Benko is an award-winning actress, singer, and writer based in New York City. She has performed on stages on and off-Broadway and across the country, including recent Broadway turns in Fiddler on the Roof and Les Misérables. She is a recipient of the Wilde Award for “Best Leading Actress in a Musical” for her performance as Girl in Once. She also received a BroadwayWorld Award nomination for “Best Leading Actress in a Musical” for her portrayal of Luisa in The Fantasticks, as well as Theatre Bay Area Awards and SF Critics Circle Awards “Best Featured Actress in a Musical” nominations for Rags. In addition to lending her voice to the 85th Academy Awards and the 70th Tony Awards ceremonies, Julie took home the Gold Medal and the Johnny Mercer Award in the national American Traditions Vocal Competition. In spring 2021, she was named a semi-finalist in the international Lotte Lenya Competition. Her debut jazz album, Introducing Julie Benko, is currently available. Julie recently wrote, directed, and starred in her first short, “The Newlywed’s Guide to Physical Intimacy.” The film won an Honorable Mention at its 2020 premiere at New Faces New Voices Film Festival. Her first full-length play, The District, received a public reading at Astoria Performing Arts Center in 2021 and is currently in development. She has a BFA and MFA from NYU’s Tisch School of the Arts. JulieBenko.com. Instagram/Twitter/TikTok @JujujulieBee

Jason Yeager – the New York City-based pianist, composer, recording artist, and educator – creates music that is deeply expressive and multi-faceted, defying convention while reveling in the traditions of Black American Music, jazz, blues, 20th century European classical music, and Latin American folk traditions. This year, he will also release Unstuck in Time: The Kurt Vonnegut Suite (Sunnyside Records) with his eponymous septet and special guest soloist Miguel Zenón. Yeager has released five albums of original music, including All at Onceness (called a “compelling new album” by the Boston Globe); United (named a “Best Album of 2017” by Downbeat); and his latest, New Songs of Resistance. Yeager has performed across the United States at such venues as Carnegie Hall and Birdland, and abroad at festivals and concert halls in Argentina, South Africa, Panama, China, the Dominican Republic, and Costa Rica. A frequent accompanist and collaborator, he’s performed and/or recorded with such noteworthy artists as Luciana Souza, Jason Anick, Ayn Inserto, Fleur Seule, Ran Blake, Sara Serpa, Noah Preminger, Ben Monder, and Fernando Huergo, among others. Yeager is also a committed teacher, working with music students from around the world as an Assistant Professor of Piano at Berklee College of Music, where he has taught since 2012. He is an honors graduate of the New England Conservatory/Tufts University Double Degree Program, and holds a Master of Music with honors from the Berklee Global Jazz Institute. JasonYeager.com. Instagram/Twitter/Facebook/Tiktok @JYeagerMusic

CLUB44 RECORDS– based in the Music City of Nashville, Tennessee – is a new independent label which aims to highlight the Broadway, cabaret and jazz genres, preserve the American Songbook, and provide a home for artists who represent this timeless music. Following their premiere studio release, Christmas at Birdland, the label has presented Love Notes, the latest album from Tony Award and Golden Globe winner Linda Lavin; Billy’s Place from Grammy Award winner Billy Stritch; Act One from rising vocal star Nicolas King; Jane Monheit’s Come What May, which celebrates the international Billboard #1 pop/jazz vocalist’s 20th anniversary as a recording artist; Spencer Day’s Broadway by Day, highlighting creative arrangements of theater standards; and Carol Sloane’s Live at Birdland, an intimate set captured at the legendary venue. Club44 Records also serves as the creative home of many other singers, instrumentalists and writers. All releases are distributed digitally through Universal Music Group and to retail outlets by Provident/Sony. Club44Records.com