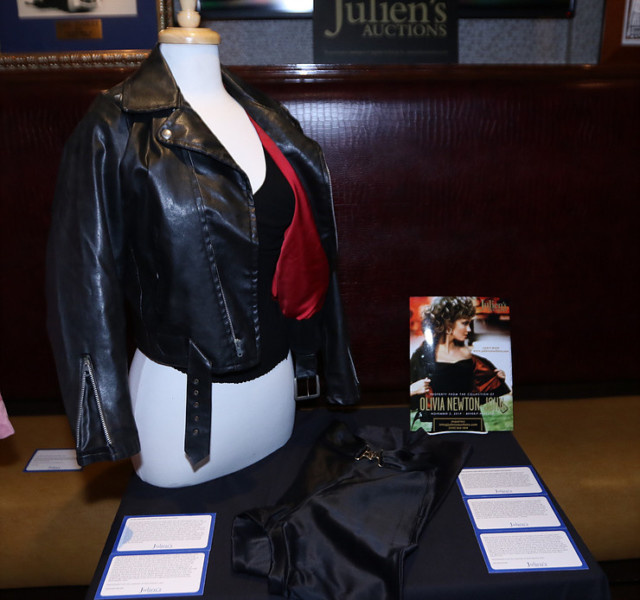 The sale of two of the most iconic items worn by one of the best-selling musical artists of all time were seen in her star making role as Sandy, in the blockbuster musical film–Grease. In the film’s finale number of “You’re the One that I Want,” Sandy (Newton-John) surprises Danny (John Travolta) with her transformation to a sexy greaser girl wearing a black leather jacket and pair of figure hugging black shiny high waisted pants that were so tight that Newton-John had to be sewn into them. The ensemble struck “Greased Lightning” today on the auction stage with the jacket selling for an astounding $243,200 and the pants selling for $162,500 for a combined total of $405,700. 100% of the proceeds from the Grease jacket and pants will benefit the Olivia Newton-John Cancer Wellness & Research Centre with a portion of all of the items sold benefiting the Centre as well.

Grease was the word among other top auction highlights that included: a one-sheet advance Grease film poster signed by Newton-John, John Travolta as well as other cast members, the director Randal Kleiser and producer/ songwriter John Farrar that sold for a stunning $64,000, sixty four times its original estimate of $1,000; a custom “Pink Ladies” jacket presented to Newton-John by the cast and crew of Grease (estimate: $2,000-$4,000) that sold for $50,000, twenty-five times its original estimate of $2,000; a fourth-draft script for Grease, dated June 9, 1977 with handwritten notes and front cover signed by Newton-John and John Travolta that sold for $35,200; handwritten lyrics for the song “You’re the One That I Want,” written by John Farrar, signed by Newton-John, John Travolta and Farrar and Newton-John’s personal Grease memorabilia collection  both sold for $12,500 each; her custom made 1950s inspired petal pink lace gown worn to the 1978 premiere of Grease at The Mann’s Chinese Theatre in Los Angeles that sold for $18,750 (estimate: $3,000-$5,000); her tan leather dance shoes worn by the star while rehearsing the dance numbers for Grease that sold for $11,250 and more.

Hollywood screen legend, Marilyn Monroe, outfits from Gentlemen Prefer Blondes, There’s No Business Like Show Business and River of No Return – as well as her signature style black cocktail dress likely worn to the 1958 press conference for her blockbuster film, Some Like It Hot also sold well.

The siren’s show stopping ensemble worn in Irving Berlin’s There’s No Business Like Show Business made heads turn once again when the gavel came down at the hammer price of $280,000. Worn by the star as “Vicky Parker” during the saucy “Heat Wave” song and dance number, the three-piece costume designed by master couturier, William Travilla, consists of a daring black silk bandeau sequined top with a hot pink and black silk sequined scarf that drapes over the left shoulder; a black floral print, decorated floor-length skirt lined with six layers of hot pink silk ruffles, accompanied by a black silk bikini-style bottom brief; and a classic, white over-sized straw hat. A design sketch of the costume in gouache and pencil signed by Travilla also sold for $11,520 (estimate $3,000-$5,000).

Other auction highlights included: an Italian-style carved wood ornate corner chair used by the star in her final photo shoot in July 1962 with Life magazine that sold for $81,250,

ten times it original estimate of $8,000; a mint green jersey silk Emilio Pucci skirt and top ensemble that sold for $46,875, well over its original estimate of $6,000; a brown and olive green striped couch used in her psychiatrist Dr. Ralph Greenson’s office during the time he treated the star that sold for $11,250, well over its estimate of $1,000; a black with blue satin bows bathing suit labeled “Metro-Goldwyn-Mayer / M. Monroe” that sold for $11,250; a crème-colored umbrella with a wooden hook handle used by the star then-called Norma Jeane in 1949 when Andre De Dienes took photographs of her at Jones Beach and at Tobay Beach on Long Island in New York that sold for $21,875, seven times over its original estimate of $3,000; a black silk jersey fabric with a gold and black “lace” print bathing suit worn by Monroe in the 1951 film, Let’s Make It Legal (20th Century Fox) that sold for $37,500 (estimate: $10,000 – $20,000) and more. The collection consisting of 115 of her most glamourous and personal items were sold at no reserve.