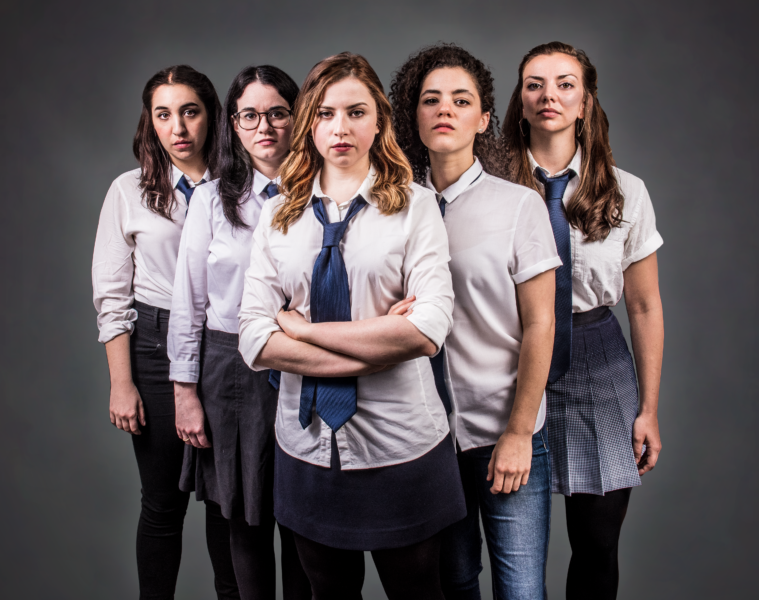 Pocket Universe’s all female production of Julius Caesar tackles the tone of the play with an interesting concept, though it isn’t particularly interesting to watch. Yet, the actresses are talented and have many intriguing and engaging moments.

Set in an all-girls high school, Caesar has just become the leader of the clique or perhaps the student government (it is unclear exactly), and quickly the plot against her ensues. The disgrace that Caesar, and subsequently the others face is social exile. The social “death” of each character is clear, and the interpretation of Shakespeare’s work in this context is commendable. There are many elements of this production to appreciate. First it is committed to the theme of high school. This is clear in the set, costume and prop design. The collaborative designers, Les Dickert, Katie Young and Alyssa May Gold, utilize chalkboards, chalk, school uniforms and friendship bracelets to create the vision of high school. Second, the production is committed to Shakespeare’s language. While there are a few things that are unclear, the very few words that are changed are appropriate to the concept and the names of characters were not feminized.

Under the direction of Katie Young, the actresses utilize the space well and they find moments to interact with the audience. While all of them deliver Shakespeare clearly and passionately, Madeline Wolf as Cassisus, and Violeta Picayo as Mark Antony stand out as exceptional. With a cast of six, each actress plays more than one role, and unfortunately, the clarity of who is playing which character is inconsistent.

Overall the production is theatrically uninteresting. The few intriguing moments with movement and music feel like blips of inspiration that are out of place in a piece that is simply people talking to each other. Because of this, the omission of intermission seems an unwise choice. The main success of this production is the integration of theme and the talented performance of the actresses.