Junie B. Jones The Musical – Entertaining Little Miss With Moxie 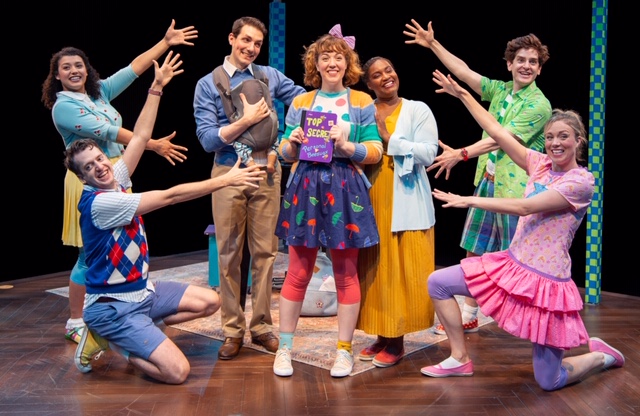 Junie B. Jones The Musical – Entertaining Little Miss With Moxie

Kicking up her heels in her Marriott Theatre debut, Junie B. Jones brought her signature quirky personality to a quickly paced, family friendly delight. For those not in the know, Junie B. Jones is a highly popular literary heroine of almost 30 titles aimed at beginning readers. This Random House success story has entertained the masses with almost thirty books in her well receivedarsenal. Taking snippets from four of her most  beloved adventures, Junie is armed here with her “top-secret personal Beeswax Journal” while preparing for her first day of a new school year. Director and choreographer Johanna McKenzie Miller kept the pace brisk while negotiating the highly relatable themes of change and the importance of rolling with the punches punctuate no matter what life throws your way.

Starring as the titular character, Junie B. Jones, Marriott staple Elizabeth Telford once again delivered her signature solid vocals. As her first grade bus commute beau, Garrett Lutz continued to charm as the shy Herb. Nebbish Sheldon (Jackson Evans) stole as many scenes as hearts he melted. As her former kindergarten best friend, Lucille, Allison Sill conveyed snooty, albeit cutie, drama, well as much drama as can be displayed in a children’s musical. Rounding out the cast, Lydia Burke as know-it-all May, the fabulous Rashada Dawan as Mrs. Gutzman, the most spirited, cookie crafting lunch lady to ever cross your path, and Adam LaSalle in a trio of roles; Junie’s father, classroom teacher Mr. Scary and Mr. Woo the bus driver, in a scene that stretches the imagination while simultaneously tickling the funny bone.  Sincerely, that number simply dominated the production.

The remainder of the creative team included Musical Director Ellen Morris, set design by Rachel Rauscher, Aaron Lorenz’s dramatic lighting with crayola crayon costume design by Amanda Vander Byl. There isn’t a bad seat in the house, with each member of the cast diligently selling it to the four corners of this theater in the round staging.  Outspoken and determined, there is nothing top secret about this zany adventure. Junie B. Jones proved herself the heroine of her own lively story, a narrative as important today as it was when the books started selling out over 25 years ago.

Junie B. Jones The Musical is now playing at the Marriott Theatre through August 11, 2019