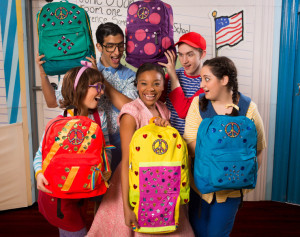 Junie B.’s Essential Survival Guide to School is based on Barbara Park’s best selling series of books, about a rambunctious little girl, who talks back to everybody and who has a bull name “El Toro Fabulous,” inside her stomach who makes her act obnoxious. You and your child can now follow her antics for an hour  at the Lucille Lortel Theater, where theatre is free until August 19th. Every year Theatreworks USA does a free summer theatre program and this year is one of their bests. With the score by Zina Goodrich and the book and lyrics by Marcy Heisler, this is a high energy impact show. Marcy and Zina wrote the Broadway bound Happily Ever After and Junie B. Jones another musical for Theatreworks.

The concept here is that Junie B. (Kristin Stokes) wants to write a guide to surviving first grade. Her teacher thinks it would be great to make it a great class project. However Junie B. wants to be the star of the piece, but her classmates have all the ideas especially her nemesis, May (Sara Glancy). Julie B. can not deal with the fact everybody else has great ideas and reacts poorly until May explains to her she doesn’t have to have a bull raging inside of her but a cow, which makes Junie B. much more tolerable and she is able to except the facts that she may not be all that.

It’s a strange story and as a parent why you would have your child read these is beyond me. This child is not likable and her predicaments outlandish. Kristin Stokes does her best to make us like Junie B. and she has a lot of energy, as does the rest of the cast. Sara Glancy all but steals the show with her laughter, quirky way of saying things, odd ball looks and her show stopping “School Supplies.”Whit K. Lee, Junior Mendez and Brandi Porter also make this cast first rate.

Peter Flynn’s direction and Devanand Jacki’s choreography keeps the show constantly on the move at a high octane level.

Standout out numbers include “El Toro Fabuloso,” where Junie B. compares her mischievous antics to a bull living inside her and “Backpacks on Parade,” where every child in the class gets to show their individuality.

Junie B.’s Essential Survival Guide to School is tuneful, fun and well performed. The show is perfect for any parent who has a child who has not yet learned manners and wants to show them why they are important.