Just Give The Tony To Bob Mackie For The Cher Show

Just Give The Tony To Bob Mackie For The Cher Show

The Cher Show at Broadway’s Neil Simon Theatre is pure entertainment and gives the audience what it wants. The Bob Mackie designer gowns and the fashion show in the middle of the show are worth the price of admission alone. 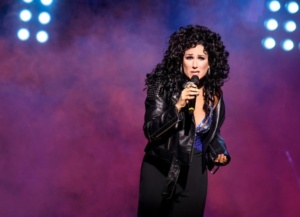 Though the show has problems structurally, the book by Rick Elice (Peter and the Starcatcher, Jersey Boys) is rather humorous and down to earth, especially when the wonderful Stephanie J. Block takes the stage. Channeling Cher, Ms. Block exudes the energy of Cher and her vocals, which made me wonder: why three Cher’s and not just one? In having three versions of the songstress, we lapse into The Donna Summer Musical. 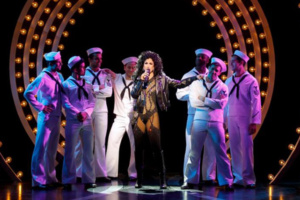 Ms. Block plays the “Star” version of Cher, looking back and giving advice to her younger selves. Teal Wicks plays “Lady”, the one who was featured in The Sonny and Cher Show. Ms. Wicks goes in and out of her Cher impersonation but is talented. Then there is Micaela Diamond as “Babe”, the 60s mod version complete with bangs and bell bottoms. Ms. Diamond doesn’t sound at all like Cher but has a great moment when she is dressed in gold talking about her film career. 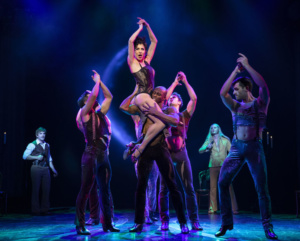 The choreography by Christopher Gattelli is energetic, high kicking, and very reminiscent of Vegas. His chorus looks hot and is body perfect. His gymnastic number with the fabulous “Dark Lady” (Ashley Blair Fitzgerald) almost stops the show with its wild applause. As does Ms. Block with her power ballads. 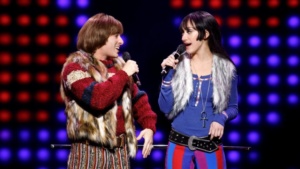 The show starts with Ms. Block looking sexy in a next-to-nothing catsuit singing “If I Could Turn Back Time”. Act 1 follows a young Cherilyn Sarkisian being comforted by her mother (a terrific Emily Skinner) with “Half-Breed” after being taunted and bullied. At 16, she meets Sonny (a perfect Jarrod Spector) and on Britain’s Top of the Pops, they sing “I Got You Babe”, which makes them famous. 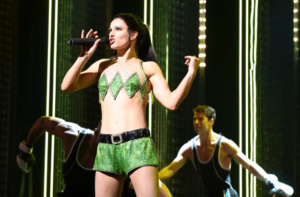 For the rest of the show we follow countless intervals of being broke, Las Vegas, The Sonny and Cher Show, the Bob Mackie (an underused Michael Berresse) connection, Sonny’s incessant control, a conversation with Lucille Ball (Emily Skinner), divorce, being broke again because Sonny took all the money, Gregg Allman (a spot on Matthew Hydzik), her failed TV shows by herself, and then with Sonny and Gregg, the pitfalls becoming an actress, the success with her film career, Oscar nominations, Oscar gowns, respect with an Oscar win, Sonny’s death, being broke again, her relationship with 22-year-old Rob Camilletti (Michael Campayno), otherwise known as the bagel boy, and her performing on stage now at 72. 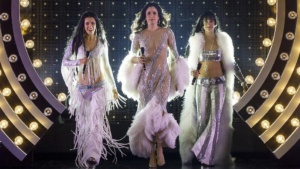 Jason Moore (Avenue Q) keeps the show moving, though at times it does seem more of an entertainment for Las Vegas. What is missing here is the heart. Sonny cheated on Cher. Her finding out would have been a real moment. Cher finding out Chasity wanted to become Chaz, another moment with heart, but I can understand why that is not in there. Also, her relationship with Elijah Blue. These things give the show grit.

We do however get fabulous arrangements thanks to Daryl Waters of  “If I Could Turn Back Time”, “The Beat Goes On”, “Gypsys, Tramps & Thieves”, “Believe”, “Strong Enough”, “You Haven’t Seen the Last of Me”, “I Found Someone”, and “Bang Bang (My Baby Shot Me Down)”.

You leave the theatre feeling you got your money’s worth and that you were entertained. Is it great art….no, but not everything has to be. La de da de de the beat goes on!

Suzanna BowlingAugust 3, 2022
Read More
Scroll for more
Tap
He Says: Gloria: A Life Projected on to the Stage Talking Circle
Network Is Changing The Game in Theatre