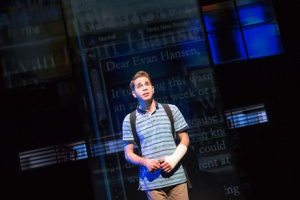 When I first saw the new musical Dear Evan Hansen at Second Stage, I was so overwhelmingly moved, I changed every vote I had to honor this show. With it’s near perfect score by Benj Pasek and Justin Paul, the songs hit emotionally connected highs and low and stick to your soul. The duo who penned A Christmas Story the Musical and Dogfight, managed to have songs that creep back into your memory days after seeing this emotionally searing show. The amazing orchestrations by Alex Lacamore (Hamilton), subtle direction by Michael Grief (Next to Normal), combined with a layered and truthful book by Steven Levenson, has Tony awards written all over it. Add to that the winning performances by the cast, but especially Ben Platt (“Pitch Perfect” 1 and 2) this musical will get under your skin and speak to you in so many ways. 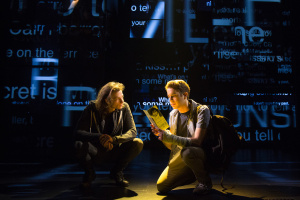 The show starts as Evan is given the task of writing encouraging letters to himself by his therapist. You see seventeen year-old Evan is not comfortable with who he is, has no friends, is afraid of people and can barely go outside his house. He is on medication, has a cast from a “fall,” is in love with a Zoe (Laura Dreyfuss) who will never notice him and in high school. Instead of writing an encouraging letter to himself,  he writes the truth of how he feels. The class bully Conner (the wonderful Mike Faist) who is actually no better off than Evan, steals the letter and ends up committing suicide. When Connor’s parents (Jennifer Laura Thompson and Michael Park) find Evan’s letter, they assume the note was written by their son to Evan. Evan tries to tell them the truth, but they are so much in pain that Evan allows the untruth to continue. Suddenly he has a family who cares about him and the girl of his dreams. The other misfits of the school (Kristolyn Lloyd and Will Roland) become involved, with Evan’s speech going viral. Together they start “The Connor Project,” a youth empowerment group and organize a Kickstarter campaign, to fund an apple orchard in Connor’s honor. When the original Dear Evan Hanson letter is published the web of lies threatens everyone in its wake. 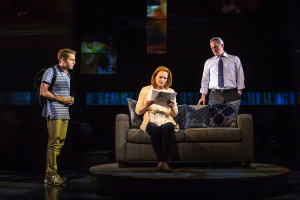 What makes this show so extraordinary is Evan is not a great person, but he is a realistic version of what is out there. Once the lies begin nobody truly wins, but as they grow and take up stock, they expose the best and the worse of everyone involved. In Evan’s song ”Words Fail” he finally owns up not just for himself but for the sake of others. It is an emotionally worthy song that Mr. Platt knocks out of the park while sobbing, falling apart and allowing us to see vulnerability on such a level it is inspiring. 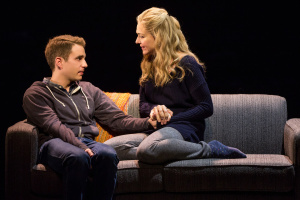 The rest of the cast is also emotionally connected, layered in what could have been one-dimensional roles and willing to let us see the flaws and strengths of their talents. The one character I have not named yet is Evan’s single parent, his hard working mother played by the exquisite Rachel Bay Jones (Pippin). Her depth and rawness is so passionate and understated that she is a joy to watch. 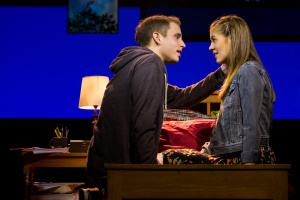 Michael Greif allows us to follow this tale and get sucked into it’s simplicity that turns so complicated in a flash. Pasek and Paul’s score is joyous, heartbreaking and fresh. When the trio of boys sing “Sincerely, Me,” you want to know the choreography by Danny Mefford (Fun Home) and join in. David Korins’s set, with video projections of Facebook posts, allows us to see how fast something can go viral and the dangers and strengths it brings. 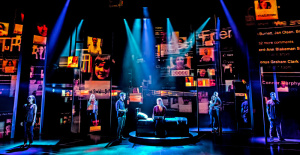 Here is an original musical that didn’t skip any steps, wraps it’s audience in it’s arms and allows the music, the story and the characters to do their job. This is a show that give out a message of hope. Here being an outsider is the norm, if only we would step out of our own pain to see that we are not alone.

One of the most amazing things that happened at the curtain call at Second Stage, but has continued and grows almost song after song, is the rock stadium applause that new theatre goers are bringing. Mark my words Dear Even Hansen could surpass Hamilton in its connection to an audience. Ben Patt’s performance is one for the history books, If he doesn’t win the Tony for Best Performance by an actor I would seriously be shocked. I know it is to early to even really discuss this, but there are once in a lifetime performances that go beyond what is on stage. Platt’s performance exceeds expectations.  Get your tickets now.

I have included Dear Evan Hansen‘s performance on Late Night with Seth Meyer, so you can see for yourself the amazing performances and music. This show is a must!!!!!!

Suzanna BowlingJanuary 22, 2023
Read More
Scroll for more
Tap
Master Harold… and the boys A Lesson In Not Bumping Into Each Other
The Bodyguard The Musical Pays Tribute To Whitney Houston