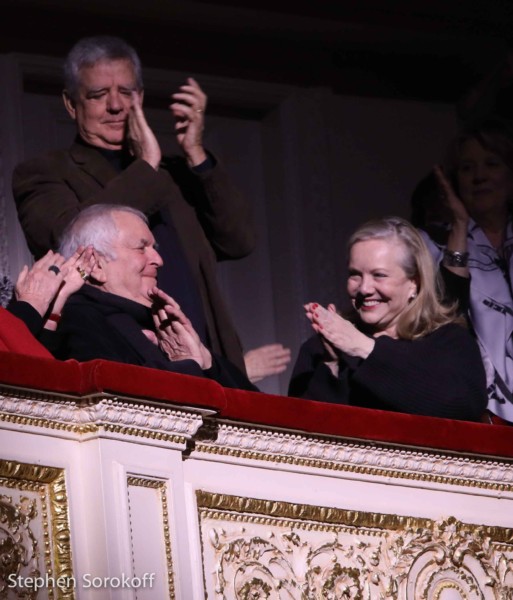 Kander and Ebb Shine at The New York Pops

Kander and Ebb Shine at The New York Pops 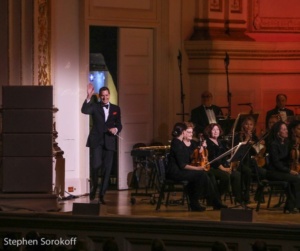 Last night, The New York Pops, continue its 34th season at Carnegie Hall with the iconic music of John Kander and Fred Ebb. As an early birthday present to Mr. Kander whose birthday is March 18th, the The New York Pops dazzled in their renditions of a medley and “Hot Honey Rag” from Chicago, “Minstrel March”from The Scottsboro Boys and the hot Latin samba “Gimmie Love” from Kiss of the Spider Woman. Under the leadership of conductor and arranger Steven Reineke, the 78-piece never sounded better adding banjo, and a really hot searing trumpet section. 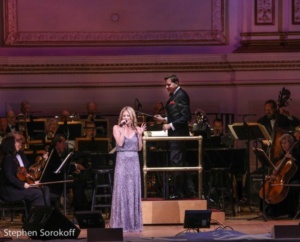 The concert featured highlights from Kander and Ebb’s five-decade partnership, with guest artists Cassie Levy and Tony Yazbeck. In listening to the concert you were deftly aware of how the iconic Liza Minelli was their muse. Nine of the songs performed were either penned for her or brought to life by her fabulous renditions. 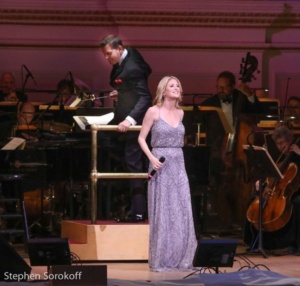 Ms. Levy who looked sensational in her gowns, has a effortless belt that soars in the material. Starting out with “Sing Happy” from Flora the Red Menace, to Mein Herr from Cabaret, Ms. Levy had the chops, but something was missing. It is truly hard to capture what has been in delved into our brains by such spectacular performances. 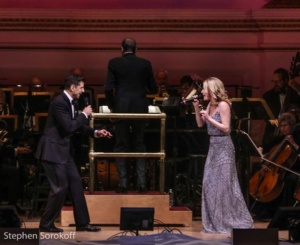 Next up were duets by Ms. Levy and Mr. Yasbeck from Cabaret. “Money, Money” and the title song “Cabaret” were highlighted and again Joey Grey and Liza or Alan Cummings performances have left marks that are hard to reach. Sometimes it is not how fabulous your voice is, but the way you bring the intention of the words across. It takes a really fabulous actor or actress to do this. Yazbeck started his solos turn out with “Coffee in a Cardboard Cup” from 70 Girls 70. Back to Chicago Ms Levy took on “Roxie” as Yazbeck showed us how he will sound when he plays Billy Flynn next month in “Razzle Dazzle” and “All I Care About Is Love.”Ending up the first act was “Ring Them Bells” written for the TV special Liza with a Z.

Tommy Newsom’s arrangement of “Gimmie Love” from Kiss of the Spider Woman was a smoldering way to start the second act and The New York Pops never sounded better. Ms. Levy returned with Streisand’s “How Lucky Can You Get” from the film Funny Lady. With just a piano the beautiful “Sometimes a Day Goes By” from Women of the Year saw Mr. Yasbeck on just a stool. I fell in love with this song when I heard Bryce Pinkham sing this at Birdland. I would have liked to have heard a orchestral version. 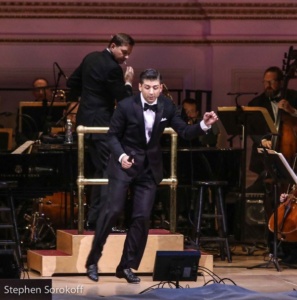 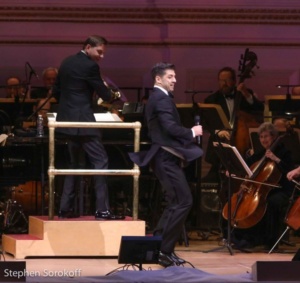 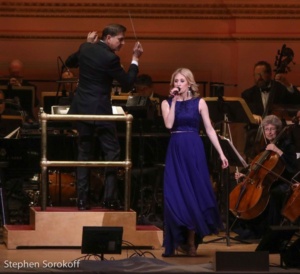 Ms Levy in the program was to sing “Colored Lights” from The Rink, but that number was skipped. She did however perform the comedic “Everbody’s Girl” from Steel Pier. This song was brought to life by the hysterical Debra Monk and again Ms. Levy missed a lot of the jokes. I really wished Leslie Kritzer was performing with the Pops, because these songs needed a comedian as well as a fabulous voice.

Yazbeck was brought back with “You, You You” from The Visit and “But The World Goes Round” from the film New York, New York. Yazbeck also let on that he was starring in John Kander and Susan Stroman new musical based on the  Henry James’ novella The Beast in the Jungle.

Ms. Levy finally had a star turn with “Maybe This Time” from Cabaret, which she nailed and hit out of the park. 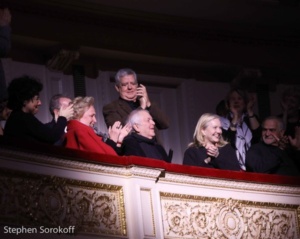 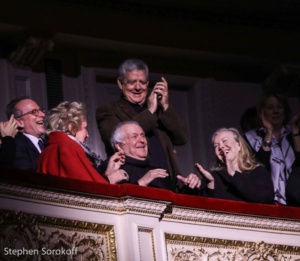 John Kander and Susan Stroman were in the attendance and the whole audience sang “Happy Birthday,” to this prolific American composer. 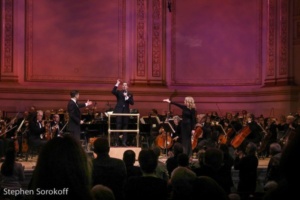 Rounding up the night up was The New York Pops, Ms. Levy and Mr. Tazbeck singing the theme song to our city “New York, New York.”

The New York Pops is a national treasure and it is always a pleasure to spend a evening hearing them.

The New York Pops’ 34th season will conclude with You’ve Got a Friend: A Celebration of Singers and Songwriters on Friday, April 21, 2017, 8:00PM  featuring Will Chase, Jessie Mueller, and Adrienne Warren. The concert will pay tribute to the soundtrack of a generation, inspired by the music of James Taylor, Carole King, and more. 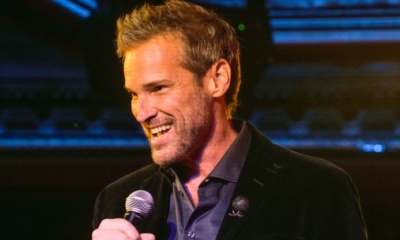 Stephen SorokoffSeptember 27, 2022
Read More
Scroll for more
Tap
My View: These Seats At Carnegie Hall Will Be Filled Tonight – The New York Pops Rehearsal
My View: Maestro Steven Rieneke Opens The Concert With The Most Well Known Song Ever Written