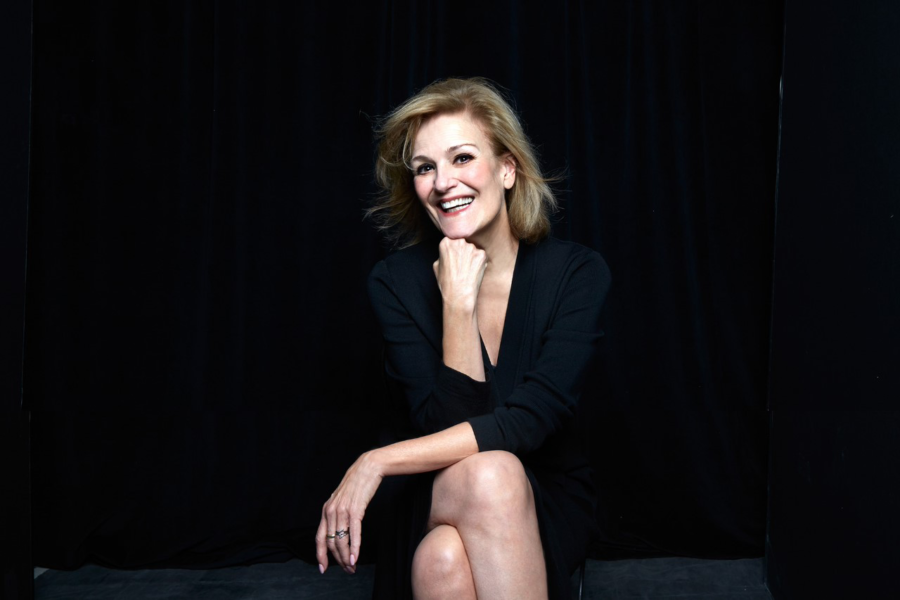 Karen Mason – the acclaimed Broadway star and concert artist – will present a special online video broadcast of her acclaimed show “Mason at Mama’s in March,” recorded at the legendary New York nightclub Don’t Tell Mama in 2015. The show will be available to stream on a strictly limited basis for three performance times only: Thursday, October 15 at 8:00 PM; Saturday, October 17 at 8:00 PM; and Sunday, October 18 at 3:00 PM. Tickets are $15 each and can be accessed at KarenMason.com

“Mason at Mama’s in March” – directed by Barry Kleinbort with Christopher Denny serving as Music Supervisor – is a historic, sold-out, critically-acclaimed concert evening celebrating her return to the storied New York club she helped open almost 40 years ago. When the show debuted in 2015, Stephen Holden in The New York Times hailed it was a “dramatic tour de force, a steady balance between interpretive insight and vocal showmanship.” In the powerful and heartfelt evening, Mason performs longtime fan favorites, selections from early in her lauded nightclub career, songs from her storied Broadway career, and highlights from her most recent album It’s About Time from Zevely Records.

“I absolutely love this show,” says Karen. “It was a party, singing every night to sold-out audiences…. pure joy from beginning to end! Finding the video one day at the beginning of our 2020 hunkering down, I fell in love again and knew I wanted to share this show, these great memories of opening night of Don’t Tell Mama, with my fans. Come join the party!”

A special part of the show is the new album’s title song “It’s About Time,” a fresh original composition written by Mason’s longtime album producer Paul Rolnick and Shelly Markham. Called “a subtle but profoundly moving call for marriage equality” by The Chicago Tribune, it was created for a wedding of Karen’s friends after Marriage Equality passed in New York State. “I was thrilled to be asked to sing at their beautiful day and told my husband Paul Rolnick, he should write this custom song for the happy couple. It continues to inspire me because I still feel the power of love and truth!  It’s about time for us all to stand up for what we believe.”

It’s About Time – according to the liner notes by longtime WBAI Radio personality David Kenney – is “yet another stunningly beautiful album of songs by one of the best girl singers on the scene today. What is on display here, beyond that powerful voice with the gorgeous tones or the brilliant actress, is the heart of Karen Mason.”

Karen, was recently seen as “Madame Giry” in the North American Premiere of Love Never Dies, Andrew Lloyd Webber’s epic sequel to The Phantom of the Opera, and is currently slated to return to Broadway in the Judy Garland musical Chasing Rainbows. She has starred on Broadway, Off-Broadway, television, and in the recording studio. She’s been praised for her “fierce emotion” by The New York Times, her “innate comic ability” by Playbill and her “delightful instrument” by the Daily News. Karen has been called “a master interpreter” by The Chicago Tribune, “a towering talent” by TheaterMania and “a dynamic performer” by Time Out New York. According to the Indianapolis Star, “Mason has a powerful voice and rich resonance you associate with Judy Garland or Barbra Streisand. She can sing slow and smoky or fast and punchy with an innate sense of humor. Mason is a poet of the vocal cords.”

Ms. Mason garnered rave reviews starring as The Queen of Hearts in Wonderland on Broadway in 2011. She originated the role of Tanya on Broadway in ABBA’s Mamma Mia, and was awarded a 2002 Drama Desk nomination as Best Actress. Her other leading roles include Norma Desmond in Sunset Boulevard, which she performed to critical acclaim and standing ovations on Broadway and in Los Angeles for three years; Velma von Tussel in the final Broadway company of Hairspray; “Monotony” singer, Mazeppa in Jerome Robbins’ Broadway; Rosalie in Carnival (another Drama Desk nomination); plus featured roles in Broadway’s Torch Song Trilogy; and Play Me A Country Song.

She won the Outer Critics Circle Award for her performance in And the World Goes ‘Round, and starred Off-Broadway in her own show Karen Mason Sings Broadway, Beatles and Brian. Her television appearances include the hit dramas “Ed”and “Law & Order: SVU” while film credits include Sleeping Dogs Lie and A Chorus Line.

In regional theatre, she starred in the 1st National Tour of A Christmas Story as Miss Shields, in the world premiere of the stage production of White Christmas (playing the Rosemary Clooney role at St. Louis Muni Opera), Side by Side by Sondheim (Coconut Grove Playhouse in Florida), Gypsy(Sundance Theatre in California), the world premiere of One Tough Cookie(Apple Tree Theatre in Chicago), Heartbeats (Goodspeed Opera House) and Company(Huntington Theatre in Boston). Karen starred in the one-woman musical about Dorothy Parker You Might As Well Live.

Karen has headlined Carnegie Hall, The Kennedy Center, Lincoln Center, Feinstein’s at the Regency, Rainbow & Stars, the Algonquin, Arci’ Place, The Supper Club and The Ballroom in NYC; The Cinegrill and the UCLA/ASCAP Concert Series in Los Angeles; The Plush Room in San Francisco; and Davenport’s in Chicago.

She has shared concert stages with Michael Feinstein, Jerry Herman, Chita Rivera, Luciano Pavarotti, Rosemary Clooney, Liza Minnelli, and John Kander & Fred Ebb, among others. Karen has given concerts in the United Kingdom, Sweden, Brazil, Scotland, Tokyo and Osaka. Her starring symphonic performances include The Long Beach Symphony Orchestra with Maestro Michael Berkowitz, the Philly Pops with Peter Nero, The New York Pops with Skitch Henderson, the Oklahoma Philharmonic with Joel Levine, the premier performance of The Chicagoland Pops, the Indianapolis Philharmonic, and the St. Louis Symphony with John McDaniel.

Her highly acclaimed recordings include her 2009 MAC Award-winning Right Here/Right Now, 2005’s The Sweetest of Nights, the MAC Award-winning When The Sun Comes Out, as well as three other CDs: Christmas! Christmas! Christmas!, recorded live at the West Bank Café; Better Days, featuring songs by her longtime composer/arranger Brian Lasser (including the 1998 Emmy Award-winning song “Hold Me”); and Not So Simply Broadway. Karen has been featured on the original cast CD of Wonderland; Jeffrey (Varese Sarabande), the studio cast recording of Wonderful Town (JAY Records), the original cast album of And The World Goes Round (RCA Victor), The Child In Me, Vol. 1 (Harbinger Records), and Lost in Boston II (Varese Sarabande).